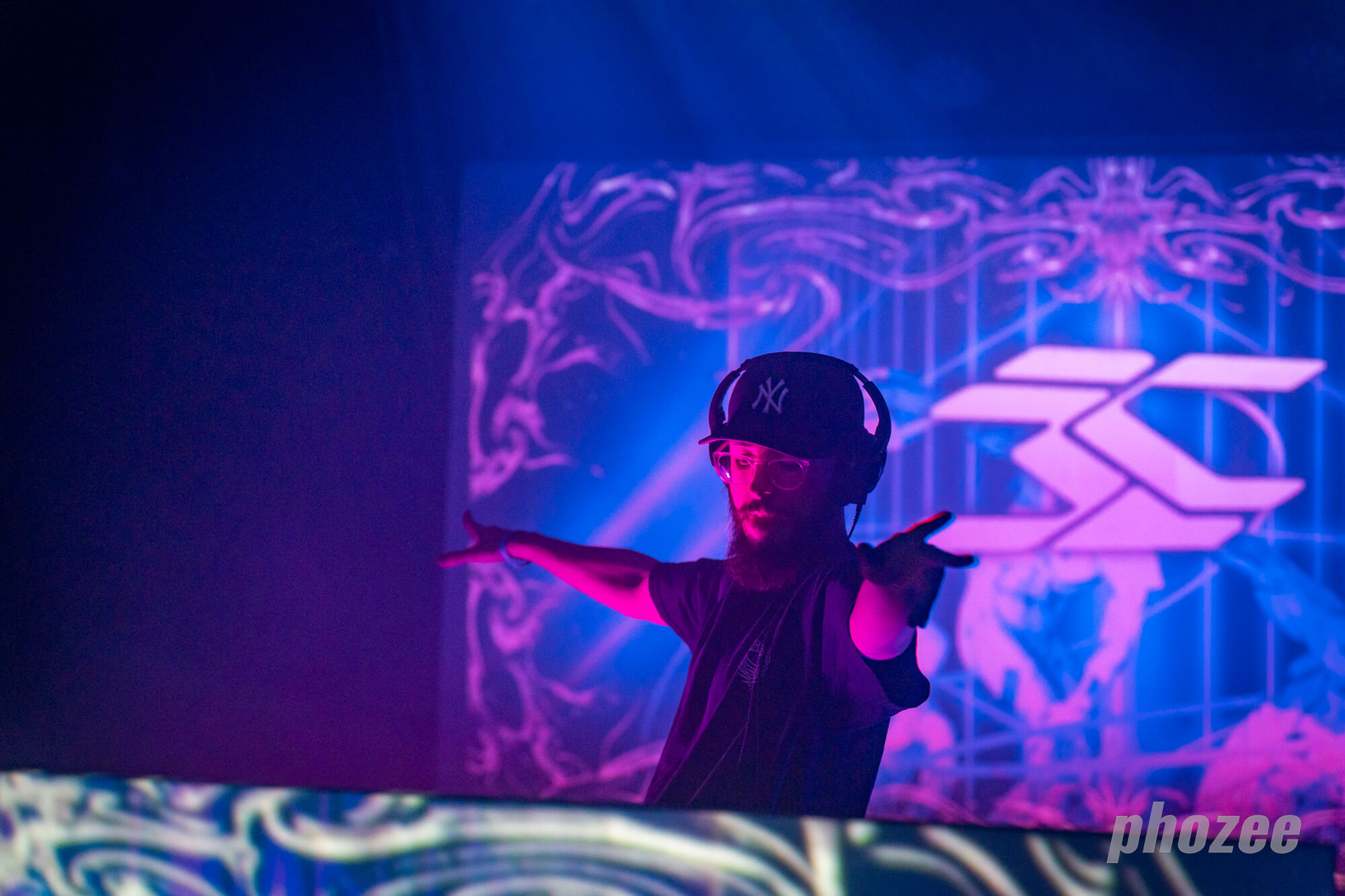 By Ambur MasenJanuary 19, 2023No Comments

When Just Connor moved to Denver a few years ago, it was to expand his musical influences and to be closer to the homies. Now, Just Connor has established the world’s first-ever wave music residency, Ever Eternal, alongside w/out and Phozee. This announcement came mere days after his soul-stirring performance at North America’s first-wave music festival, Pantheon. We’re left to wonder… is there anything JC can’t accomplish?

We caught up with this noble producer right after the holidays to chat about these incredible experiences. Read on to find out more!

Just Connor is a wave producer based in Denver. Known for having an interest in the emotional side of electronic music, JC’s discography is a journey through all things wave: the soft, the hard, and the otherworldly.

A true champion of the electronic underground, JC has been fostering the growth of the wave scene since its humble roots in 2013. Initially based in New York, Just Connor saw his beginnings in tiny Upstate bars alongside Noah B and Jessaudrey before finding his way to the City, where he collaborated on some of the first-ever wave shows in the United States.

These weren’t the most glamorous gigs; Just Connor’s dedication to bringing the early wave scene together saw “the homies” congregating in underground clubs and illegal spaces–wherever he could get them booked. This grew to more noteworthy events, like 2017’s Winter Wave show in NYC, which featured Plastician.

During this time, JC also released music on Plastician’s label, Terrorhythm Recordings, as well as with newer groups like vibe.digital. Still, the producer has remained independent for much of his career thus far.

In the late 2010s, Just Connor moved to Denver to experience “the bass capital of the country.”

During this time, the producer experimented with more of a hardwave style–but not exclusively. The 2020s saw his “Soft Vision” collaboration with Five Suns and multiple gentle, emotional collaborations with BACKWHEN.

As far as recent milestones go– in 2022, Just Connor was among the headlining artists for North America’s first-ever dedicated wave music festival, Pantheon. The energy during his set can be described as nothing other than “awe-inspiring.”

Just Connor is starting 2023 off with a bang: he continues his work as a champion for the underground by launching Ever Eternal, the world’s first wave music residency. This project is based out of The Black Box in Denver. The first Ever Eternal show has Juche headlining, with Just Connor in direct support.

Read on to find out about Just Connor’s experience at Pantheon–and what’s to come from this Ever Eternal showcase in Denver!

Just Connor on all things Pantheon, Ever Eternal, and more.

Ambur: To get us started, let’s talk a little bit about Pantheon. On Instagram, regarding the festival, you wrote this: ”Pantheon. You were the dream I had 10 years ago. A place to celebrate the music and the people I love.” — Do you care to elaborate on that statement? What exactly did you picture when you thought about wave music down the line all that time ago?

Just Connor: “The first show I ever played, I played to a room of 3 people [laughs].

I wanted to believe that we could fill a room with people who were there to hear our music, people who truly, genuinely are into the sound we’ve been so passionate about.

I’m so extraordinarily fortunate to have been included and provided the opportunity to perform, but the only time I was an artist was when I was on that stage– every single other moment, I was there as a fan.

I had the opportunity to witness so many of my favorite musicians and biggest inspirations performing at the absolute best of their ability, showing off how hard they’ve been working on their craft. I’m still processing it.”

Ambur: I think we all definitely are still processing it in some capacities. So- as a performer, in what ways was Pantheon a success? In what ways was it more of a learning experience?

Just Connor: “I only released one solo track in 2022. I’ve been keeping my head down, trying to work hard to reach a point where I’m proud of my music again, and having the opportunity to play out new songs and hear the crowd’s reaction was so reassuring to me. I now feel confident that I’m on the right path and growing as I hoped.

People can lie to you when you share songs for feedback, but those voices in the crowd screaming, “YOOOOO!”, “YEAH!!” or “WOAH!” when a drop hits, and it really resonates with them as a listener, or it really catches them off guard in a good way? You can’t fake that.”

Ambur: Absolutely– and the energy in that room during your set was transcendent, to say the least. So, you’ve been in this for nearly a decade, so I was wondering– in your opinion, where do we even go from here? 2022 saw The Wave Stage at OMF; 2022 saw wave music at the Amsterdam Music Event. 2022 saw Pantheon. What do you think is next for wave music? Or is this it? Have we ‘made it,’ whatever that means?

Just Connor: “Ktrek and Deadcrow on the same stage as Rusko at Sound Haven in 2022. Noah B at Triple Rainbow with GRiZ in 2022. Brownies and Lemonade brought out REMNANT.exe, Noah B, Deadcrow, Barnacle Boi, and Brothel–all for the same show. Static Angel with the OFFICIAL remix for Krewella?!

Last year reaffirms that there’s no limit–so you can’t say, “this is it,” or we “made it.”

So, where do we go from here?

Higher and higher. More and more. The future is extremely bright, and we’re going to see some incredible things as long as we continue to support our friends!”

Ambur: I love that–it’s still all about homies supporting homies, for sure. Switching gears–Connor, what can you tell us about Ever Eternal’s inception? How did you all get that started?

Just Connor: “It all started when we met the team at the Black Box when Dani [w/out] and I played the Deadcrow show in the main room last year.

Deadcrow put the supporting acts lineup together for the show and asked Dani to play, and then Dani asked me if I’d like to go B2B with them because they knew that playing the Black Box was a long-term goal of mine and that lineup was one I’d kill to be on.

We had a couple of wonderful conversations with the team there, and they reached out to Dani via email a few months later to ask if we’d like to start a monthly! Dani asked me to work on it together with them, and we brought Neil (Phozee) on board not long after!”

They’ve got their finger on the pulse of the underground and are always paying attention. In addition, they have a genuine love and passion for music that many venues don’t have.”

Ambur: Do you have any long-term goals for the residency that you’d like to share? Does the team have any dream showcase bookings?

Just Connor: “Yeah, of course! We really hope we can share the wave sound with people who don’t already know they love it–that’s the goal. If, through our Ever Eternal nights, we can turn at least one person onto the wave sound who wasn’t a fan prior. Then I’ll consider it a resounding success.

Aside from that, we’d like to throw a show in the Main Room, of course! I won’t talk about any bookings that haven’t happened yet–call me superstitious, but I know people will be stoked when we announce our future lineups!”

Ambur: Lastly, what are you most excited about when it comes to the January 28th show? How about for the rest of the year?

Just Connor: “Having the opportunity to see a full Juche set live is something I’ve wanted for years. I’ve been a massive fan of his music since I first heard the “Cheongdam” release on Yusoul years ago.

I think I’m the most excited about sharing something that means so much to me. I’m hoping we see a lot of unfamiliar faces at our first show. I can’t imagine a better lineup to really showcase the wave sound. Both Psycody and 00e1 are people who I’ve been a fan of for years and who have inspired me personally.

“Healing Waters” by Psycody is one of my favorite songs of all time, and 00e1’s “00E1” through “00E5” series was instrumental to the growth of the sound as we know it.

Just Connor: “We haven’t had a Psycody set in Denver since 2019, and this is the first-ever 00E1 set, which is super exciting.

For the rest of the year? We’re going to continue to bring out our favorite artists and use our platform as an opportunity to share how much incredible talent we have in Denver.

I’m putting the finishing touches on a new EP, something I’m very happy with and excited to share.

More on that when the time is right! Thanks for talking with me!”

Excited to see Just Connor & the homies at the Ever Eternal show?

Listen to all of the artists featured at the first Ever Eternal show below.

The show is free, but be sure to double-check all of the details at the Black Box’s website here.