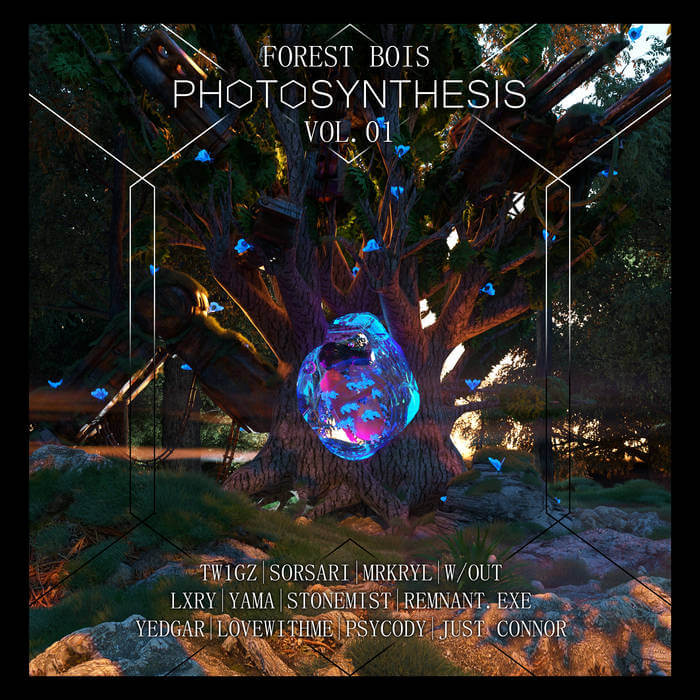 By The Electric HawkJanuary 22, 2020No Comments

The FOREST BOIS Photosynthesis Vol.1 compilation balances the lightness of a humble project among friends and the gravitas of a style-pushing zeitgeist embodying sonic moment. The wave compilation literally celebrates nature with all of the proceeds going to the National Forest Foundation.

Anyone familiar with this corner of bass music could have a general idea of what to expect from a compilation like this. Expectations are subverted despite seminal names doing what they do best. The listener is excited from start to finish.

From just connor‘s ambient ballad to yedgar‘s euro bass urgency journeying through without engaging use of acoustic percussion. The landscape continuously shifts and mutates while nurturing the emotion that makes this genre so special.

So what is Photosynthesis Vol. 1?

From its genesis to the final delivered product, this compilation confronts us with an unexpected contemporary incarnation of Romantic Sublime. Artists coming together to create something they believe in without being bound by expectations, deadlines and rigid pre-existing parameters.

Rather than envisaged as a divine threat as it was in the 19th century, organic life is here musically portrayed for the tragic fragility of its current state. Origin, destination, refuge and self-sufficient whole, are all facets which can only be experienced in the wilderness.

The wave compilation is almost meditative

lovewithme’s delayed synth on “Orchid” sets the tone with a moody, aura-heavy track that provides scale and direction for the following chapters of this story. just connor’s “the comfort of silence”’s deceiving lightness furthers this feeling, but switches perspective. Its nebulous soundscape and vaporous depth play as if one was looking up to the clouds; their intangible masses seemingly immobile yet endlessly moving.

Revitalized by this breathing ballad, the listener is ripe to accompany YAMA’s cathartic emergence from his “Chrysalis”, which keeps a motivating momentum going throughout. TW1GZ X REMNANT.exe‘s “Phase 2” builds up a crescendo epic scale by invoking a cultural dialogue with the east favored by Romantic European painters like Delacroix and his peers.

LXRY’s contribution, “Photophobia”, is grimey and melancholic, thanks to its echoing vocal samples. It filters the reminiscent lightness and hopefulness which are similar to the compilation’s opening tracks.

Then there’s w/out’s “I’m Fine”. The acoustic percussions that suggest a lingering dread ground the bittersweet melodies. Once the second drop hits and the distressed vocals come in, we feel its sentiment even more. Stonemist prolongs this with “Outcry”. The producer provides a brief synth-driven parenthesis before MRKRYL’s “Capsizing”—the atmospheric tipping point of this second half. Like a post-tragedy assessment, the song navigates between laments and realization, especially in its heartfelt second section.

Urgency finally reaches its culmination with Yedgar’s “When The Stars Align”. The track marks a true narrative hinge best listened to with the chest, because that’s where the song naturally vibrates.

“Mycorrhizae” finally plays, serving as a fitting conclusion. A complex agglomeration of emotions, it contains all of the feelings explored thus far within itself. The song’s melancholy eventually slows down into a rhythmically pressing soft sob. It reminds us how it feels to be too realistic to be hopeful, but too enamored to be devastated.

As a result, it features some of the most creative and original work associated with the minds, hearts, and hands behind it. FOREST BOIS is what Friedrich’s monk is bumping in his wireless Bluetooth Bose earphones while he loses himself in the sea. BIG. FOREST. ENERGY.

Listen to the Forest Bois Photosynthesis Vol. 1 compilation below: