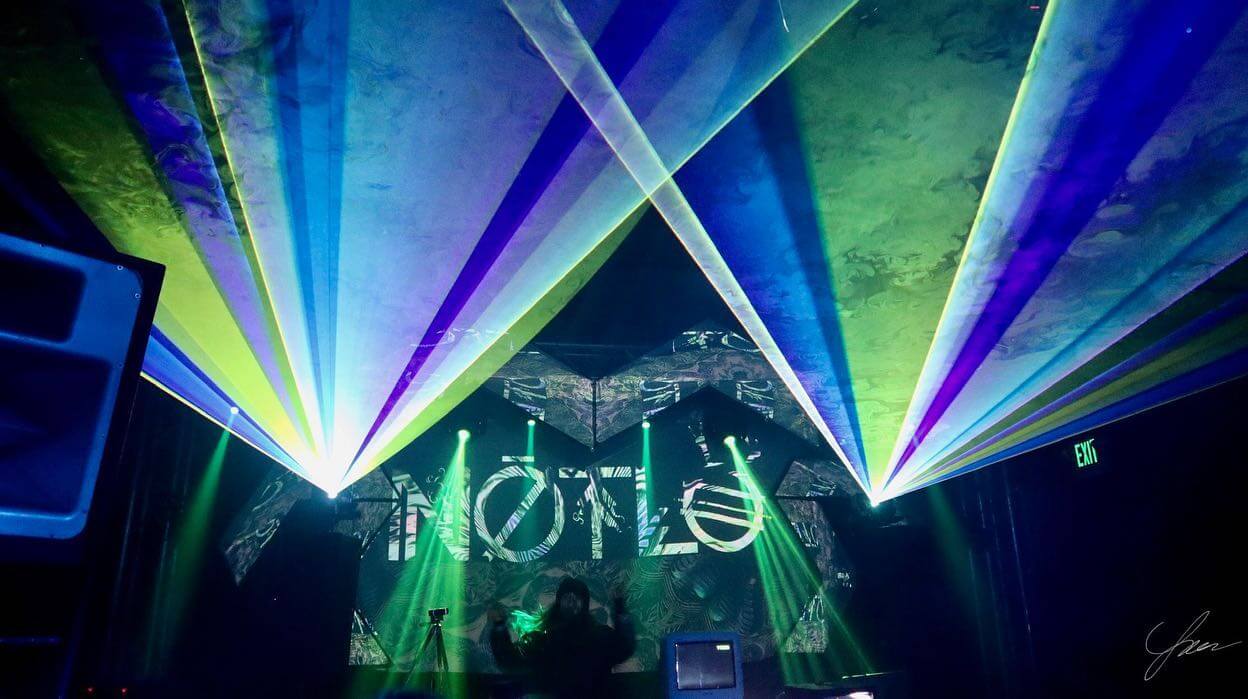 The Black Box Denver has set the standard for safe, professional, socially distanced music events. Unlike the commercialized drive-ins and dance clubs, you won’t find bright LCD screens, lasers, or gimmicky pyrotechnics here. Instead, only some elegant, Victorian-esque decorations. And one of the top-rated sound systems on the planet. The focus in this venue is the music, especially the lower-end of frequencies.

The Black Box has always been known to be the home for underground music, as exemplified in their motto “Moving People Through Sound, Not Hype.” In fact, this wasn’t the first NotLö show here; only last year she was part of a Locals in the Lounge NotLö & Friends night. The skill and exuberance of her performance clearly indicated that she was worthy of more attention in the scene.

Alex Mantekas, AKA NotLö, is a Denver resident and unofficial “mom” to the underground music scene.

Her SoundCloud alone boasts dozens of independently released tracks, 2 full-length EPs, and a significant number of collaborations. Who knows how many unreleased bangers she has hidden away on hard drives?

Receiving well-deserved praise from EDM heavyweights GRiZ, Ternion Sound, and Khiva rinsing her tracks, she simultaneously receives accolades from collectives such as Wakaan and Mean Mug Music. She was even featured right here on Electric Hawk Radio. It’s no wonder she was recently announced as the newest member of Deep, Dark, and Dangerous.

After finding a love for experimental bass, NotLö relocated from her home in Greenville, NC to pursue a career in music.

At the time, and even now, males are dominating the club scene. Drawing from her experiences as a woman leader and LBGTQ individual, she knows what it’s like to face discrimination. Alex is actively seeking to help those who society marginalizes and give them a platform to feel seen and heard. Her live streams and concert proceeds have served to help raise money for cancer patients, Black Lives Matter, and RAINN. To me, the NotLö project exhibits and amplifies inclusion, acceptance, tolerance, and love. It does so without compromising the moral values of justice, equity, and compassion.

It should come as no surprise that for her debut set headlining the Black Box, NotLö curated a diverse lineup of local up-and-comers:

We caught up with Spirit Galore just after his set, and he had this to say:

This was actually my first show ever. I can’t believe Alex [NotLö] believed in me enough to have me open up for her. She’s always doing so much for us smaller artists, from liking/reposting songs to providing feedback. She’s an incredible leader in our scene.”

Her confidence in Spirit Galore was well placed. He established the vibe to an already sold-out room. With a soft intro quickly descending us into chaos, it was an eclectic first taste of the evening to come. Navigating a beautifully curated tracklist and peppering in some left-field and Neurofunk, the show was off to a great start.

Following up and wasting no time, Mauka took the stage. Energetically, he roused the crowd in appreciation for Spirit Galore. Praised NotLö for curating the event. And thanked the Black Box for hosting. Mauka dialed back the BPM, leading us on a descent through some of the grittier side of trap and deep dub. Showcasing unreleased tracks and custom edits of popular tunes before re-emerging on the other side. We made our way from 60-150 BPM seamlessly.

Next, Littykitter hit the stage with a vengeance. Showcasing his unique occultist-anime-meets-dystopian-cybergoth aesthetic through original tunes such as “Boxxy” and “Rituals,” he delivered a top-notch DJ set. Notable of which are his collaborations with NotLö herself and some crowd favorites (the Box popped off when he dropped Recorder Class w/ Yvga.) We were blessed with a broad array of sounds and genres all delivered through the focal lens of bass. By the end of his bewitching performance, the anticipation in the room was palpable. There wasn’t a single empty seat as NotLö approached the decks.

There was a significant energy shift in the room as the main event drew near.

Drinks had been reordered. Phones were put away. Videos began recording. Conversations ended. And all eyes were on the stage as NotLö’s debut premiere unfolded. All at once, we were travelers in a distant galaxy, shifting through an unknown ethereal dimension. Time and space cascaded away into the multiverse as the cosmic queen of bass music took the helm of our spaceship.

The intro came in hot and absolutely decimated all fearful expectations of just-another-DJ-set. However, after transitioning into the second track, there was an issue with a CDJ resulting in a loss of audio. For many artists, this would spell disaster and a complete meltdown on stage. NotLö rose to the challenge though. Immediately beginning signal routing and attempting to troubleshoot the issue while communicating with the house production team.

This exact thing is many artist’s worst fear and could absolutely derail an entire performance. Within moments, the sound was fixed and we were launched into an exploration of some of the most incredible sounds in modern music. NotLö blessed the attendees with a verbose all-original set. Throwing back to fan favorites from 2017, and playing unreleased tunes with equal tenacity and fervor.

Though bedroom producers and DJs may seem like a dime-a-dozen these days, NotLö’s music is distinctively different.

Having studied music in a traditional sense, she understands the rules, which means she knows how to break them effectively and with purpose. You’ll often hear complex and fully developed motifs within NotLö compositions. Some of her tracks clock in at over 5 minutes with every drop completely unique. Showcasing her talent for developing a plot, and telling a story through the soundscapes. There’s a reason it is said bass music is at the forefront of the Second Renaissance.

Hot on the heels of her live stream performance the night before, Alex immediately began showcasing a professional precision – while going crazy with energy at the same time. Her unrivaled stage presence and powerful music are only some of the reasons NotLö is set to quickly become one of the greatest success stories.

After a face-melting hour with influences from Hip-Hop, Boom-Bap, Dubstep, Trap, and everything in between, Alex thanked the crowd for their support.

So it was, with the same excitement that comes from finishing a delicious meal and getting ready for your favorite dessert, that NotLö brought up Electric Hawk’s very own Matheny to finish off the evening.

Matheny brings a different flavor to the table, with his production style featuring more traditional chords and song structure from genres like Trance and Future Bass. While he certainly has a lot more high-end love in his music than most experimental bass artists, Matheny never fails to deliver mercilessly thick bass. While playing a mix of original tunes and modern classics, Matheny delivered a standout performance of Dubstep and Drum & Bass to round out the night.

Arguably too soon, but like all good things, the concert had to come to an end.

The show eventually wound down into a delirium of affection pouring out within the room, like a graduation party after a long semester. This was an unforgettable night, both for the artists and attendees, and we look forward to more fantastic things to come from NotLö & Friends.

If you’re looking for a solid playlist to follow? Keep up with our weekly Spotify playlist, Fresh Hunts. Whether it’s new NotLö, all your other favorite artists, some old-school, or underground…we just want you to hear it.