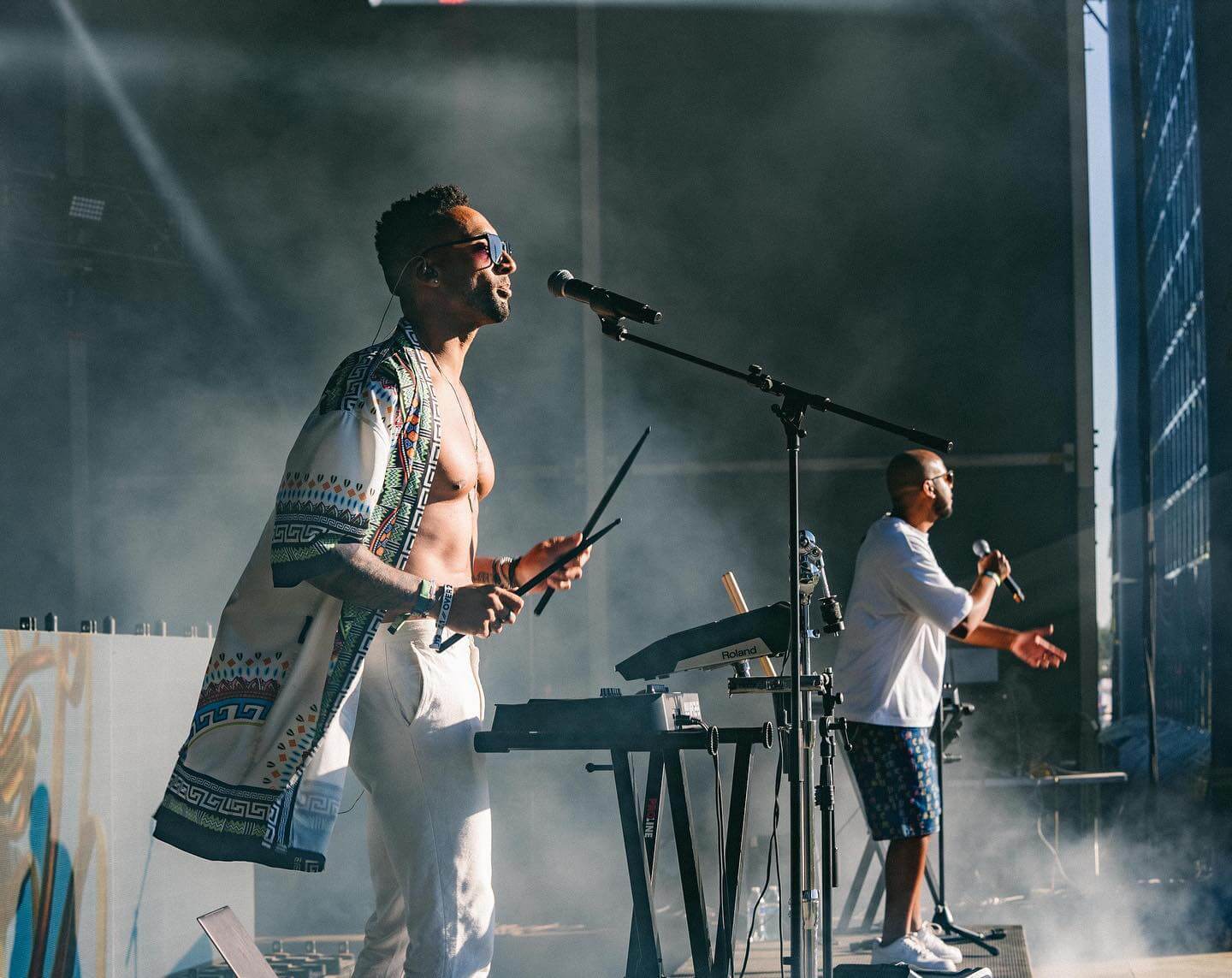 By Morganne DavisAugust 19, 2022No Comments

It’s here! Night Tales wows with a new, refreshing song titled “Patient.” After nearly a decade in the making, this stunning duo is finally stepping into its power. Whereas their sound is described as alternative electronic, the vibe of their music tends to fluctuate. The deep roots of R&B and hip hop are evident, as their songs pack a hefty amount of soul in the lyrics and storytelling. If you’re unfamiliar, now is an excellent time to listen up!

Once upon a time, Aaron Bannie and Kamaliza Salamba met through a booking agent while living in Australia. At that time, they were focused on their separate lanes in the industry; for example, Third Floor was Aaron’s electronic vision, and Kam played in various bands, including his R&B project. But, an instant connection was made upon meeting, and the rest is history!

Shortly after, they signed a deal as Night Tales with the German label, Majestic Casual, which resulted in one of their biggest hits, so far, “Move You.” Their number of American listeners quickly skyrocketed since it’s so easy to resonate with their music. Above all, it was an honor to sit down and chat with Night Tales in this Exclusive Interview while this next chapter of their book begins!

Morganne Davis, Electric Hawk: What genres or artists do you two draw inspiration from?

Aaron: We pull from the music we like and grew up with.

Kam: We’re definitely inspired by our peers who make similar music to us.

A:  It’s funny now. Some prominent artists like Drake, Beyonce, and even Megan Thee Stallion are crossing into our lane! That’s what Kam and I really want to do: pioneer the space for Black artists who write and perform their own music. We want to crossover and have the electronic movement slightly more accessible to people like us.

MD: So, is that the goal for Night Tales? To bridge the gap between the pop music world, or any other genre, with the electronic scene.

A: Yeah, and go as far as we can as artists! Once we get more visibility, we can hopefully start collaborating with more significant artists, whether someone from the pop world, and mesh both genres together.

MD: Congrats on getting signed to Ultra Records! How does it feel to release a full album this fall finally?!

K: It’s something we’re really proud of, and of course, it’s mixed in with some relief. Getting here, to this point, has been five years of strenuous work, so, super excited to get it out! The album is titled “Proof,” I think it can be applied to many different life circumstances. When you have proof of someone being there for you or prove to yourself that you can accomplish what you set your intention to. So it came with many meanings, and we thought it was appropriate to title it that.

A: Wow, I think Kam tells it better than I do! We need to record that and keep it!

MD: As Night Tales, what is the creative process when composing a song like “Patient?”

K: We both listen for the feeling because the instrumentals speak first. What is this song trying to say?

A: Yeah, that’s how Kam and I work. Sometimes I’ll write the music and send Kam the idea, and he’ll smash out the vocals or vice versa. Once we start writing the music, it’ll set the tone, and we ask each other, “how does that make you feel?” Once we agree on the direction of the feeling, we can write the story.

MD: I always love music that makes you feel something or strikes a chord with you. Do both of you sing?

A: Kam’s the lead! He’s the voice of Night Tales. Usually, I do the beats and backup vocals.

K: And if either of us starts the lyrics, we finish them together! We’re still very much involved in the writing process; when it comes to the recording time, I’ll take the main vocals.

“’Patient’ is about trying to find a common ground with people in your life and understanding them every step of the way while you come to a mutual understanding.”

MD: Are there plans to release more singles before the album, or will we have to wait patiently? (Haha, get it?)

A: Yup! We’ve got two more until then. “Patient,” and then a few weeks before the album in September, the last single is “Phoenix.” That one is high-energy and angsty—a very, very different perspective from “Patient,” which is softer and more understanding. “Phoenix” is more like you’ve reached the lowest point, and now it’s the rebirth!

K: One of the main lyrics is “now come out from the dark and in through the fire,” which is like beckoning you to step through moments of discomfort. To get to a better place.

MD: Last but not least, let’s talk about touring! What stops are you most excited about coming up on the Proof tour?

A: We’re most excited about all the places we haven’t been to yet, like Portland or Canada! Also, since there are eleven songs on the album, and we have ten tour stops (plus a VIP show in LA); as part of the album tour, we’re going to find an iconic landmark of each city and then do a performance piece of each song off the album there!

As can be seen, there are lots of projects and music to look forward to from Night Tales! The groovy and light aura of their newest single, “Patient,” is only a taste of what’s to come! Until then, here’s where to catch Night Tales on the Proof tour:

And if you’re looking for new music, keep up with our weekly Spotify Playlist, Fresh Hunts, or follow us on Twitch. Whether it’s the newest drops from Night Tales, all your favorite artists, some old school, or underground—we just want you to hear it.