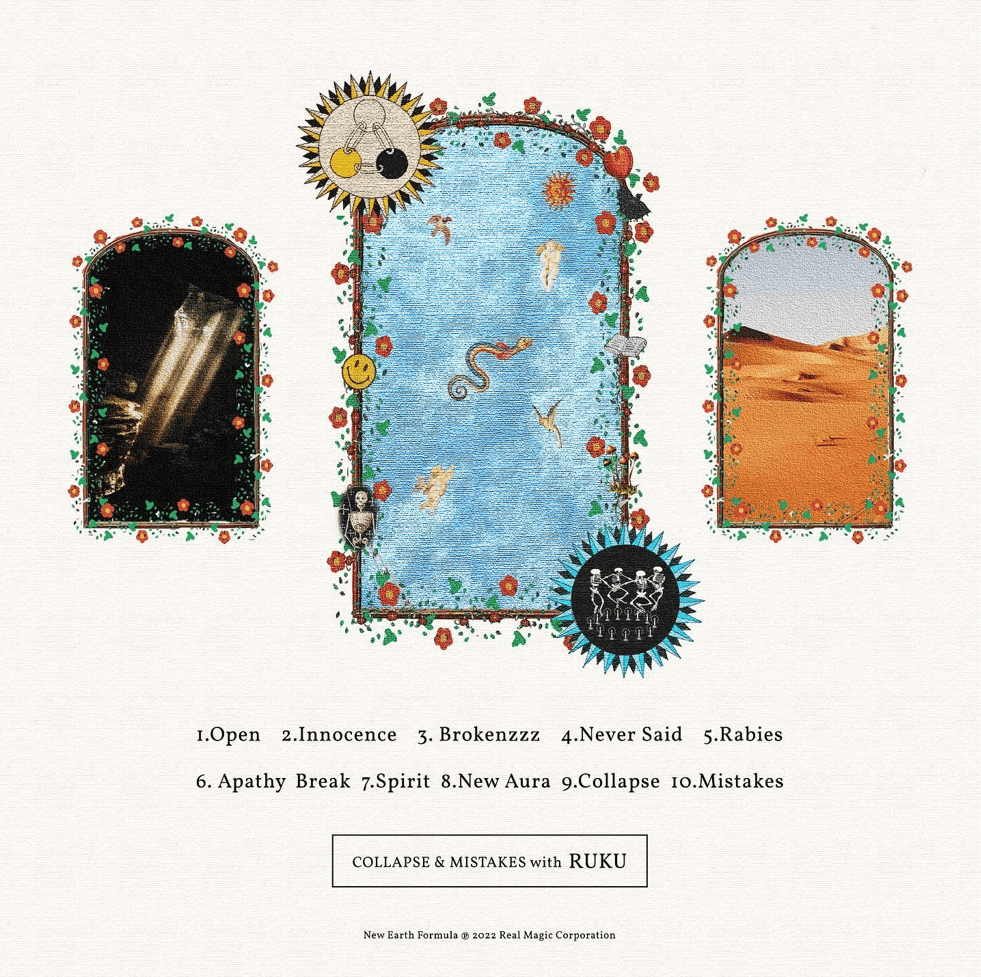 While streaming New Earth Formula – the latest album from potions – the word that comes to mind is intentionality. New Earth Formula encompasses the skillful artistry of the multi-instrumentalist and producer. The first full-length project from potions since 2018 spans the genre gamut from melodic songwriting to experimental bass to deep dubstep and downtempo.

Without feeling forced, the album tells us a story. You can hear the peaks and valleys, exposition and resolution, as you listen. Again, the intention seeps through the music.

“New Earth Formula is an album about rebirth – both personally and collectively. On a personal level it explores themes of love, addiction, grief and the cyclical nature of those experiences. On a collective level it is a lament for the destruction of the Earth and a call for embracing new ways of living in order to not lose our planet’s habitability.”

The cover art of New Earth Formula was created by potions himself, with the help of the multifaceted Alec Donkin – a cofounder of Kompass Music Group, an incredible graphic designer, and the bassist for Argonaut & Wasp.

“The artwork was made predominantly by me with some assistance from Alec Donkin, one of my managers and creative partners. I would essentially put everything together and he would run through and fine tune things like the coloring and textures. He also made all of the animations, which will be a part of my visual show during performances. It draws a lot from artwork from the Middle Ages, which serves as a metaphor for the transitional era we are currently going through in regard to technology and environmental collapse.”

While we strongly suggest listening to the album in its entirety, each track stands strong in its individuality.

Appropriately titled “Open” walks with us into the introduction of the album, where melodic beauty melts effortlessly into the strangeness of dub. “Innocence” follows. The first single released from the project, it features beautiful vocal chops and sporadic piano triads. The bassline develops just in time for “Brokenzzz.” While breaks and backspins are throughout, the song maintains its roots in deep dubstep.

“Never Said” is a standout track for us. The beauty of the first half of the song tricks you. While floating on the edges of genre identification, the track switches into an unexpected dance of drums. The energy of “Never Said” is expertly interrupted by the slow magic of “Rabies” which is the first track to centrally feature the voice of potions.

“This album is one of the first releases I have done to feature my own vocals in a more substantial way. The process around learning how to capture my voice best has been an extremely rewarding part of the process. I love writing lyrics and suspect that will play an increasing role in my music.”

Downtempo continues with “Apathy Break” which feels like classic potions. Next, we take the journey that is “Spirit” into “New Aura” – our personal favorite two-track run of the project.

We all have songs that bring us back to a specific moment in time; it’s a visceral memory, one that permeates not only mind, but body. For me, “Spirit” is one of those tracks. At this year’s Electric Forest, I enjoyed a midday potions set at Tripolee with a large group of Hawks. This was one of my favorite sets of the weekend. When listening to “Spirit,” I feel that immediate rush of carefree joy return.

“New Aura,” the second single off of New Earth Formula, showcases the heavier side of potions.

New Earth Formula comes to a close with back-to-back collaborations with ruku – “Collapse” and “Mistakes.” The final tracks are a perfect bookend to the album. The bewitching voice of ruku is one you can never tire of. In addition to her solo work, you can hear ruku on tracks with Wreckno, tiedy ky, and G-Space.

In addition to his stand-alone project, potions is a founding member of Lab Group, along with CharlestheFirst. Electric Hawk is so eager to see what comes next from both potions and Lab Group.

All in all – New Earth Formula is a masterpiece. Take 32 minutes and give yourself the gift of listening to this album with intention, just as it was created.

If you’re looking for new music, keep up with our weekly Spotify Playlist, Fresh Hunts. Whether it’s the newest tracks from Potions, something new from your favorite artists, some old school, or underground—we just want you to hear it.