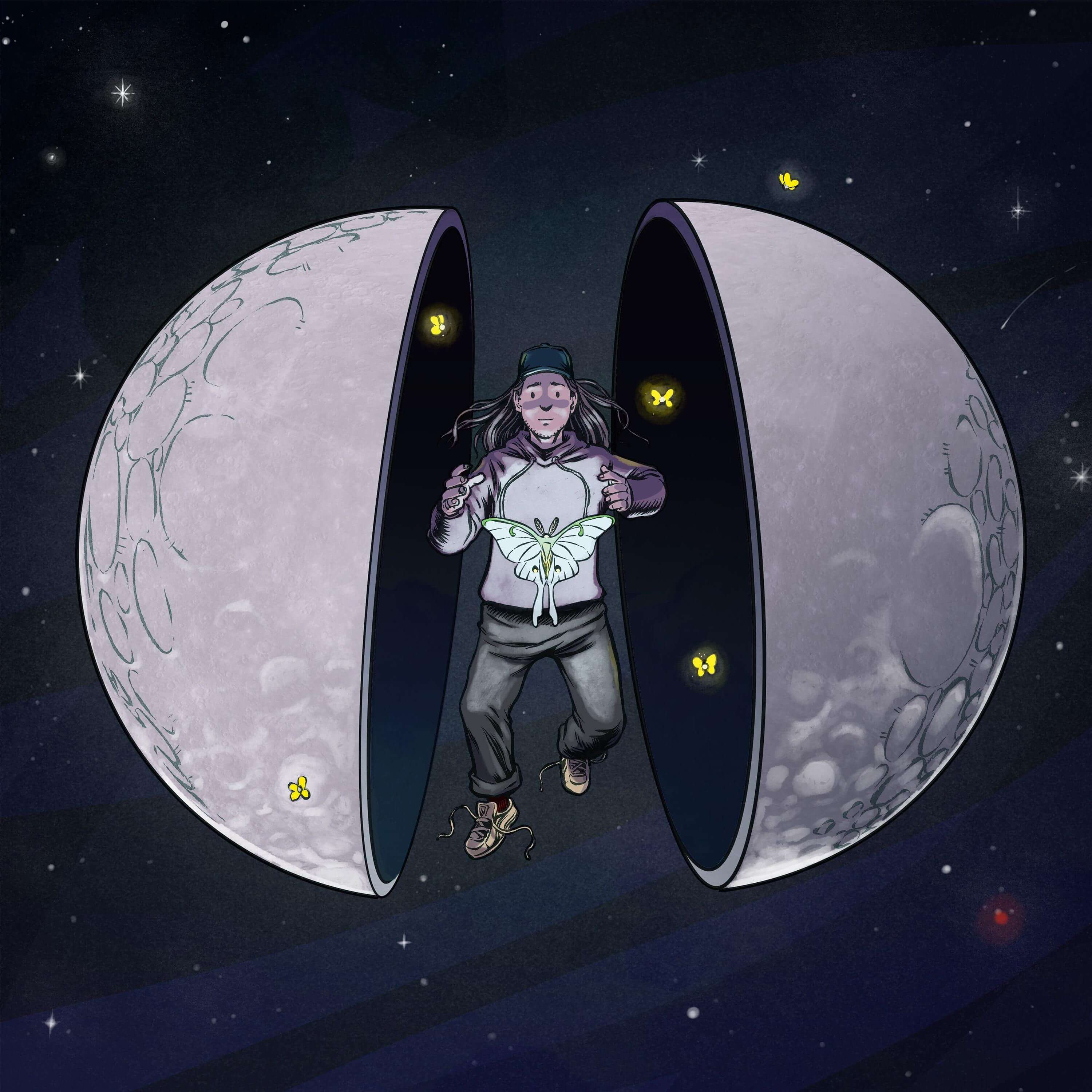 tiedye ky colors outside the lines with his debut album, Baby Blue and The Super Moon. I got the chance to get an early listen, and talk with Kyle (tiedye ky) about the album, his creative process, his favorite Mac album, and other things in this exclusive interview.

Hayden McGuigan, Electric Hawk: So firstly, could you tell the readers a little about yourself? In case they’re new to who you are.

tiedye ky: Yeah! So, my name is Kyle. I’m from South Jersey, but I currently live in Philadelphia. Philly is where I, like, got into the music scene, it’s where I went to my first show. So it’s kind of the place that inspired me to start creating art. I have two very supportive parents. Since the pandemic hit, I’ve started making clothes in Philly with a friend of mine. And I’ve been writing music for like 6-7 years.

HM: Tell me more about Philly!

tk: Dude, I love Philadelphia so much, I might not ever leave man [Laughs]. It’s just home. I grew up in the suburbs, so I’m close to my family living here. I love the scene here, I find it to be pretty authentic too. It’s like there’s this unspoken code that being a Philadelphian is really important around here.

HM: Are you an Eagles fan?

tk: I am an Eagles fan! Like, by default ya know?! I don’t really care about sports, like, at all. But rooting for the Philly teams just feels right whether you’re interested or not. That camaraderie makes you feel united with your city and the people around you, and that’s awesome. I think that people value that feeling too, even in our community. That feeling of being unified is something we all experience when we go to shows. We feel welcome, and accepted by like-minded people. So I love that about Philly.

tiedye ky is a ramen-loving, skateboard fanatic with a unique and lovable charm.

But it’s worth noting how humble he is. What Kyle forgot to mention, was that he is an absolute musical wizard. A multi-talented musician that has performed at festivals like Wakaan Festival, Okeechobee, Camp Bisco, and more. His music has managed to amass over 3.5 million streams across Spotify, and Soundcloud. And once you hear this new album, you’ll understand why.

The title of this article pays homage to a two-sided EP tiedye ky released between 2017-18. The EP, Color Palettes, split his different styles into two separate, more digestible collections of work. Side A, named after colors, took a more melodic approach. Meanwhile, Side B took the heavy route and was modeled after the elements. But since then, Kyle has come to the conclusion to be his most unapologetic self. He wants people to see him, not only as the face-melting, mind-bending bass producer that he’s proven himself to be. But as an artist, free from the shackles of “genres.” And capable of anything he sets his mind to.

I was almost at a point after Color Palletes where I thought I had to make this decision like…if I wanted to be accepted by this community, then I have to make this certain type of music.

Feeling alienated, Kyle had an idea.

His first thought was to start a different project to express his multi-faceted art style. In fact, Baby Blue and The Super Moon was almost a band. Kyle was set to be “Baby Blue” and his bandmates, “The Super Moon(s).” Side note y’all– I think it’s important for us to support artists in their experimentation. And to be honest, some people can be harsh. I mean case in point: Getter. To this day, I still believe Visceral is some of his best work. But, some people were assholes, and their actions caused him mental suffering. Your privilege to believe that someone owes you a certain type of self-expression is toxic. And thankfully, after some thinking, Kyle realized that compromise– isn’t what art is about.

HM: So you skate. Who’s your favorite skater? What kind of board do you ride?

tk: I ride a Baker skateboard, and I think my favorite skater of all time is Andrew Reynolds. Just because I grew up watching him skate, and I would watch Baker 3, and people called him “The Boss” ya know? [Laughs] He just has such sick style, and he’s kind of an OG. But I love the whole Supreme crew, like I love all the films that William Strobeck makes.

HM: Do you skate regular, or goofy?

HM: Nice. So picture this. It’s a sunny day, you’re skating through Philly. Which track from Baby Blue and The Super Moon is playing in your headphones?

tk: It’s probably gotta be “Livin’ Right Now.” A little backstory on the song, I wrote that one the day of Pipus’ funeral. He had passed. I went to his funeral, and it was just a super sad day. After the funeral, I got home around 2 pm and wrote that song, front to back, that day. It just like, spilled out.

tk: Yeah. Even though he’s not featured on that one, it’s kinda meant for him.

HM: That track starts with a seemingly casual conversation and a freestyle from Pipus. Care to tell me about that day?

tk: Absolutely! He was such a dear friend, and I’ve found healing through trying to carry out his legacy. That first recording was not the same day as when we recorded the rest of the song. We were like chillin’ with some friends. We started recording when a couple of our friends were in the room with us. Like Pipus’ best friend, Kendra. You can hear Lex’s voice, or Zia. You can hear Grady’s voice, or G-Space, too.

We were all just kickin’ it, and I had two microphones set up in my room. One, set up on my amp. And the other on Pipus’ voice. And he used to love to just like, freestyle, ya know what I mean? I hope people are able to digest the way he kind of mumbles because it wasn’t planned. That was just him freestyling. Like we would just set up the mic and he would freestyle for hours.

Kyle described the creative process for Baby Blue and The Super Moon as a long one. “Over Again,” an alternative-inspired ballad with fluttering guitar riffs, and beautiful vocals, was written over two and a half years ago. This album is the culmination of various pieces Kyle has made throughout the past few years.

The tracklist for BBaTSM consists of 12 tracks that glide across genres with grace. Songs like “Hold On” are spiced with R&B vibes while remaining mainly an experimental bass track. “Don’t Do Me Like This” grinds warping and sawing synths for a trap anthem. And the vibes are at an all-time high during tracks like “Lunar Girl,” featuring Ruku.

It kind of became this intimate duet between her and I that I think we’re both super proud of. She is the Lunar Girl.

HM: A lot of music has been dropped this year. What’s your favorite album so far?

tk: It’s gotta be Man Alive by King Krule. No questions asked. That’s like my favorite artist, I draw a lot of influence from him.

HM: What kind of music did you listen to growing up?

tk: Definitely a lot of rock music. Some of the first CDs I ever had were like Led Zeppelin, Black Sabbath, etc.

HM: What’s one song you’ve had on repeat lately?

tk: [Laughs] Wow, that is a great question, with a funny answer. It’s actually a Machine Gun Kelly song. He just came out with, like, a Pop/Punk Record and its executive produced by Travis Barker. And the song is called “Concert for Aliens.” It literally sounds like a Blink 182 track but, like, produced in 2020. And MGK is singing on it, not rapping, and I just fucking love it so much.

tk: The first album I got into when I was listening to him was K.I.D.S. like in high school. But I think my favorite album by him is Swimming. Seeing how far he had grown and matured thus far with that record compared to something like K.I.D.S. was breathtaking to me.

Being authentic is important to Kyle. This album is a piece of him that he is so excited to share with you guys. He picked the tracks that he felt represented his most authentic self. And at midnight tonight, it will be shared with the world. From the hour I had with him, I can tell that Kyle is passionate about his art. And that passion deserves all of our attention.

Since the album isn’t out yet, stream Basspunk Loverboy by tiedye ky below, and support your favorite creatives:

And if you’re looking for a solid playlist to follow, keep up with our weekly Spotify playlist, Fresh Hunts. Whether it’s new tiedye ky, all your other favorite artists, some old-school, or underground…we just want you to hear it.