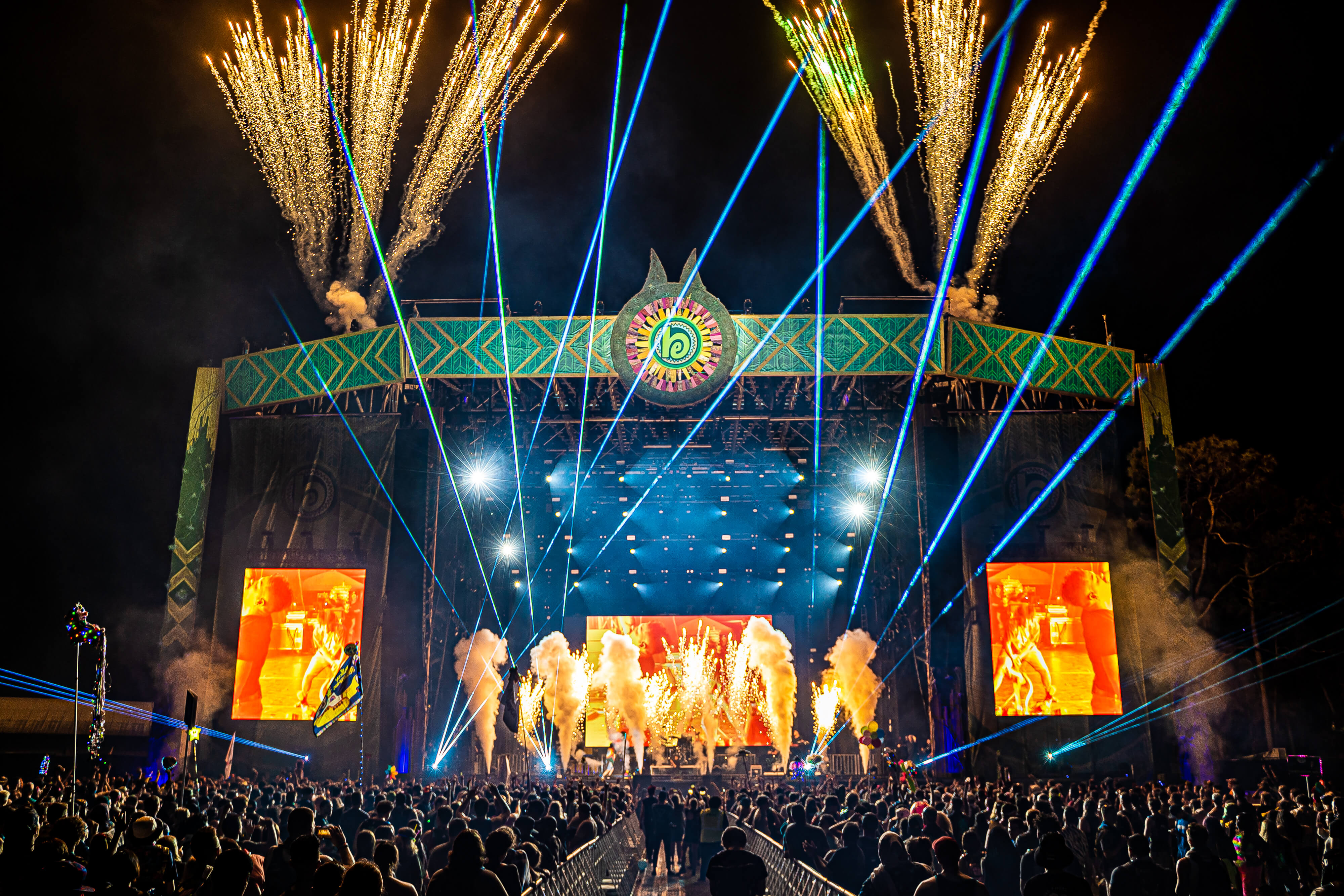 The Rise And Return Of Okeechobee Music Festival 2020 [Event Review]

After a hiatus in 2019, Okeechobee Music Festival has come back to life. Now under Insomniac operation, Okeechobee returned to Sunshine Grove, Florida on March 5-8 and came back bigger and better than ever. The weekend consisted of incredible acts, tons of activities, and a revived community. Okeechobee was in full swing with a slew of incredible acts, art installations and more that blew us away and have us already dreaming about next year.

Aquachobee is the unsung hero of Okeechobee Music Festival. Located inside the campgrounds, Aquachobee allows attendees to roll up with a cooler filled with drinks and food and vibe on the beach all day long before the night begins. The Aquachobee stage was constantly packed with acts such as Ivy Lab, Thriftworks, Y2K, Huxley Anne and more. The beach offers plenty of space for your favorite flow art, games like corn hole, volley ball and more as well. It’s the perfect dardy location.

In addition to his slotted set time, LSDream treated festival-goers with an extra special ambient meditation sound bath set at Yogachobee on Saturday. Nearly 300 people showed up for the sound bath and soaked up the binaural beats and astral sounds LSDream had for us. It was truly a moving set, and one of the most memorable parts of the weekend.

Experience the sound bath for yourself here. (Best with headphones.)

The tea lounge at Okeechobee offered a whimsical escape amidst the normal chaos of the festival. There were plenty of things to run into and discover within the tea lounge. From hidden passageways that led to winding halls, to customized poetry and gambling rooms, the entertainment was endless here.

One night there was even a drag show that started a 3 a.m. featuring some incredible queens and even better entertainment. It’s things like this that make festivals so special and unique, and keep us coming back for more.

Jungle 51 and Other Late Night Options

One of our favorite things about Okeechobee was the options the festival provided for fans after shows ended for the night in the Grove. The Incendia Stage was literally on fire all night between the actual stage illuminated with flames and the bass thumping on some Funktions. The stage provided bassheads with an option to get weird well into the late night. Not to mention, it also hosted a secret performance which was a rare Big Gigantic DJ set.

Jungle 51 was spectacular and everything you could want in a late-night option for a festival. Nestled away in the woods, this disco party truly came to life from the few hours before sunrise. Legend techno artists like Derrick May, Lil Louis, Maya Jane Coles & many more supplied the entrancing beats while lasers and disco balls transported you to the 80s. We could have lost ourselves in the jungle for hours upon hours here.

As if all of this wasn’t enough, festival-goers could also find themselves at those classic late-night RV sets hosted by local promoters. Some were lucky enough to stumble upon a sunrise set by lineup artist Yheti himself!

First and foremost, Electric Hawk was well represented in this year’s lineup. Featuring sets from Super Future, Wreckno and Floret Loret, you may have seen the Hawks flying around from time to time over the weekend. While Incendia was already hot itself, Floret Loret made it even hotter with his incredible set. Super Future b2b Wreckno rocked us to our core and was the perfect weekend closeout set.

Caspa set the tone for the weekend by delivering one of our favorite sets to close out the Bassrush Party. Thursday night was an absolute party at Aquachobee as Insomniac’s signature Bassrush label curated a throwdown on the beach. Huxley Anne, Yheti, and Ivy Lab all brought their own signature taste of bass to the function. Closing down this night of mayhem, it was only appropriate that such a pioneer to the bass genre took center stage. For the next hour and half Caspa took us all to school. He showcased his signature dubstep sounds that helped form what bass music has become today.

Saturday night at the Here stage was quite the psychedelic experience. Mersiv into LSDream into G Jones into the legendary Tipper had our minds discombobulated and searching for more complex answers than just what we were going to cure those late-night munchies with. Through the madness, LSDream delivered an absolutely beautiful set that executed a blend of bass and psychedelia to perfection. Mixing in signature tunes from the 60s like Jimi Hendrix’s ‘Purple Haze’ or The Beatles’ ‘Lucy in the Sky’ with mesmerizing visuals set the tone throughout.

Words cannot describe the magic that was the Glass Animals set on Sunday night. Sunday’s are easily the best day of festivals because everyone is chilled out from partying all weekend and the vibes are in just the right place. After a year hiatus, Glass Animals finally returned to touring in 2020, and we Okeechobeeings were blessed to have a set by them.

They kicked off their set with their new track “Tokyo” and went on to play several of their new tracks. “Gooey” felt like it went on for 15 minutes but I can’t tell you for sure that not a soul was complaining. The vibes of this crowd were some of the best I’ve ever experienced at a festival. It was full of love and fun and plenty of dancing.

Improvements and Changes Made

One of the biggest changes in the grounds this year came as a complete makeover of the Here Stage. Once situated adjacent to the Be Stage and striking many similarities, the stage became an oasis for electronic beats and a place to escape the heat. The production value certainly received a major upgrade as the tent-like structure was lined with lights and lasers throughout. Once darkness hit, this structure felt like you were encapsulated and entering into a whole new venue. Overall, we really loved how unique the vibes they created at this stage were.

When you go to a festival, something you look forward to is hearing your favorite tracks played out on an incredible sound system. With Here stage redesigned and moved and Be and Now positioned just a little differently, sound bleed was pretty much nonexistent the whole weekend.

Each stage was thumping and there was no place in the crowd that it didn’t sound amazing. With that being said, always use earplugs! Great and loud sound systems do equal hearing damage and I don’t know about you, but I want to be being grooving in the Grove until I’m 80.

If a festival offers camping, it’s an unspoken rule that you should camp. Okeechobee Music Festival including camping in this year’s ticket, making it an easy option for festival-goers. Getting into the campground was seamless and workers were accomodating to big groups wanting to camp next to each other.

Campgrounds included water stations, general stores, and shower stations, along with Porto potties spread throughout giving campers easy access to basic needs. Also located inside the campgrounds were plenty of food options for all diets and cravings!

The vegan food options were some of the best we have ever seen at a festival. So many people in our crew are vegan and sometimes frustrated by the lack of options at some festivals. Not Okeechobee! The wide variety of choices for vegans was phenomenal and such an encouraging thing to see. Notable highlights for us included a tempeh BLT, a beet cheesesteak, a VEGAN slice of pizza, waffles and of course the always reliable Island Noodles.

So far, we have no word on Okeechobee Music Festival 2021, but with the success of this year’s event, we’re hoping to be back in Sunshine Grove this time again next year. Until next time Okeechobeeings!