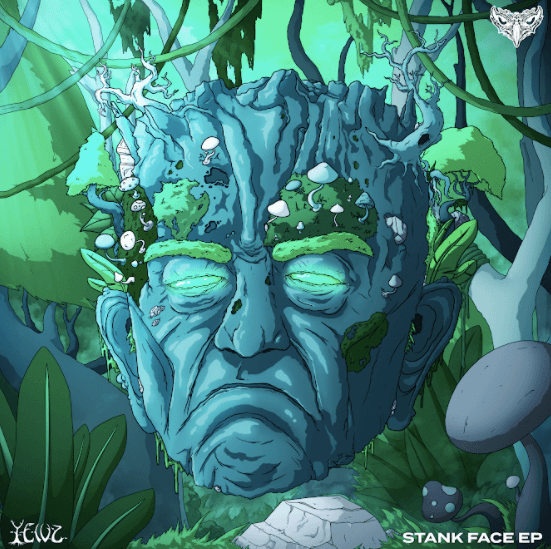 Is it me, or is it getting stanky up in here? Actually, it’s just the Yewz Stank Face EP. The Mesa, Arizona based artist has us all tensing up our face muscles in his three-track debut EP release with Electric Hawk. Loaded with crunchy basses, crispy basslines, and creamy vocals, Yewz supplies listeners with a feeling of delight in each song.

You can’t have the Stank Face EP without the title song “Stank Face”.

Usually if something stanks, you’re in a mood of disgust. But with this song, the only thing that’s stanky are those basslines. It’s a wobbly and vibrant start to “Stank Face” which only gets juicier when the drop hits. Yewz then hits us with four unique sections to his first drop, each as wonky as the next one. But the shakin’, poppin’, and workin’ don’t stop after drop one. The second half is just as funky with another fierce foursome of bass goodness.

“One, Two” and “Creator” embrace the bass, however, they also include some repulsive raps from Lowkea. “One, Two” starts steady, but once it builds up to the peak, Lowkea takes control. The tag team of Yewz and Lowkea wipe out your speaker system with a knocker of a drop. Bustling basslines a lyrical flow take control and make me do that little slap thing with my hand.

“Creator” brings big energy to the end of the EP. This song smacks you right upside the head with intense sounds and raps. Both Yewz and Lowkea get to show off in different sections of the song. Lowkea’s rhymes just fuse right into the first drop, adding some flair to an already massive song. And Yewz shows us why he has a big brain for bass music delivering some funky bass straight to the face.

Our little Sapling has grown into an enormous Sequoia tree.

Yewz has provided us with bop after bop in 2020. Chase handed us vibes in songs like “Can’t let you go” and “Color.” He can also get a lil’ nasty in tunes like “Money” and “Oop.” Yewz is all about sharing his sound and helping those grow around him. We here at Electric Hawk watched him expand and run riot on the scene. We highlighted Yewz last year to listeners, and one year later he’s impressing those same listeners with his debut EP.

NOW SHOW ME YOUR STANK FACE!

Listen to the Stank Face EP below, OUT NOW on Electric Hawk:

And if you’re looking for a solid playlist to follow, keep up with our weekly Spotify playlist, Fresh Hunts. Whether it’s new Yewz, all your other favorite artists, some old-school, or underground…we just want you to hear it.