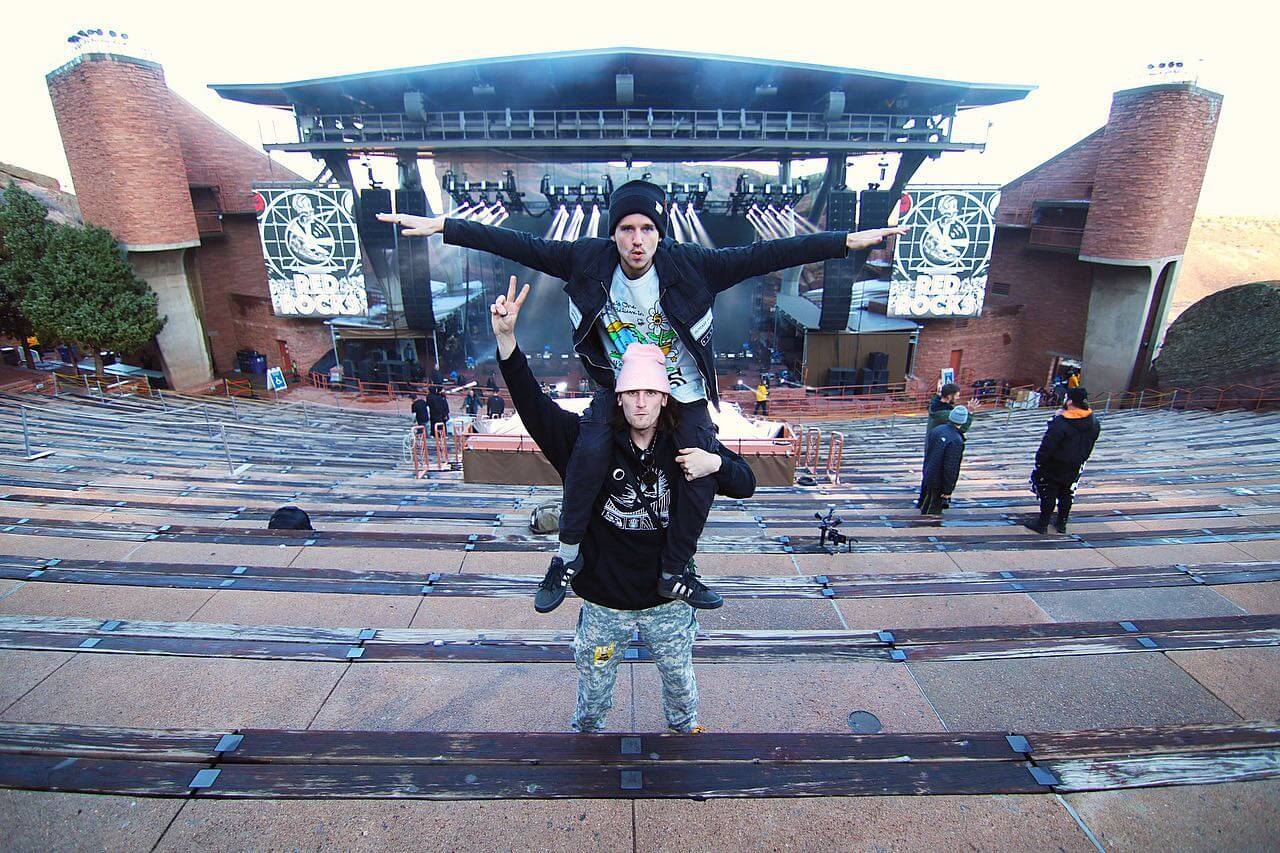 By Morganne DavisDecember 15, 2022No Comments

The charismatic duo EAZYBAKED presents the Intertwined (Remixes), a rework of their acclaimed album by some of their best, most talented friends. Eric and Andrew have been pushing the boundaries of sound since they were kids, and now they’ve become a household name in the bass scene nationwide. Their chemistry and love for each other are infectious, showing clearly through their music. Since making their debut alongside fellow Lost Dogz like Player Dave and Abelation, their sophomore album, Intertwined, is a testament to their evolving but unmistakable signature style. Buckle up; it’s about to get weird.

EAZYBAKED’s Intertwined album is already a gem, but each of these remixes makes it a bit more special.

Firstly, LA-based producer FLY is steadily making waves, and he slays his remix of the boys’ first track. While keeping the energetic spirit of “Innertwine,“ FLY adds a personal twist of wiggly accents against the familiar knocks. His experimental style will undoubtedly have the listener intrigued from start to finish!

Following is “Sapped,“ the Of The Trees and EAZYBAKED collab we didn’t know we needed, reworked by Vide. Not only is his bass-driven technique something to be admired, but Vide also continues to take his solo project to the next level. The fellow Lost Dog spices it up with a slightly faster tempo to accompany the exuberant rumble, making it rather impossible not to sway along. In short, the bass only gets grittier with the second drop; sheesh.

Next, a thoughtful remake of “Letting Go” will pull your heartstrings with each echoing lyric. The multifaceted tiedye ky is excellent at illustrating emotion but still delivering a hard-hitting rhythm. For example, the new vocals enunciate the choppy bassline; it’s soothing but powerful. Not to mention the layering of rambunctious accents that take you by surprise later in the track!

After that, the legend kLL sMTH takes on EAZYBAKED’s popular single “Simulated.“ Hailing from Denver, his artistry spans many genres like a true jack of all trades. You’re bound to be impressed whether it’s a kLL sMTH or cHLL sMTH set. Given that, his modified version of “Simulated” is a stimulating heater. The lively introduction immediately grabbed my attention as the distinct snarl of bass revs before the first drop. Get ready because kLL sMTH lets loose on this one!

Also featuring on the Intertwined (Remixes) album is Digital Ethos. Both his love for hip-hop and desire to elevate electronic music is apparent in his rendition of “Isolation.“ The fast breakbeats are a surefire way to have the dancefloor bouncing until the cadence comes to a halt and slams the hefty bass out of nowhere. How typical of Digital Ethos to keep us on our toes!

Even though the artists brought their unique flair to each Intertwined track, the EAZYBAKED essence remained the same.

Of course, the homie Black Carl! joined in on the fun of redoing a personal fav that features VCTRE. Breaking out of Alabama, this lovable human is undeniably a force to be reckoned with. Likewise, his versatility knows no bounds, and his “The East” revamp is proof. Rumor has it that this was his first attempt at house music; personally, it did not disappoint. Without delay, Black Carl!’s catchy four-on-the-floor track will have you dancing along.

Milano. Milano. Milanooo. As a long-time friend of EAZYBAKED and Lost Dog comrade, Milano exceeds expectations with his revision of “Capsule.“ His eccentric trademark sound, coupled with a rebounding bassline, is a compelling start. Furthermore, the mesmerizing interlude is a noteworthy bonus that makes Milano’s stellar remix refreshing.

In addition, G-Space and Computa get wild on their collective restyling of “S.O.T.E.“ These two have a vast knowledge of an abundance of genres, resulting in a perfect match for this rework. Together they managed to transform the original into a drum and bass edit. This tune has such a groovy vibe that it will immerse you until the end.

Then there’s “Goon Mentality,” which is remade by sfam! The infamous duo from New Orleans have been producing together for years and years; their growing recognition in the music scene is incredibly well deserved. “Goon Mentality” starts slow and steady, only to erupt into the rowdiest breakbeats. High knees engage!

Last but not least is Molokai and his remodeling of the final song, “Distant Voices.“ Each piece he touches has a confident swagger that cannot be duplicated. The chipper beat and eclectic arrangement of notes are a pleasing treat; the perfect track to conclude the album!

The EAZYBAKED bros assembled an excellent talent showcase with their Intertwined (Remixes) album. All in all, every producer brought their A-game and delivered a masterpiece. Don’t sleep; these are the artists to keep an eye on!