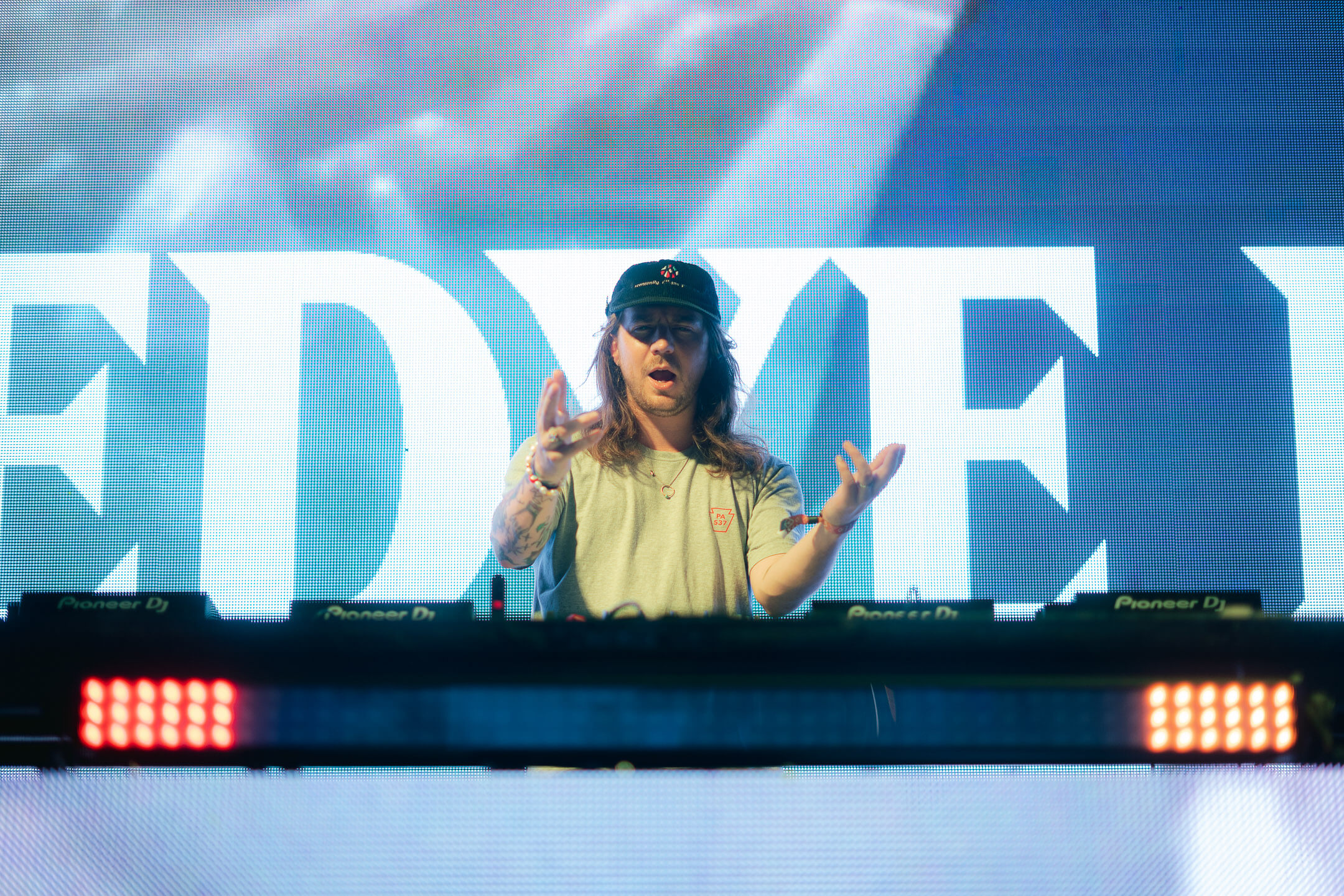 By Morganne DavisJuly 8, 2022No Comments

Yonderville ’22 was a success, and this festival continues to be one of the most incredible and intimate experiences! Not only does Yonderville continue to support the underground, but it’s also an excellent start for many aspiring artists. While there, we had the opportunity to sit down with the inspiring tiedye ky for an interview. After his main stage set on Saturday night aligned perfectly with the sunset, we chatted about Electric Forest, his busy tour life, and the making of Hound.

Let’s dive into the interview and the mind of tiedye ky!

Morganne Davis, Electric Hawk: First, have you played at Yonderville before?

tiedye ky: I have! This is my third or fourth Yonderville. I love this festival, and I love seeing them grow! This year was the fattest year they’ve had so far. I’m happy to be a part of it!

MD: This is my first time here! I like the smaller festival vibes.

tiedye ky: It’s a small festival, but the energy, homies, and sound are top-notch. I love this festival!

MD: So, you made an appearance at Electric Forest this year! Were you there for the entire weekend?

tiedye ky: I was there the whole time! That was my first Forest.

tiedye ky: It felt amazing. I left it all in the Forest, you know; I spent a lot of energy hanging out with my friends and staying out late! I was with the Lab Group folks, and we had an Airbnb, so we stayed together. Those are some of my closest friends; it was really nice. My whole Forest experience was excellent.

MD: Good, I’m glad! I’m from Michigan, so that’s the hometown festival I love going to!

MD: That Lab Group set on Sunday night of Forest was SO special, so good. It felt like a proper tribute to Charles. How did it feel to perform alongside Potions, Supertask, and Ruku?

tiedye ky: Yeah! Those are some of my closest friends at this point in my life. I don’t love anyone as hard as Lab Group, Ruku, and Player Dave as well. Collaborating with them is easy. And singing for Charles, singing Charles’ song at Forest… That’s my boy, you know. I traveled with him [Charles] for a couple of years, and he introduced me to Supertask and Potions, so our bond is very tight.

MD: You can tell there’s a lot of love there!

tiedye ky: My mom says to me often that everything we’ve, you know, worked towards since he left us, we would give it all back to have him here with us.

MD: Beautiful; thank you for sharing that.

MD: Switching gears, your sophomore album, Hound, was released in May. I’ve had it on repeat for weeks! How long was it in the works until you were satisfied?

tiedye ky: Some of the songs on Hound preceded Baby Blue and the Super Moon. The collab with Just Neeks is three years old, but I dug it out! Then other songs, like “Hound 4 You,” with Potions are new! I would also say that the collab with Ruku, “I Fall In Love,” was created for a long time; I was playing it in my DJ sets for at least a year before it came out. Many songs on Hound were old but came to life when it was time to release independently.

MD: Do you have a favorite song off the album?

tiedye ky: “Everything Is Ok!” is my favorite song. It was written from a place of vulnerability, and it just fell together easily.

MD: That’s a good one! It feels like a nice hug.

tiedye ky: Yeah! Like a nice hug. Making that song was easy.

MD: As you mentioned, there are many collaborations on the album. For example, Just Neeks, Wreckno, and G Space. What was it like working with them?

tiedye ky: I only like to collab with my homies. I think Wreckno was my favorite artist I got to work with on Hound because he paved his road and succeeded in such a big way; I’m so proud of him! G Space was the one who got Brandon on the track. Since then, we’ve become closer and closer, I’ve gotten to spend more time with him, and I love him soo f*cking much! He and his team show me love, and I offer the same love right back. I love everybody I collaborated with so much.

If you haven’t indulged in tiedye ky’s Hound album, here’s your chance!

MD: You’ve been a busy guy lately! Earlier this week, you played a live show in DC with 5AM Trio. Can you tell us about that?

tiedye ky: It was sick! It was my headlining show; they even had the Hound artwork as the flyer. And 5AM Trio, they’re all Philly boys! That’s where I’m from and where we all live. We took that opportunity to be able to rehearse and practice together, and we sounded really good! It was a small intimate crowd at Pearl Street Warehouse in DC, so dope!

MD: Is Sound Haven your next festival stop after Yonder?

tiedye ky: It is! Next Thursday, I have a headline show at Cervantes, which we’re hoping to sell out! I curated the lineup and hired sh1elds to do visuals for the whole night. Then on the 9th [of July] is Esseks’ art show in New York. That’s one of my oldest and best friends. Sam has believed in me for a very long time. I’m thrilled to bring it home with Esseks this weekend; it will be very special!

Of course, I had to question tiedye ky about his experience during the Lab Group retreat!

MD: I know everyone, like me, is DYING to hear all of the music the 5 of you made on the retreat!!

tiedye ky: Yeah, I played several of the songs in my set tonight! The first was a collab with Potions called “Microscopes Online,” and the second was called “Park Bench,” which has a lot of us on it. Myself, Supertask, Potions, Player Dave, and Ruku have all been friends for a very long time. It was such an effortless vibe at the retreat. We made over 90 minutes of music together! It was very fluid, and we’re all happy with the trip. The creative process out in Oregon was fruitful!

MD: To sum up, I have a few questions about you! What other hobbies do you have besides producing?

tiedye ky: I like skateboarding. I like exercising. I’ve just been on the road a lot, but I like going to the gym and keeping my body healthy when I’m home. I also love drinking beer. Haha, there are a lot of breweries in Philadelphia, so it’s a give-and-take situation there!

MD: How many instruments do you play?

tiedye ky: I’m a jack of all trades but master of none. I’ve taken piano, drum, guitar, and vocal lessons. I even played the trumpet in 6th grade! So, I’d say maybe six or seven instruments.

MD: Would you rather listen to one song for the rest of your life or never be allowed to listen to the same song twice?

tiedye ky: Definitely one song for the rest of my life! I think it would be “Sense” by King Gizzard and the Lizard Wizard.

Shout out to MP3 Mag and tiedye ky for the fantastic opportunity to do this interview at Yonderville! Above all, we love watching such a humble artist thrive, and we can’t wait to see what the future holds for the tiedye ky project!

Looking for new music? Keep up with our weekly Spotify Playlist, Fresh Hunts. Updated every Friday with all the latest releases. Whether it’s the newest drops from tiedye ky, as well as all your favorite artists, some old-school, or underground – we just want you to hear it.