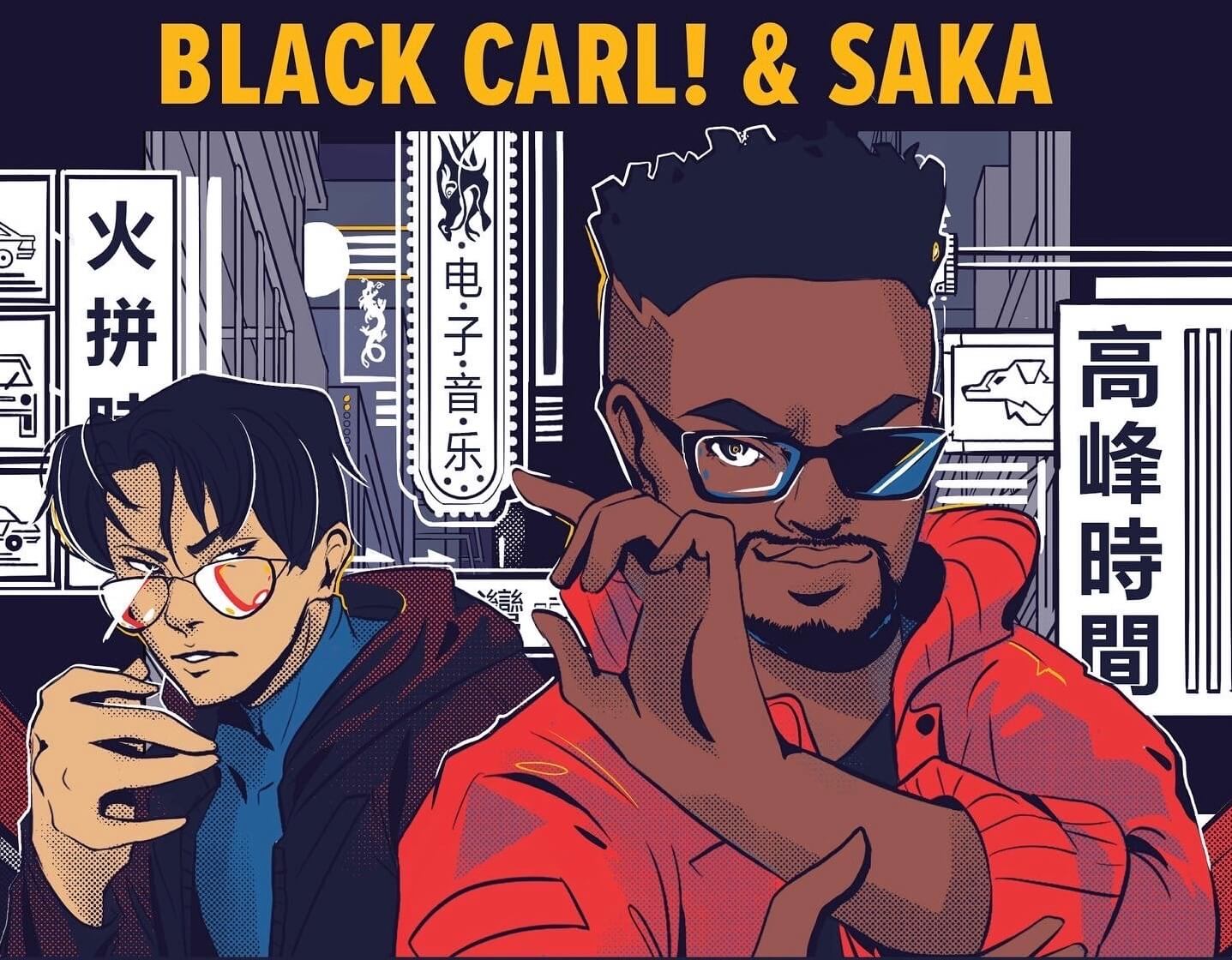 Lights, camera, action! All eyes (and ears) are on Black Carl! and Saka as they finally release Rush Hour, their debut EP. This long-awaited project has four beautiful tracks that combine their signature styles; Saka’s ability to paint vivid pictures and Black Carl!’s exuberant bass.

The Rush Hour saga is a classic; similar to the movie’s actors, these two besties are from entirely different worlds! The lovable Black Carl! hails from Birmingham, AL but has gained fans from coast to coast. While staying booked and busy, his effervescent personality shines through his impeccably curated performances. This summer, Black Carl! has enchanted major festivals such as Okeechobee, Sonic Bloom, Shambhala, and Yonderville. He works hard to capture the crowd’s attention and succeeds at every set.

On top of that, Black Carl! is juggling not two but three musical projects! For his third, he joins his other (other) half, VCTRE, to form Integrate. All three of these ventures are on track to drop new music, so props to Black Carl! and his impressive dedication.

“When Eric and I first met, we joked about making a song called “Rush Hour.” Three years later, we got to play the biggest tour of our careers, we’re putting out the Rush Hour EP on DeadBeats, and Zeds Dead played our title track at Red Rocks. It’s hard to believe, but we’re so thankful for the support of our fans, friends, and family who got us to this point.”

The other half of the talented twosome is Saka, who has since relocated from Hong Kong to Los Angeles. Their undeniably brilliant sound draws inspiration from an eclectic variety of leftfield bass. Saka’s style cannot be confined to a specific genre; it’s powerful yet whimsical and colorful, thus giving their listeners the best of both worlds. For example, “Masamune,” released earlier this year, and the title track of their Penumbra EP are favorites of mine. Also known for dazzling audiences, they’ve graced the stages of Coachella, Ultra, and Lightning in a Bottle, amongst others, this year. Saka’s promising future glistens as bright as their music.

The duo’s distinct talents blend into a concoction of dreamy vocals and hard-hitting bass.

Black Carl! and Saka are great at evoking imagery through their music, and the Rush Hour EP is no different. Each song portrayed an aura of colors, emotions, and elements as I listened. First is my favorite, “Heaven On Earth,“ featuring vocals from The Lie Within Callie that captivate your attention from the start. The airy lyrics illustrate hues of purple as the build-up staggers and then transforms into a hypnotic bassline. Delicate yet spirited nonetheless. Float along through the boots and cats of this groovy dancefloor anthem. Secondly, the energetic title track, “Rush Hour,” has a lengthy intro that intensifies with every second. The tempo revs, then suddenly, swords are drawn, and a battle scene commences. A rapid fire of bass is unleashed, embellishing an explosion of golden fragments with every blow. This hefty tune has become a staple in their sets, and rightfully so!

“Brutal,“ featuring Protial, is sharp and spunky. To emphasize the prologue, this song does, in fact, go stupid. The drizzling melody of notes and tones swiftly develops into a cobalt sea of funky accents; there’s no choice but to bounce along to the wavy rhythm. Each rippling snare lingers like the high tide before it crashes onto the shore—another perfect embodiment of Saka and Black Carl!’s expertise. Lastly, things get wobbly on the final track, “Red Dragon.“ Its’ eerie cadence is delectable, and each fleeting knock will send a chill down your spine. The boys switch it up on the second drop by adding spry beats deviating to a festive vibe of sprinkling crimson confetti through each pulse. Without a doubt, the EP is magnetic from start to finish.

In conclusion, opposites must attract because, on top of this solid EP, the Rush Hour tour has been a success so far! Beginning in August, the crew has already left their mark on sizable venues such as the Intersection, the Concourse, and even the Black Box. Black Carl! and Saka releasing the Rush Hour EP is only the kickoff; we absolutely love to see these two artists flourishing. Don’t miss your chance to catch these two goofballs on tour!

And if you’re looking for new music, keep up with our weekly Spotify Playlist, Fresh Hunts, or follow us on Twitch. Whether it’s the newest drops from Black Carl!, Saka, all your other favorite artists, some old school, or underground—we just want you to hear it.