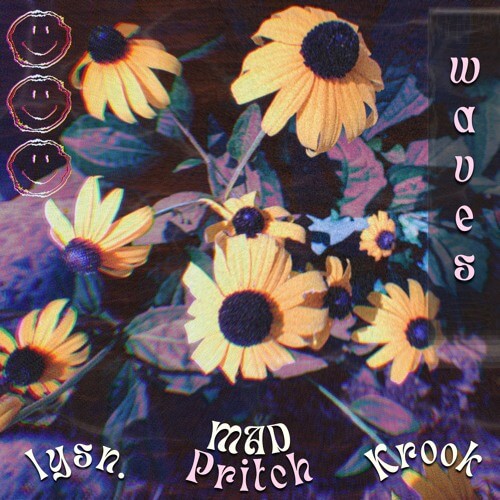 Ride Your Own ‘Waves’ With lysn., MAD Pritch, and Krook

Good things take time and the latest collab, “Waves,” from lysn., MAD Pritch, and Krook is proof. After over two years of this attitude-filled tune being in the vault, these three set it free and we could not be anymore stoked on it.

“Waves” is produced and mixed by the talented minds of lysn. and Krook, who are taking over the underground scene with every release. Lyssa Pearson better known in the scene as lysn. is one to keep an eye on. With past collaborations including Wreckno, G-Space, and others to come, she is slaying her way into all the right spaces. She is originally from Florida and is now making “Waves” in New York along with her partner, Krook. If you were lucky enough to catch lysn.’s Okeechobee set, then you know exactly why she is on our radar.

Based in Brooklyn, but surely taking on the bass and dubstep scene across the states is Kevin Krook, who goes by his last name. Having shared stages with big names such as The Widdler, Yheti, Pushloop, Ternion Sound, and Black Carl!, Krook has a bright future ahead. Be sure to peep his discography and be on the lookout for his name on upcoming lineups.

And, of course, the alluring vocals you hear are from the multi-faceted MAD Pritch. On “Waves,” she raps, “I’m a genre blender mixing all the roles,” which holds true for the producer, DJ, songwriter, and rapper. Maddie Pritchett is based out of Indianapolis but has followers swooning over her bars all over the map with her. She recently performed at Yonderville and Circus of Life Festival and has fire tracks under her belt with Wreckno, Eric Ray of EAZYBAKED, episcool, and more.

“When we stop and think about it, we realize that everybody rides their own damn wave.”

As you can see, lysn., MAD Pritch, and Krook truly all have big things ahead of them. The “Waves” they are riding are uniquely their own, which is evident in this track. It doesn’t necessarily fit into a typical subgenre of bass, but all we know is we absolutely love it. The positive energy exudes from the lyrics to the beats and brings listeners to simply get down. We will definitely be bumping this one for a while.

Stream “Waves” from lysn., MAD Pritch, and Krook, below! We’d love to hear what you think.

And if you’re looking for new music, keep up with our weekly Spotify Playlist, Fresh Hunts, or follow us on Twitch. Whether it’s the newest drops from lysn., all your other favorite artists, some old school, or underground—we just want you to hear it.