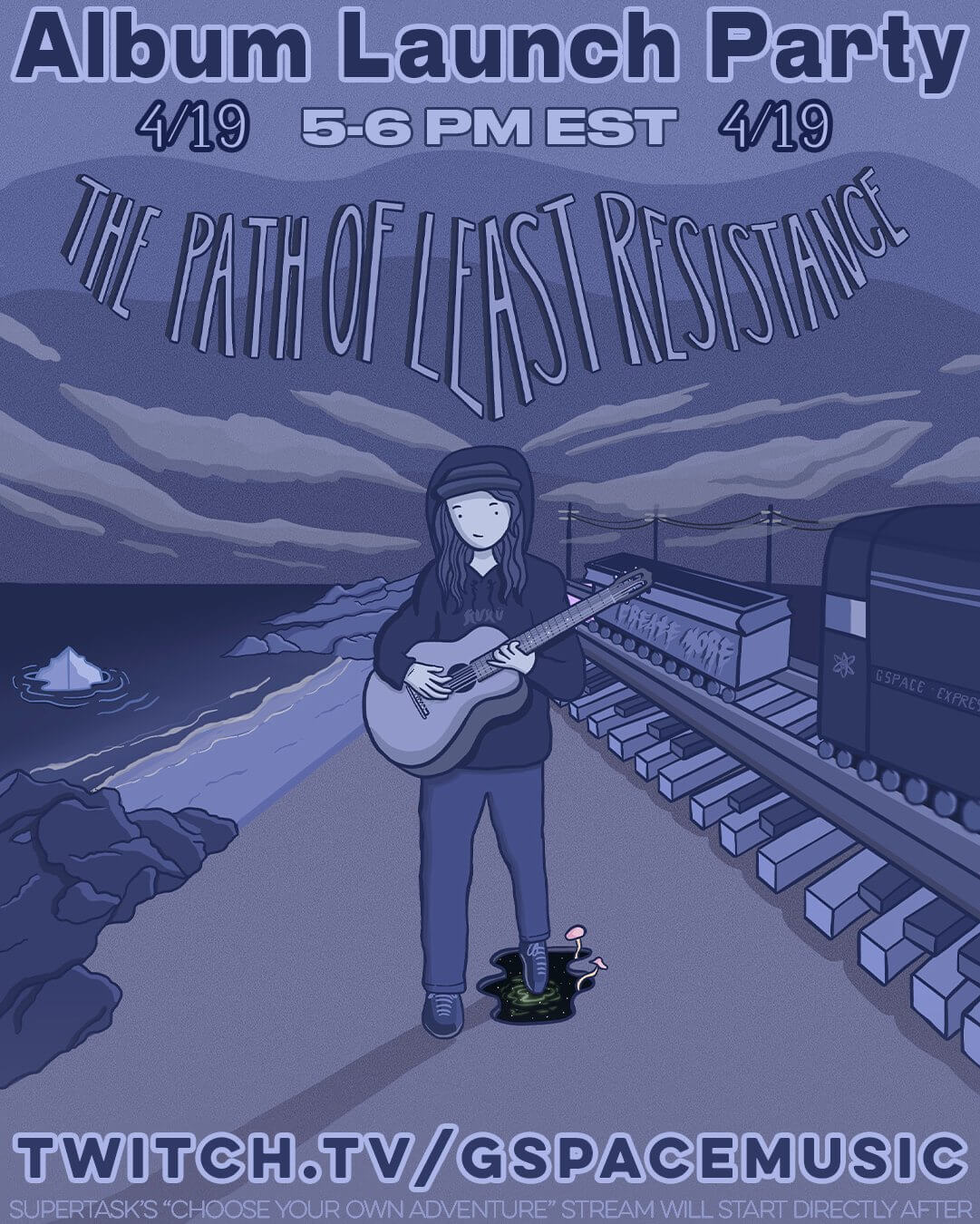 Take ‘The Path of Least Resistance’ With G-Space [EXCLUSIVE INTERVIEW]

In this house, we have no choice but to stan G-Space, but really, how could you not? His signature sound isn’t one you can simply skip over. Keys, strings, and his own unique vocals blend effortlessly on top of his intense low-end flows. His latest album we’ve been patiently awaiting, The Path of Least Resistance, dropped today, on his very own Iceberg Productions, which drives us deeper into the intricate inner workings of G-Space’s personal sound.

Electric Hawk got the opportunity to chat with G-Space and have him as a personal guide down The Path of Least Resistance.

Corie Odom, Electric Hawk: The G-Space sound to me can be described as unique and unconfined, but how would you put your sound into words?
Grady Bergin, G-Space: Just music for world peace. Music is a universal language that can bring all people together. I love combining all styles & genres from around the world and mixing them with futuristic sound design. I hope to perform all my music with a full symphony one day while I play the grand piano with CDJs on top of the piano, haha.

“This album is about following your heart, it’s the path of least resistance”

CO: Congrats on your newest release, The Path of Least Resistance. When did this album start coming together, and what were the inspirations?
G-Space: I was pretty depressed last Summer and unable to write music like I normally do. I was home visiting family, and I found that my only musical outlet was playing my mom’s acoustic guitar. It was the path of least resistance for me. I didn’t want to force myself to produce electronic music. Soon enough, I had written four songs on guitar: “Differences,” “The Road is so Cold,” “Oh Years Ago,” and “I Been Depressed.” I eventually recorded the guitar through my laptop mic into Logic and added some production elements. Those songs were the foundation for my album.

CO: Do you have a personal favorite track from the album? Is there a reason it’s your favorite?
G-Space: It’s hard to say because it changes every day, but I think “Oh Years Ago” is my favorite. Mostly because it sounds like Nirvana, mixed with 100 Gecs, mixed with Vampire Weekend, or something like that, haha. I like the organ I played in it too, along with the guitar. It’s definitely the most unique song I’ve made, and I like how it has different sections that are all unique.

CO: The blending of guitar and keys in this album is amazing. What made you go from guitarist/pianist to electronic producer and then finding a way to merge those worlds perfectly?
G-Space: I love all instruments & combining genres of music. I will always respect the Grateful Dead because they played different genres of music in their live shows. My dad used to follow them back in the 80s, and his favorite part of each show was when the band would do “Drums & Space.” They would pretty much take a set break and start playing with whatever technology they could get their hands on at the time: synthesizes, metal piano strings known as “the beam” that Mickey Hart created, midi instruments, and drums. My dad actually came up with the name “G-Space” back in 2012 because it’s always been about drums & space. And the “G” stands for Grady, Grateful, Gaia, etc.

CO: I feel like the album artwork has some deeper meaning? Can you explain why you chose it?
G-Space: Renee King, Ruku Customs, has been doing my album art for the last 3 albums: Snap Season, Lucid Retreat, and The Path of Least Resistance. I’ve released an album on my birthday on 4/19 each time, and we are happy to keep this streak going. She really tried to keep the album art consistent. As you can see, I am stepping out of a portal on this album art. If you look closely, you can see the green energy from Snap Season and the art from Lucid Retreat in the puddle. It is like I’m stepping out of a portal from my last two albums into a whole new world.

CO: You have a few collabs on this album. Who has been one of your favorite collaborations you’ve done?
G-Space: This is so hard to answer. I think “Are You Reminded,” the collab with Pipus, tiedye ky, and my Uncle Mike, is the most sentimental to me. It was originally recorded with Pipus, Kyle, and me during the last night we all hung out together. We also recorded the Pipus verse for “Space Cowboys” that night. Anyways, it was a great night hanging together; Kendra & Zia were there too. We had so much fun recording music and then finished the night at Ortliebs in Philly.

At the end of the night, when we all had to go home, I was like, “aw, this is sad. I don’t want this night to end,” and Pipus looked at me and said, “what do you mean, this isn’t sad? You just moved to Philly right down the street. There’s nothing sad about this. We will see each other soon.” I feel like that is the most beautiful thing he could’ve said. Just recently, I found the project file on Kyle’s computer, and we finished it up. My uncle mike added some harmonica licks last minute to really bring the track together.

CO: Dream collaboration?
G-Space: I’ve been fortunate enough already to have a lot of my dream collaborations come true. As far as some collabs that haven’t happened yet: Pretty Lights, Zeds Dead, Gramatik, CharlestheFirst, and Liquid Stranger are some that come to mind <3

CO: What has this past year off from shows done for yourself and your music?
G-Space: It really made me reconnect with myself, my friends, and my family. I feel like I grew a lot spiritually as a person.

CO: Now that shows and festivals are returning, do you have a dream/goal festival or venue you’d like to play?
G-Space: Red Rocks, The Gorge, Shambhala

CO: Out of curiosity, when was the first time you did a flip or tricked on stage? What provoked it?
G-Space: I can’t remember, but Martial Arts Tricking has always been a part of my life. I love flips, kicks, twists, and breakdancing, haha.

CO: Which track on this album are you most excited to play live?
G-Space: Lucy Drippin is definitely the festival banger that I can’t wait to rinse.

CO: If you had to pick a single track, out of your entire discography, to perfectly describe G-Space, which would you choose?
G-Space: Hmmm….. maybe Dopeness Monster off my piano wubs EP <3

If you haven’t yet make sure you check out G-Space’s newest release, The Path of Least Resistance, also make sure you wish yung Grady a very Happy Birthday too 🙂 We look forward to continuing to watch this project blossom, transform, and exceed every expectation. We also look forward to hearing this album on a proper sound system very soon!

Also, tune into the album listening party going down at 5 PM EST on G-Space’s twitch.

Stream The Path of Least Resistance below!

And if you’re looking for new music, keep up with our weekly Spotify Playlist, Fresh Hunts, or follow us on Twitch. Whether it’s the newest drops from G-Space, your other favorite artists, some old school, or underground—we just want you to hear it.

Khiva Proves To Be Uncaged With New ‘Phantom Forces’ EP