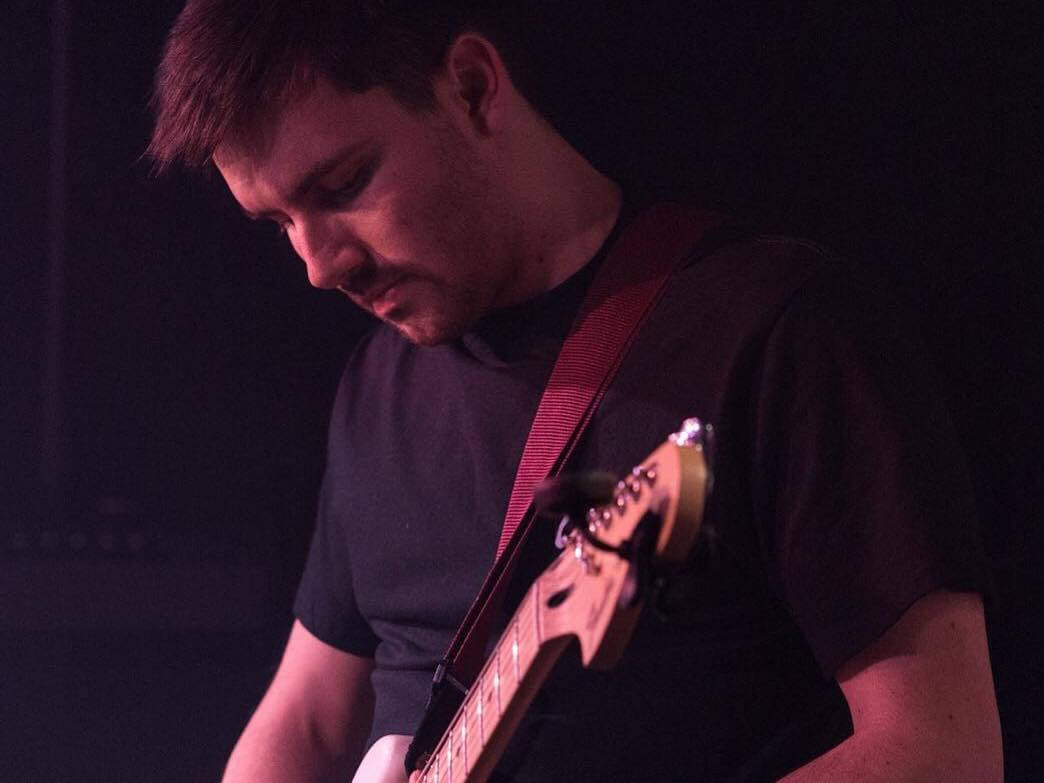 Back in November, we covered a funky remix of SZA’s “Broken Clocks” by Mir and Náttúra. But on Feb 5th, we got an announcement that Mir would be doing a rebrand to Sasha Rome.

He was kind enough to explain why the rebrand, his influences, and what direction he’ll go next.

The NYC producer has an id3.fm live stream coming out live on Sunday, February 15 at 6 pm ET.
Stream it here on Sunday.

Arielle Lana, Electric Hawk: Thanks for taking the time to talk! You’re from New York City, right? I am too, I live in Brooklyn!

Sasha Rome: Yeah, I live in Midtown, but I spend most of my weekends in Brooklyn.

Arielle: I know you’re a part of Bonsai Collective… which did a lot of shows in Sunnyvale in Brooklyn, which is now closed.

SR: We’ve been hoping to find some new venues this year, but I’m really trying to focus on getting more bookings for myself. It was a lot of fun throwing shows last year, for sure. And it was awesome getting the Bonsai community started here in New York, but I’m excited to get more bookings coming my way from other groups so I can focus less on the event and more the set.

Arielle: I’ve actually been to 1 or 2 of your Bonsai Collective shows. What’s your relationship with them, and will anything change due to your sound change and rebrand to Sasha Rome?

SR: I actually co-run it with Capshun and Afrosamuraiist. There are a few other guys who are involved, too. We all split up different tasks, but I’d say we’re the main 3 that run it. But, no I don’t think [that anything will change].

We all kind of started with the more melodic trap kind of sound, but we’re all moving in different directions. Like for me, I’m moving towards house… But there’s something that holds us together and makes us cohesive. We’re all melodic and we also have similar influences, even if we have different sounds.

Arielle: Yeah, I always assumed that since you’ve partnered with my friends at Future Gardens, that you were all more trappy. But since I do follow Náttúra and you pretty closely, I noticed your sounds were changing a lot. That’s why I was interested in where Bonsai was headed stylistically.

Arielle: So what was your turning point in making you rebrand from Mir to Sasha Rome and how would you describe the differences between the two sounds? You said you’re doing more of house, but I noticed a lot of inspiration from funk. How would you describe it yourself?

SR: So I would say with Mir, I got influenced a lot by trap ay the time so my influences at the time were Ekali, josh pan, sam gellaitry, and Oshi. But I always liked the melodic stuff because I started a band in high school and one in college. We never took it super seriously, but I think because of that band background, I always strove more towards that melodic side of electronic music.

But I’ve always liked indie-dance and funk music. It was once I started playing shows—my first show was in late 2018—and doing a lot of shows with Bonsai in 2019, I liked dropping stuff that was more dance-y than trap… Because I like trap still, but the main thing you can do is headbang, really. But with house music and funk music, I think there’s more freedom to dance.

Arielle: You can also twerk to trap!

SR: True, true. *Laughs* I still love trap! It hits hard, you know. But I started noticing like half my set was house, so I thought I should start making it. And then I started experimenting with it more last year, and I had a lot more fun making it and I couldn’t stop making it. I stopped making trap pretty much, even though I still like to dabble in it.

Oh! Another difference between Mir and Sasha Rome is when I was Mir, I was listening to a lot sadder music, but then with Sasha Rome, I want it to be a more upbeat project. I’ll still have some mellow tracks, but I’ve just been listening to a lot more funky house stuff like Kaytranada—he’s a huge influence for me right now, for sure. So the main differences right now are the mood and the genre.

I also want to integrate guitar because that’s something I’ve been playing since I was 15 and always something I wanted to integrate [into my live sets]. It’s been easier integrating it with the house than the trap. Another thing is, with Mir, it was really hard to find me on Spotify because of the way the search works, I was the 42nd search. On Spotify, they would show all the Mirandas first—

SR: Yeah! *Laughs* But with Sasha Rome, I’m the only one. The final straw was in one week—actually—when there were 3 people right in front of me who couldn’t find me. So I was like, “Yeah, that’s definitely a problem.” If it’s happening in front of me, I know it’s happening a lot more when I can’t see it, so [the rebrand] was definitely worth it. It also just worked out timing-wise with the new sound change.

Arielle: So would you describe your sound as all kinds of house or funky house… Or are you still experimenting?

SR: I’m definitely still experimenting. I have about 12 tracks I’m working on right now with different vocalists—which was also a big push since I wanted to work with more vocalists. So yeah, I would say right now most of my songs are more funky-house, like Kaytranada-esque, a little disco influence as well. But I also get a lot of R&B influence and I love R&B vocals over a house track. I’m also starting to get into more tech house and ambient chill house. It’ll be interesting to see how it all blends.

Arielle: I actually noticed that while going through your Soundcloud, even while you were Mir and probably also during your transition… You remix a wide variety of people from pop stars like SZA and Ariana Grande to Graves and most recently, 92elm. Who’s your dream “I know I’ve made it” collaboration?

Arielle: Yes, like by saying it now, we’re manifesting it!

SR: Well, Kevin Parker from Tame Impala is my number 1 artist. He’s been my favorite artist since 2012. I’ve been following his whole path and I get a lot of influence from him, even if it’s not always apparent. Because I don’t just listen to house, I love psychedelic rock and indie rock, too. So I’d say him and Kaytranada, since they’re my biggest influences right now.

Arielle: That’s a great segue to my next question because I read your interview with Traxx24—

Arielle: Yeah, I couldn’t even find the date! Well, you named your taste in music, and one of them was funk, which I could definitely see, especially when you dropped that SZA remix. You also named Ekali and Flume as your biggest EDM inspirations. Now you’re saying Kevin Parker and Kaytranada. Is there anyone else who inspires you? It doesn’t even have to be electronic.

SR: SG Lewis… He became my top artist of 2019. That kind of snuck up on me, but I just really like his style. Daju, who’s really cool, and has a bunch of really cool remixes on Soundcloud. Reaper—he’s like psychedelic indie stoner rock or something, but it sounds very modern and he has a really interesting blend.

When I started Sasha Rome, I really wanted to blend Kaytra-style funky house with more of that psychedelic music and I would say there are a few tracks coming out like that, but that’s what I was going for in this rebrand.

Arielle: Well, I know you moved to America from Russia when you were 4… So why the name Sasha Rome?

SR: So, Alex is actually middle name and the Russian nickname for that is Sasha. I always want to call back to my heritage because even though I moved at a really young age, I still grew up with Russian parents and all my extended family is still there. I still speak Russian with my parents so [my heritage] has had a really big impact in my life. It’s something I definitely want to call back to as much as I can and make part of the project. I’m actually doing a mix for Russian podcast in one of these coming week! So that’s the Sasha part.

Rome… It took me a little bit longer to find the last name. I wanted something that went well with [Sasha], but one of my favorite producers is Danger Mouse. He’s produced for Gorillaz, The Black Keys, The Red Hot Chili Peppers, and was a part of Gnarls Barkley. So he’s been a part of a lot of really cool projects. Well, he has an album that he was working on for 10 years called Rome and I really like that album. I also love the aesthetic of Ancient Rome and wanted to integrate that into the project.

AL: Makes sense! Really cool you make your projects so meaningful. So aside from making groovy tunes—I know you use that word a lot in your bios on social media—Is there anything you’re excited about for 2020?

SR: I’m trying to release a track every single month. I’m excited to do more shows! They’re not confirmed yet, but I’m working on it. I’m doing an interview and mix with Degenerates Club, which is exciting because he stopped for a while and he’s starting it back up my mix. and he’s been a huge influence in my life. He does a lot with underground artists.

I’m also going to be starting up a big project called “Grooves and Potions” which will start on Twitch and I’ll upload it to YouTube and Soundcloud. Basically, I’m going to have mostly local [NYC] producers come into my studio and do a mix with a 15-30 minute interview.

The potions part is I’ll have them bring their favorite drink, and it can’t be one that’s been repeated before. It doesn’t even have to be alcoholic—just a drink that speaks to them. After the interview, I’m going to have them do a 15-minute beat challenge! I want it to be a big project and I’m just excited to be working with and meet a lot more local producers because there’s so much talent here. I just want to create a platform to showcase all my talented friends out here, so hopefully will get that up within the next month.

Arielle: We’re excited about it too! We’ll keep an eye out for it!