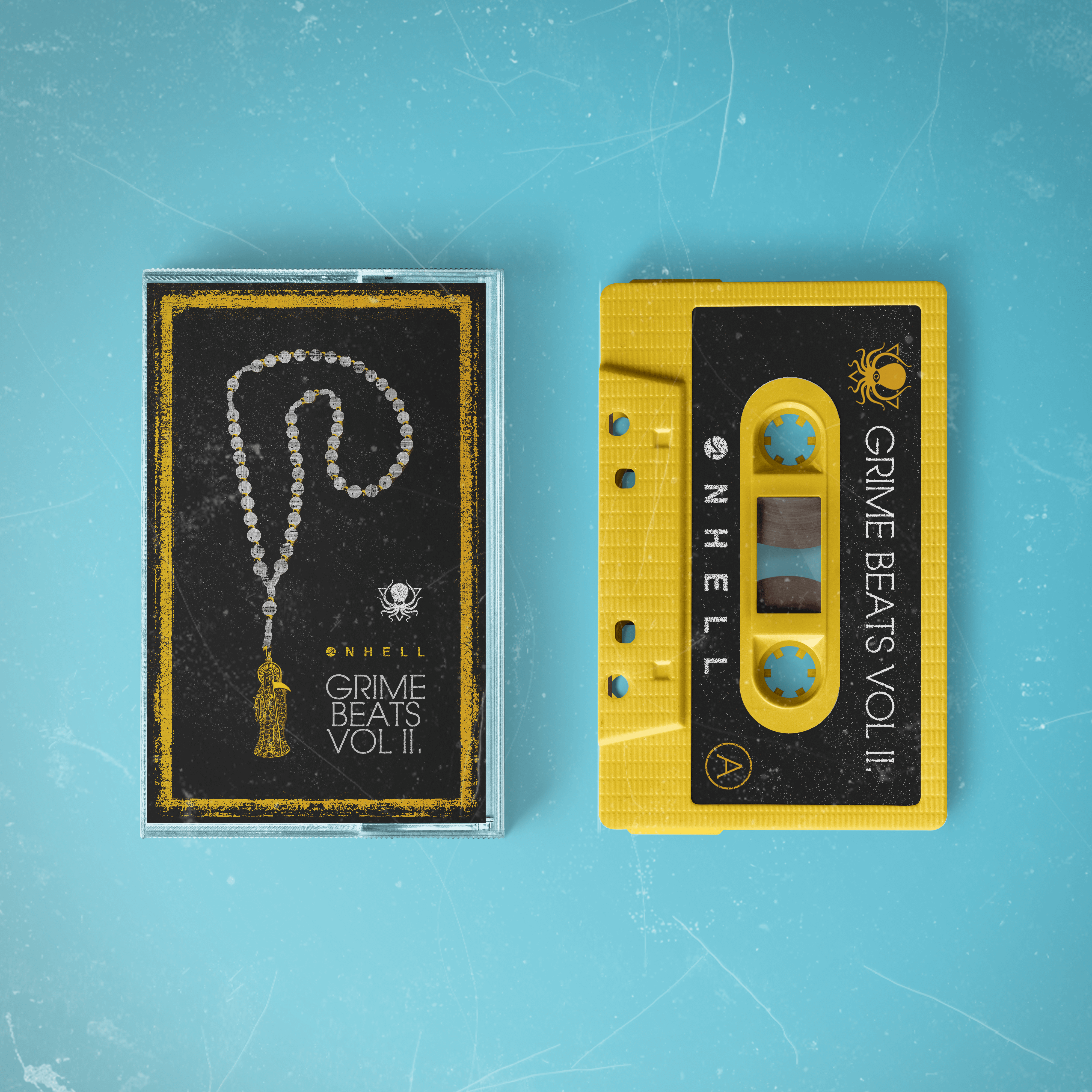 By Christian RamirezFebruary 15, 2022No Comments

After a wonderful interview, the Salsa beatmaker, ONHELL, has fully dropped Grime Beats Vol. II, his second installment in the series. A 10-track collection releasing on Deep, Dark, and Dangerous, that showcases his shift to a more UK grime-inspired sound design. ONHELL’s countless hours in the lab have paid off for a well-rounded, contentious body of work.

Tapping into his personal history, ONHELL combines his current interests to create a splendid beat tape that represents his progression as a producer. His distinctive melding of melodies, heavy bass, and homage to the UK sound, Grime Beats Vol. II is a force to be reckoned with!

Let’s deep dive into this assemblage of soul-moving tunes!

Paying homage to Santa Muerte, A Mexican Neopaganism Saint, “Holy Death” becomes the auditory essence of death. A constant reverberating bassline echo’s in and out throughout the entire track with a heavy bass drop that is decorated in grimey synths. A song that best represents the patron of outcasts and the oppressed.

A song that is a testament to bartering, ONHELL indirectly made this song when trading music lessons for Spanish lessons. Chopped tunes and bass elements encompass “Learn Spanish” with distorted and very distant vocal work permeating throughout the song. This happy accident ended up becoming more than a simple lesson.

“The Rake It Up Riddim”

ONHELL · ONHELL – The Rake It Up Riddim (Electric Hawk Premiere)

This bass music anthem was probably the most anticipated release of the collection. “The Rake It Up Riddim” showcases ONHELL’s evolution in sound design. Everyone wanted a piece of this tune and now we finally have it to be on repeat till our heart’s content.

This next track is the only collaboration on the project. Joining forces with London-based artist, Fracture, this mishmash perfectly represents their eccentric styles. ONHELL’s interpretation of grime shines through while stripped-back elements exemplify his love for the square wave sound.

Beginning with muffled rap vocals that fade out, you’re hit with a steady and heavy breakbeat bass. “Imploded Candle” serves as a light that guides you through a much darker time within this journey. With ominous breaks in between, this track will have you reflecting on whether you want to continue or not… but you will!

This next track draws inspiration from one of the most feared markets in Mexico City. While visiting, ONHELL discovered a different world there and strove to embody it as much as possible in “Tepito Mercado.”

The shortest track from ONHELL on Grime Beats Vol. II, a little over a minute long, “Piano Worship” lives up to its name. The sounds of piano keys begin and permeate throughout the entire tune, with steady kicks and portentous bass. A short, breather, if you will.

A personal message within this project, “Outcast” is for those who were shunned from society. Santa Muerte is for the castaways and has developed her own religion in the area. Howling synths and hollow chimes envelop the listener before being joined by a gloomy bassline. Keeping its signature grimey sound, you can picture yourself walking down an isolated road in the dead of night.

Finally, once done with this journey, you are ready for “Devotion.” For, Santa Muerte has many devotees that reflect their own hardships, identities, practices, and realities. A mournful melody, this final track ties everything together and culminates in a pensive state of mind. A gloomy but welcoming end to a dark journey.

ONHELL invites us into a more personal part of his life through music.

Grime Beats Vol. II is a testament to his identities and experiences as a producer in the scene. His hard work gives tribute to the Saint that started this odyssey:

I’m a mixed mestizo Mexican hailing from California making grime beats influenced from the UK. I aspire to comb together my cultures, my musical influences and my differing perspectives & combine them all into something of my own. Santa Muerte has been big in my life where god doesn’t exist. She looks after those forgotten and less fortunate to be accepted, for this, she’s my kind of saint. This album is dedicated to her.

This astounding project must be listened to in its entirety for maximum experience. His rendition of UK grime along with personal life influences that have guided him, ONHELL did an amazing job with Grime Beats Vol. II. 12/10 recommend!

And if you’re looking for new music, keep up with our weekly Spotify Playlist, Fresh Hunts, or follow us on Twitch. Whether it’s the newest drops from ONHELL, all your other favorite artists, some old school, or underground—we just want you to hear it.