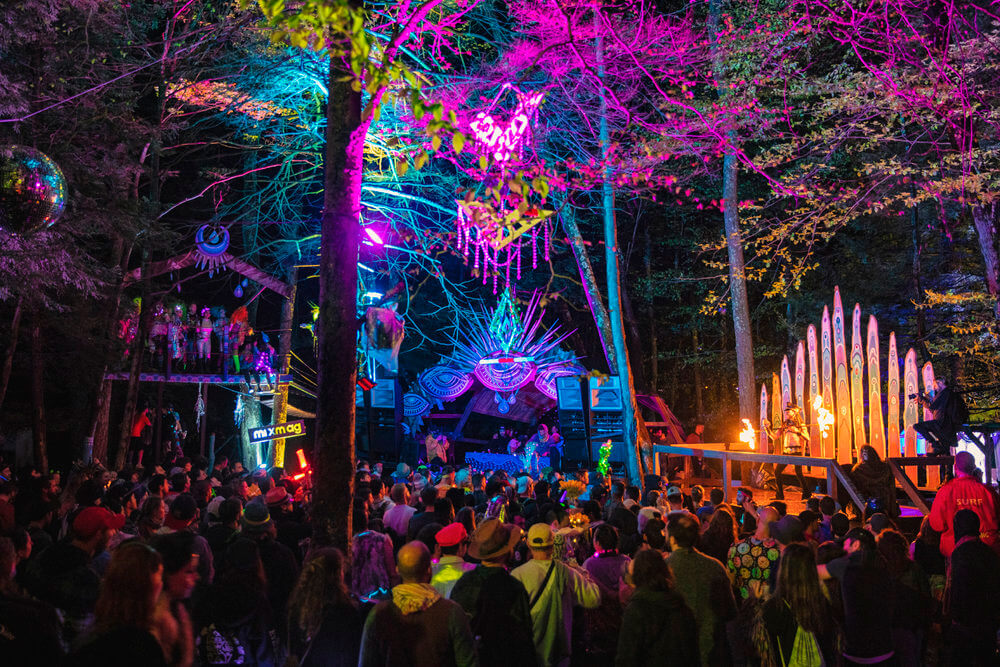 Let’s Get Weird This Summer at Elements Music & Arts Festival

RIP to our bank accounts. Tis’ the season of one incredible lineup drop after the next that has us contemplating everything to make an extra buck. Elements Music & Arts Festival has once again delivered an outstanding lineup that brushes on every single genre to satisfy your electronic cravings.

Imagine Ru Paul’s drag race went to Burning Man and decided to start a festival. That’s Elements Music & Arts Festival in a nutshell. Nestled in the forest in the middle of Lakewood, Pennsylvania, Elements Festival brings all the summer camp vibes to this one of a kind music festival. The festival itself is situated on the property of an overnight camp which truly makes you feel like your being dropped off for a weekend of pure debauchery.

The festival features a wide array of activities to ensure your stay will be more than satisfactory. With new larger than life art installations, wellness initiatives, interactive performances, vibe villages, a functional pirate ship, and summer camp-inspired activities, this is sure to be the most memorable summer camp experience. Entering its fourth year now, we have seen remarkable growth from the team at BangOn!NYC. It is clearer than ever that the team has found their niche in the festival market and delivered a BOMB. Let’s dive into the goodness now.

“Festivalgoers can dance from dusk until dawn, journey through immersive environments, take a dip in the serene lake, indulge in delicious eats from craft vendors, or hit reset with a meditative sound bath or expert-led yoga class.” – Brett Herman Co-Founder and Managing Director at BangOn!NYC.

Elements Festival always reveals its lineup by stages as each stage houses a special vibe and sound that makes it distinct from the others. First up we have the Fire Stage featuring all your late-night tech-house vibes to woogie the night away.

We are treated to a takeover provided by the newly appointed house head, Diplo and his new label, Higher Ground. After seeing him multiple times last summer, we can confirm that the sounds from the Mad Decent founder have changed significantly. Ridding of the trap and Billboard top 100 anthems, Diplo has focused his sound towards the deepest depths of disco and 90s house music to create a one of kind dance party. Along with Diplo, well be treated to a must-see, ambient DJ set from Bonobo, the house Gawd Chris Lake as well as some up and comers from Dirtybird artists like J. Worra and Mason Maynard.

Looking to lose your mind in the bedlam of psychedelia with a hint of bass? Look no further than the Earth Stage. The hypnotizing, Jade Cicada will take center stage for a performance that is sure to melt your mind. And it doesn’t stop there. Headlines for the stage also included the funkadelia master, Gramatik and the super versatile, TOKiMONSTA.

The undercard on this stage is what really tickles our fancy, however. The downtempo master, Emanicaptor featuring the legendary Android Jones on visuals has to be the early favorite here. Brains will undoubtedly be misplaced and needed to be picked up at the lost & found when your parents come on Sunday. That’s only the beginning. We have Rusko, Manic Focus, the legends KOAN Sound, Esseks, The Widdler, Pushloop, Templo & soooo much more to scratch that bass itch. Not to mention, our very own REZI, will be gracing the stage with a performance that we can guarantee you don’t want to miss.

“We are working with our community of fans and cross-section of Northeastern partners to make this festival our biggest yet in terms of attendance, music, art, programs, and features.” –Emily Alworth, Marketing Director.

The Air Stage boasts a house party that will undoubtedly go into the sun comes up. If you’re looking for that mixture of weirdness filled with luscious, low tempo vibes, the air stage is calling you name. Four Tet leads the crew and with a new album slated for March, this surely a not to miss set. The Canadian duo, Bob Moses will also treat us to an iconic club set. We have only heard remarkable things about their one of kind sets. Don’t sleep on that rowdy Desert Hearts crew. You know it’s going to be a wacky, dance party when they take to the stage.

Finally, we have the Water stage. Steering the ship is some guy you may have heard of before, Claude VonStroke. We heard he throws some pretty ratchet and wild parties. Looking to wind down or heat the party up? The Water stage is the perfect place to cool off your day. Located right on the lake, we can assure you that the party won’t stop here.

So what are you waiting for?! Purchase your tickets HERE today! With numerous options for camping, including cabins, tent only and glamping. There is something to keep everyone cozy for the weekend in the wildness. See you at camp!

Where Electric Hawk will we be this year?

Invitation to the Decadence Arizona Has Arrived: First Headliners Announced

Artists You Cannot Miss at Dancefestopia 2022