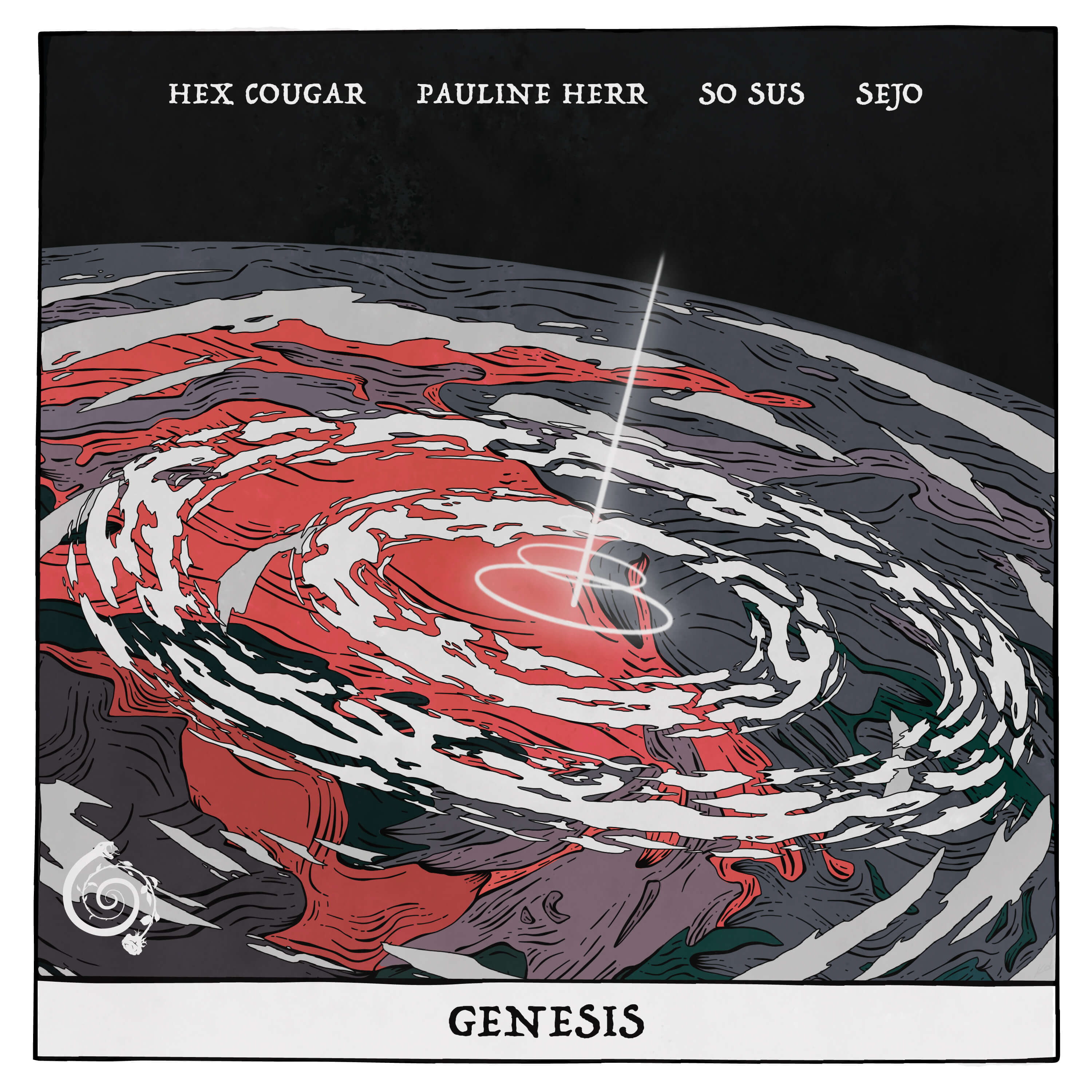 [So Sus Exclusive Interview] The Creation Of The New ‘Genesis’ EP

Hex Cougar’s label Alter/Ego presents its fans with a unique release made by Hex Cougar, Pauline Herr, So Sus, and Sejo. The Genesis EP gives each artist a moment to shine with a specific track they started, which was then passed onto the other producers to collaborate on.

The Genesis EP is only the second release from Alter/Ego, and it gives us a glimpse into the versatile and daring projects that we can expect from this label.

We sat down and talked to So Sus about the creation, collaboration and inspiration behind Genesis.

Selbe Dittman, Electric Hawk: Hey! Thanks for taking the time to chat with me about the Genesis EP! How have you been doing lately?

So Sus: I’ve been doing well. Busy, but good busy. Just got a lot on my plate but I’m very happy to do it all. Keeping positive, making lots of music, and also making a lot of friends through music and the internet.

SD: What was it like to submit a demo to Alter/Ego and then be asked to collaborate with Hex Cougar on the Genesis EP?

SS: In a word, surreal. I sent a song over and all I  was really looking for was to get one of my tracks on Alter/Ego. The fact that it went beyond that is still crazy to me. I’ve been a huge fan of Hex for 4 or 5  years since about the time I heard “Afterlife” and I think even to this day “Agatha” is still one of my favorite songs of all time. It’s funny how many times I  have used his songs as a reference for my own so I think I’m still struggling to believe it.

SD: Did you go into this project with a certain inspiration for what you wanted to create? Or did it just naturally come together as you each worked on the tracks?

SS: What I think was crazy about the whole process is how little we talked about what we were going to do. We just kinda trusted each other and boy did it work it out. I think we just liked each other’s music and in some way, there’s a commonality between us. I feel like we are all fans of melodies and music that is emotional and visceral and I think we naturally understood each other’s musical language and just worked together to compliment each other. It was a really smooth and natural process.

“Your World” kicks off the EP with its cinematic soundscape, drawing the listener into an eerie aural abyss before dropping into a loud trap breakdown. The intensity of the track ebbs and flows until you’re completely lost in its soundscape.

SD: What was it like being able to work in such synchronicity with your collaborators? Have you experienced this ease of collaboration before?

SS: If you look at my discography I have worked with a ton of artists, from Jon Casey to Farrah, and I’d say 9/10 times it’s pretty easy. I think I just try to make music with people on the same page as me and who are light-hearted. I think personal chemistry is just as important as musical chemistry and if it just feels like you’re having fun with friends you can’t go wrong.

SD: We’re there any hurdles during this collaboration process?

SS: Yes, I think it’s quite funny. When we were making “East Bridge,” Hex was convinced Pauline should sing ‘Meet Me at East Bridge’  but me, Pauline, and Sejo all thought ‘Meet me at the East Bridge’ sounded better. I think that was the biggest hurdle we faced.

An otherworldly intro brings us into “Abyss” before a slicing drop has us floating through the universe these producers have created. Harmonizing vocals add a celestial feel to the track, drawing us deeper into this remarkable piece of work.

SD: Other than it being one big collaboration, how is this release different from what you’ve released before?

SS: Well, I think historically I’ve been kinda known for making a lot of trappy and bassy stuff and as much as I’ve enjoyed that, I’m not really there anymore. Wild sound design and 808s aren’t what I’ve been gravitating toward for the past year. I’ve been more interested in making more emotional and melodic music. I’ve got a lot of unreleased stuff that I think mirrors the vibe laid out in the EP. So I think this EP provides me a chance to make a clear break from what has come before.

The leading single off of the EP “East Bridge” starts out with distant vocals leading into oscillating bass. Drawing inspiration from Cyberpunk 2077, “East Bridge” draws heavily from the wave genre with emotive synths and dark, beautiful bass.

SD: What inspires your sound when making music? Do you have any artists you look up to for inspiration?

SS: Almost every time I start a new song, I don’t really know what I’m going to make, so I think it comes from within a lot of the time. I just start by trying to find a melody that resonates with me. When I feel something, I know I’m moving in the right direction. As for artists, there are a lot that I look up to. Obviously, Hex Cougar, Boombox Cartel, RL Grime, Heimanu, Away; and I have to mention two of my friends – Crimson Child and Hahlweg. In particular, hearing Crimson Child’s album as he made it really triggered something for me. I genuinely don’t think I’d be making the type of music I make now if he didn’t make that album, so gotta thank him for making such an epic body of work.

SD: With shows and festivals coming back at rapid speed, can we expect any So Sus sets this year? And where?

SS: I have upcoming IRL shows but they haven’t been announced yet. But I can talk about Reboot, an online stream from Electric Love Music festival happening on June 18 on their Twitch channel that’s Sponsored by Creative BC and The British Columbia Government. Gotta thank the government for putting money toward the arts during these still very tough times. In Canada, clubs and festivals sadly aren’t a thing yet.

Everything All At Once

“Everything All At Once” rounds out the EP with a mellow vibe. With emotional vocals from Pauline Herr, wavey aural environments, and lush breakbeats, it’s the perfect collision of some of our favorite production elements.

Hex Cougar · Hex Cougar, Pauline Herr, So Sus & Sejo – Everything All At Once

SD: What can we expect from So Sus in the future?

SS: I think you can expect a steady stream of music, good vibes, and a lot of weird tweets. I have some music coming out on some of my favorite labels.

SD: Anything we didn’t cover that you would like to add?

SS: I’m actually really interested in helping producers of any level with their musical journey. I don’t really hold on to any secrets when it comes to making music, and I’ll be happy to answer questions. Just shoot me an email, DM, or send a pigeon haha. I just know what it’s like to want to learn and I like seeing people thrive. For me, music is and always will be a community.

Listen to the Genesis EP below:

Looking for new music? Keep up with our weekly Spotify Playlist, Fresh Hunts. Updated every Friday with all the latest releases. Whether it’s the newest drops from Alter/Ego, your favorite artists, some old-school, or underground…we just want you to hear it.