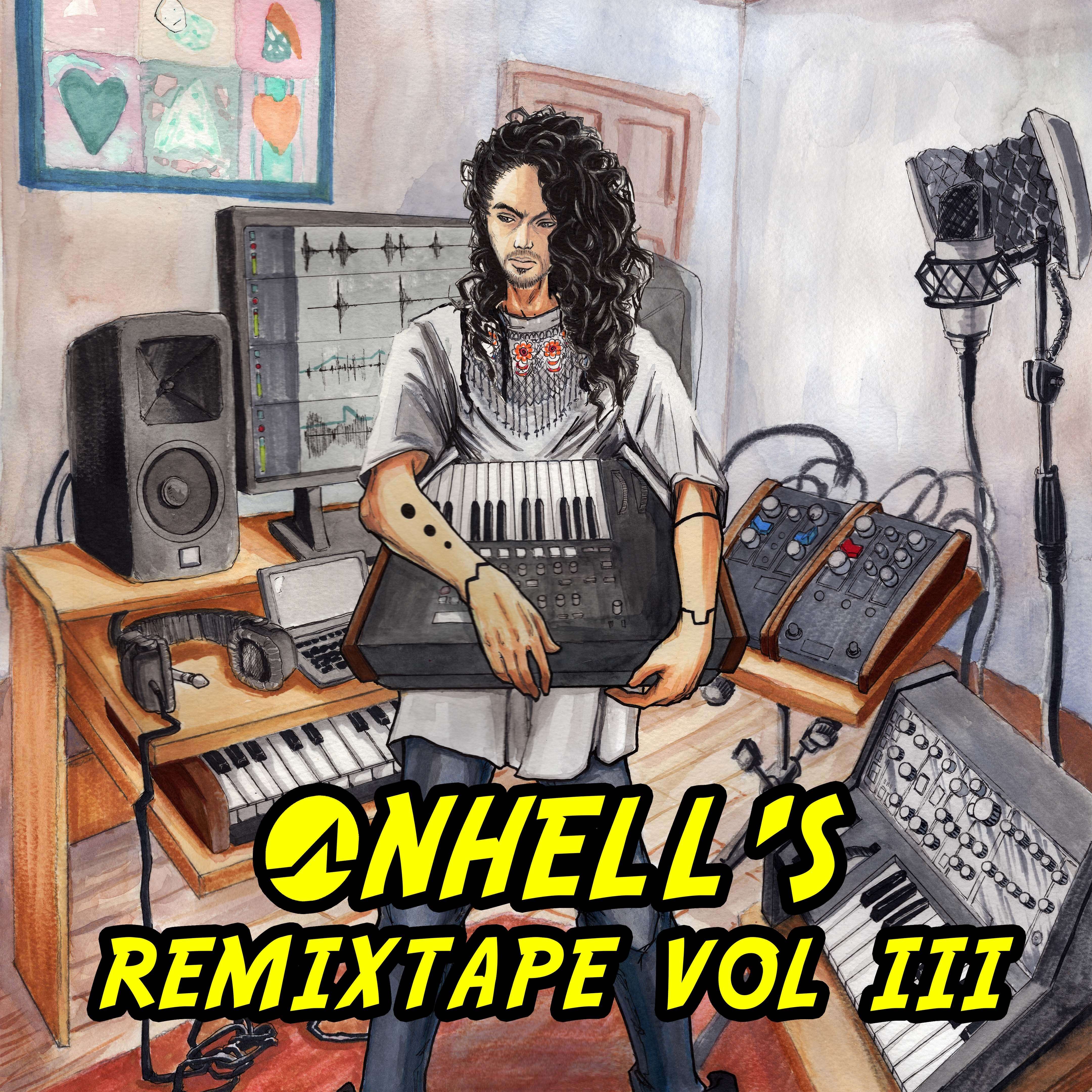 If you’ve listened to ONHELL you’ve probably heard of his Remixtape series that’s filled with thicc remixes blending our favorite genres. This rendition brings us a diverse collection including remixes from Beyonce, Paramore, SZA, Chief Keef, and other iconic artists. We were fortunate enough to sync up with ONHELL and chat about Remixtape Vol. III!

Unfortunately, we were only able to sync up via email. Prepare yourself for more of the rich, lavish, & unedited lifestyle of ONHELL.

Ashley (Electric Hawk): Hi! Thank you so much for taking the time to chat with me!

ONHELL: Ashley, it’s my pleasure. u guys are the loveliest. I feel like yall are the theater kids that are like fuck it, we are doing our own play. but with the bass music world instead. I fuck with the energy.

ONHELL: Trash. But I think the upswing is beginning. The end is nigh. shows will start again.

A: What do you think these Remixtapes say about your project? Are these the artists that influence you or just tracks you fuck with?

ONHELL: Nah, each one of these artists, I love. whether it’s listening to Paramore in high school, to Chimpo and Sam Binga who are friends of mine. I make sure that I love every artist’s music as a whole. The original track is less important than the soul of the artist themselves. Like sometimes I don’t even like to listen to the original tune if I find a dope acapella, so it doesn’t guide me elsewhere.

A: Who are your biggest influences?

ONHELL: Hmmmmmm, fuck, who are my influences? Idk. I mean. I’ve really been trying to focus on my own shit and having myself be the prevailing influence. but it’s sooooo haaarrrddd. like it’s so damn easy to listen to someone else’s music, and start to think, oh that’s better than my art or whatever, and get lost in that shit way of thinking. So for me, it’s been best to just isolate myself from others music as much as possible. I’ve been muting a lot of people on socials. It’s helped. but yeah endless amazing artists that have influenced me over the years. old James Blake, Mount Kimbie, Shlohmo, Eprom, Radiohead, Kanye. Those were the original influences.

A: I personally can’t get over the “Misery Business” Remix. What inspired that? Can we expect more Paramore or throwback emo remixes from you in the future?

ONHELL: I made like 3 or 4 emo remixes and that was the best one. I did Green Day, “Boulevard of Broken Dreams” as well as Hawthorne Heights, “Ohio is for Lovers” but Paramore took the crown. Melodic bass and sad chords is what I truly love, and emo music is basically all that. More emo wave remixes plzzzzzzz.

A: It’s been over 2 years since the last Remixtape! How have you grown as an artist since then? Do you think your styles changed at all?

ONHELL: FUCKKKKKKK. It’s been that long huh. I need to release more music, more quickly. Hmmm. I’ve gotten more confidence being myself, and owning it. it’s not easy and I’m not nearly where i wanna be. but yeah. Like not trying to mimic others, but be myself as much as I possibly can. But that’s like the hardest thing to accomplish.

A: What sparked the idea for the Remixtape series?

ONHELL: Dude. I honestly don’t remember why we called it that. But Eric Dingus would release these mixes of all rap remixes. And they just like floored me. Such amazing sick reimagining of rap music, and all done as a package. But I wanted to just release the song individually, and it kinda grew from there. But this ain’t an original idea. Shlohmo does a similar thing too with sick videos to go along.

Here’s the moment you’ve all been waiting for!

A: We understand if you can’t share your secrets but drop that hair care routine!

SAY LESS. what u need: wet brush, scalp scrubber, eucalyptus shampoo for the scalp, leave-in detangler conditioner, a curly custard, and coconut oil for the scalp.
Use a scalp scrubber with eucalyptus shampoo on the scalp, but don’t brush through the rest of the hair, it’ll dry it out.
Then, brush through hair with a wet brush and leave-in detangler conditioner. Brush out all them curls in the shower wet as wet can get. I ring out my hair so it’s not crazy wet, but don’t wash out the conditioner, you leave that shit in.
Once out of the shower, I use my fingers to run the curly custard through my hair and put the coconut oil on my scalp for dryness. Then you’re done. DO NOT dry that shit out with a towel. Let it air dry or wrap it in a T-shirt.

A: What can we expect to see from you this year? Any more cinematic masterpieces to accompany your tracks like “Graveyard Shift”?

ONHELL: I’mma release all my hard beats i never released in 2020 cause of this fucked pandemic. So in talks rn to get those out and moving. Might release a lil beat release, some collabs, you know the drill. But imma work on an album. So my plan is, release all the beats, and in the mean time work on the album so like in a year, i have something sooooo fucking dope to release with video and everything cool.

A: We know you make pretty fire salsa – what’s the secret behind that?

ONHELL: A single curl in every jar.

A: Anything else you want to tell the people before we wrap this up?

ONHELL: eat more pussy.
try mescaline
any Tolkien nerds wanna hit me up and just talk about lotr, lmk.
shout out all the bi peeps in the world
annnnddddd, hmmmmm, idk, maybe, anyone wanna play aoe2 with me lmk too <3

It was an absolute pleasure getting the chance to chat with ONHELL. Don’t ever sleep on the highly sought-after salsa drops!

Be sure to check out Remixtape Vol. III!

Looking for new music? Keep up with our weekly Spotify Playlist, Fresh Hunts. Updated every Friday with all the latest releases. Whether it’s the newest drops from ONHELL, some old-school, or underground- we just want you to hear it.

March is Women’s History Month. This is an opportunity to celebrate successes and acknowledge struggles women face across the world. If you’re looking to support organizations that educate on women’s health, gender/workplace equity, and more, then look here.