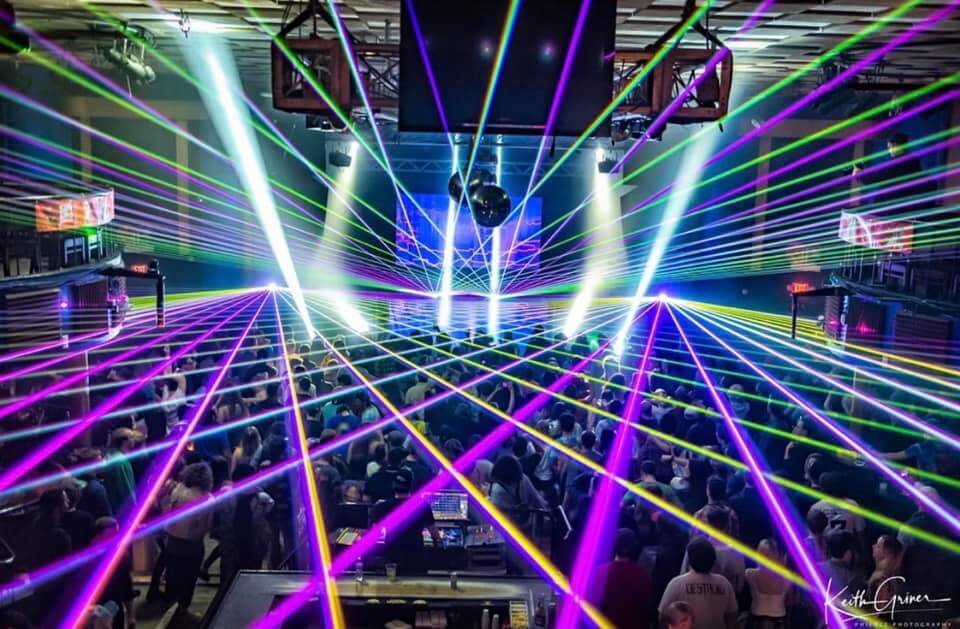 Imagine the last show you went to. Now, imagine it without any lights or lasers. Its just not the same, is it? Show after show, we take these things for granted. The people who work behind the scenes to make our experience holistic often go without recognition – we’re here to shed some light on them, like they do on our favorite artists.

Enter: Chandler Thomann. A Lawrence, Kansas native, Chandler has been lighting up stages across the country for almost nine years. Thomann has lit for the likes of Sunsquabi, The Floozies, Manic Focus, Buku, Shpongle, Wick-It the Instigator, EOTO, Borgore, G Jones, Seven Lions, Paper Diamond, Getter, Galantis, Lettuce… just to name a few. Name a festival or a venue, Chandler has probably been there and done lights.

Staff writer Abby Price is lucky enough to know Chandler and sat down with him for an interview while he was back in Kansas. Check out the interview below.

Abby: So, I have known you for a decent amount of time, but I actually don’t know the story about how you got into lighting and laser design, so let’s start there.

Chandler: When I was still in high school, my best friend’s dad owned Wakarusa Festival (in Lawrence, KS). I would go to Wakarusa every year, and eventually ended up like… selling ice and volunteering wherever I could. I started going to all kinds of shows, got really into visuals, and saw how much of a difference they made at shows. I kind of just decided that lighting design was something I wanted to pursue. So I started working at the Granada and the Bottleneck doing really minimal stagehand work. Any gig whatsoever.

After learning more about the technical side, I got a loan for a small amount of gear. I started practicing and doing shows for small bands at the Bottleneck and the Granada, and eventually, I got hit up to start consistently working with a band out of Lawrence called Mouth. Around late 2015, I met a guy man named Andrew Owsley, who is known as Wick-It the Instigator, and we became friends. He had a show, co-headlining with Manic Focus at Georgia’s Majestic in Fayetteville, Arkansas, and [Wick-It the Instigator] hired me to do that show for both of ‘em. From that point on I started working with Manic Focus, and it just kind of took off from there. It went from an experimental hobby to a career. Here we are, I’ve been doing it for almost nine years.

A: So over those nine years, how has your lighting and design style developed?

C: It’s hard for me to watch old videos sometimes. As I’ve gotten more jobs and the caliber of artists I work for has grown, I’ve gotten better gear, worked with bigger production, lit bigger festivals. It makes you have to learn about multiple styles of fixtures and how to program more fluently. My style has definitely gotten more artistic versus flashier, but that can depend on who you’re lighting up as well.

A: I’ve personally seen you light up artists like BUKU and The Floozies. They are such different artists. Is there a difference in the way that you approach that?

A: Beyond Buku and The Floozies, you’ve lit for some MASSIVE names.

A: So what was your biggest or first moment of “Woah, I’m really f*cking doing it?”

C: Oh man… I think my first Red Rocks was probably it. That was the first time I told my dad like “Hey, you should probably start taking this seriously.” That was back when Pretty Lights was doing his Episodic shows and Manic Focus was on some of those tour dates… Those were definitely cool moments.

A: I’m sure that Red Rocks is on the list, but what is one location or festival that you could do over and over again?

C: Hulaween for sure. I mean, I have a special place for Bonnaroo, because it was actually the first festival my dad took me to when I was 16. I think three years ago, I flew into Bonnaroo and took my dad, and did Manic Focus into CloZee into Opiuo. That was a really special moment with my dad. Then I did Bonnaroo again last year with Sunsquabi and Space Jesus.

Bonnaroo is definitely one of the coolest ones because of the sheer size of it, but Hulaween is by far the rowdiest and most special one to me. I think I’ve had the most fun I’ve ever had at Hula.

A: I’m sure you’ve learned a lot over the years. Not just about lighting and lighting design but also about touring and the industry in general. What has been the most surprising?

C: Well, I had an idea of the harshness that touring does to your body and your psyche, however, I didn’t really think about it from a “do it for nine years” standpoint. I would say my biggest surprise is how important it is to take care of yourself, and not burn the candle on both ends, you know what I mean?

From a job standpoint, I’ve been surprised with how many times you have to deal with people who don’t know what they’re doing. I guess that would be learning patience, haha. Your reputation is everything, and if people know you to be an asshole or a dick then it’s not going to be very fun for you. So definitely learn patience and understanding. And instead of getting on someone for not knowing something, teach them and constructively criticize.

A: If there is anything you could have people know about the life of being a touring lighting designer, what would it be?

C: I would say for my personal situation, just know that me and the person on stage coexist. We know that this is both of us. Any artist that I’ve worked for knows that music comes first and that lights are complementary to sound and that the human brain is going to receive the music before the register the lights, but like… we coexist with each other. And honestly, it’s really nice to not be on stage sometimes. You can still throw down and have a great time but you don’t have to be seen or talk into a microphone and have a cocktail or two or five.

I think people would be surprised how close the lighting guy and the artists that they work for are. You have to be on the same page completely. Luckily, the artists that I have worked for trust me and give me complete freedom and I have a great time with them.

We want to thank Chandler for all of his hard work over the last nine years, making shows an experience that captures all of our senses. Be sure to catch him on tour this spring with The Floozies and Sunsquabi! Seriously – you don’t wanna miss the lasers. Tickets can be purchased here.

Interested in learning more about different parts of the music industry? Check out our interview with visual artist, DATABYTE!

Sol Fest 2022: A Weekend For More Than Just Music