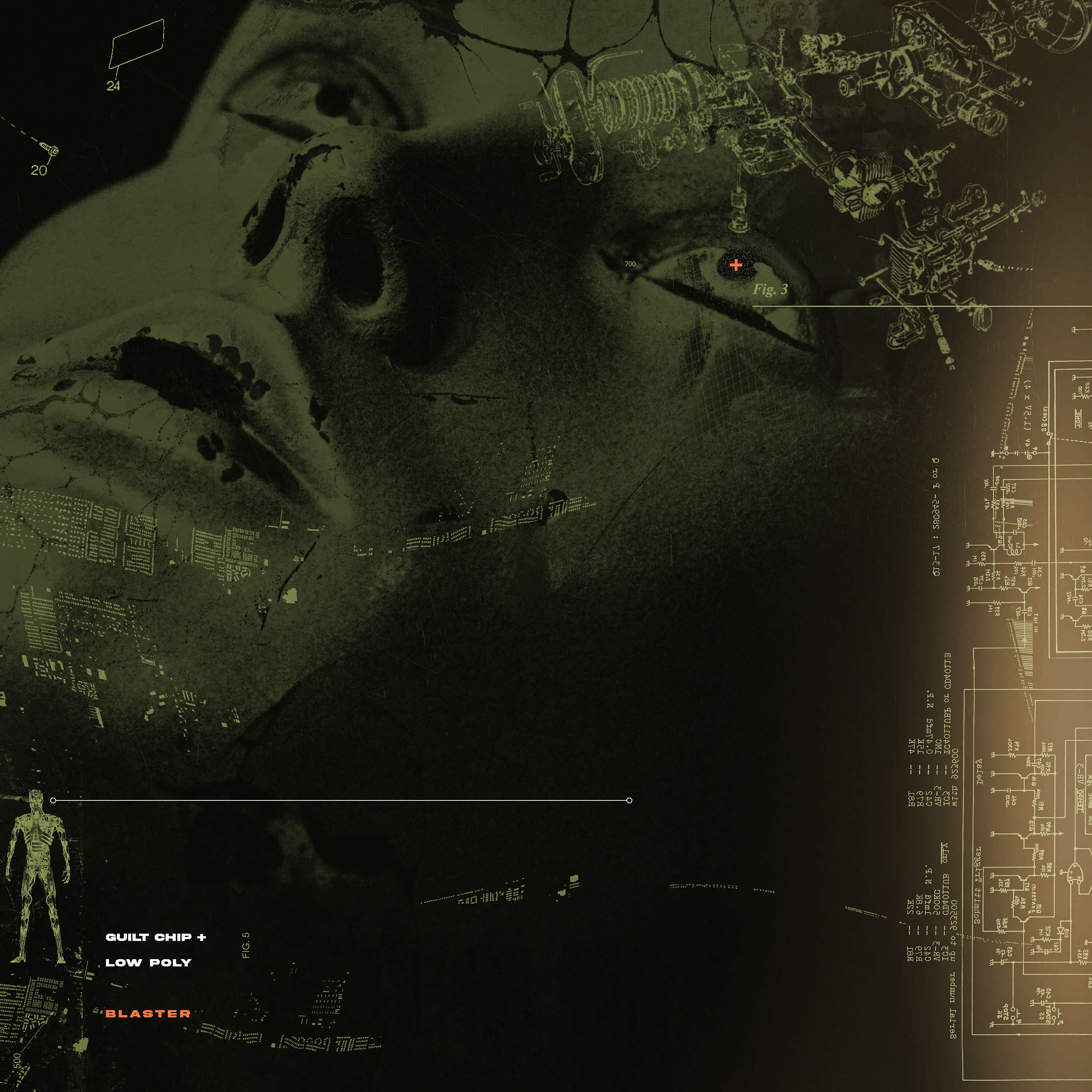 Guilt Chip teams up with Low Poly for a whirlwind of a collaboration, “Blaster.“ Together, they have meticulously crafted a paranoid, robotic track. Even so, “Blaster” has a depth reaching beyond bass music. In this track, released on February 22, Guilt Chip displays his natural flair for distortion alongside the intricate composition abilities of Low Poly.

For Low Poly, the release of “Blaster” comes out following a very exciting development; his gentle and captivating Dreamstate EP was dropped via mau5trap on January 22. Initially, his celestial sounds seem like they would contrast with the dark grittiness that Guilt Chip delivers so often. However, these two artists are like scientists and always keen on experimenting with others. Guilt Chip is well known for his mastery of sound design and talent for developing texture. His unmistakable sound is unquestionably prevalent on “Blaster;” meanwhile, Low Poly adds a production talent that spans across genres. The unexpected duo synergistically collaborated to create an undoubtedly unique experience on “Blaster.”

“Blaster” is an intoxicating mix of glitchy and intensity, paranoia and trap.

“Blaster” opens with no hesitation, using pulsating manipulated lasers and echoing samples to immediately hook in the listener. Guilt Chip and Low Poly immediately paint a picture of paranoia in a technological environment. The introduction then combines driving claps, drums, and bass hits to intensely buildup and drop into a brain-melting first stanza. The wobbling lasers and glitchy breaks create a meshing of modern trap with timeless characteristics of acid genres. Gritty and grimy samples are cleverly composed with underlining horns in the distance.

“Blaster” pushes on and suddenly introduces a second build-up; indeed, the lack of breathing room between sections excellently mirrors the anxiety and paranoia laced throughout the track. The second stanza utilizes a higher-pitched mechanical scratching in conversation with deep bass squelches. It then breaks down into a glitchy trap-like beat, similar to that in the first stanza. Conversely, though, this breakdown feels like winding down the second time around. Following the peak intensity point of “Blaster,” there’s a releasing of this paranoia. Finally, the song devolves, leaving only a haunting reverb interspersed with rattling. It’s reminiscent of the thoughts that linger after being paranoid, consumed by anxiety.

“Blaster” is all gas, no brakes; it’s an intense concoction of glitchy breaks, gritty samples, and trap elements. Guilt Chip and Low Poly have synthesized a vivid cybernetic soundscape.

Play “Blaster” at full volume below, and check out other music by Guilt Chip and Low Poly!

And if you’re looking for new music, keep up with our weekly Spotify Playlist, Fresh Hunts, or follow us on Twitch. Whether it’s the newest drops from Guilt Chip, Low Poly, all your other favorite artists, some old school, or underground—we just want you to hear it.