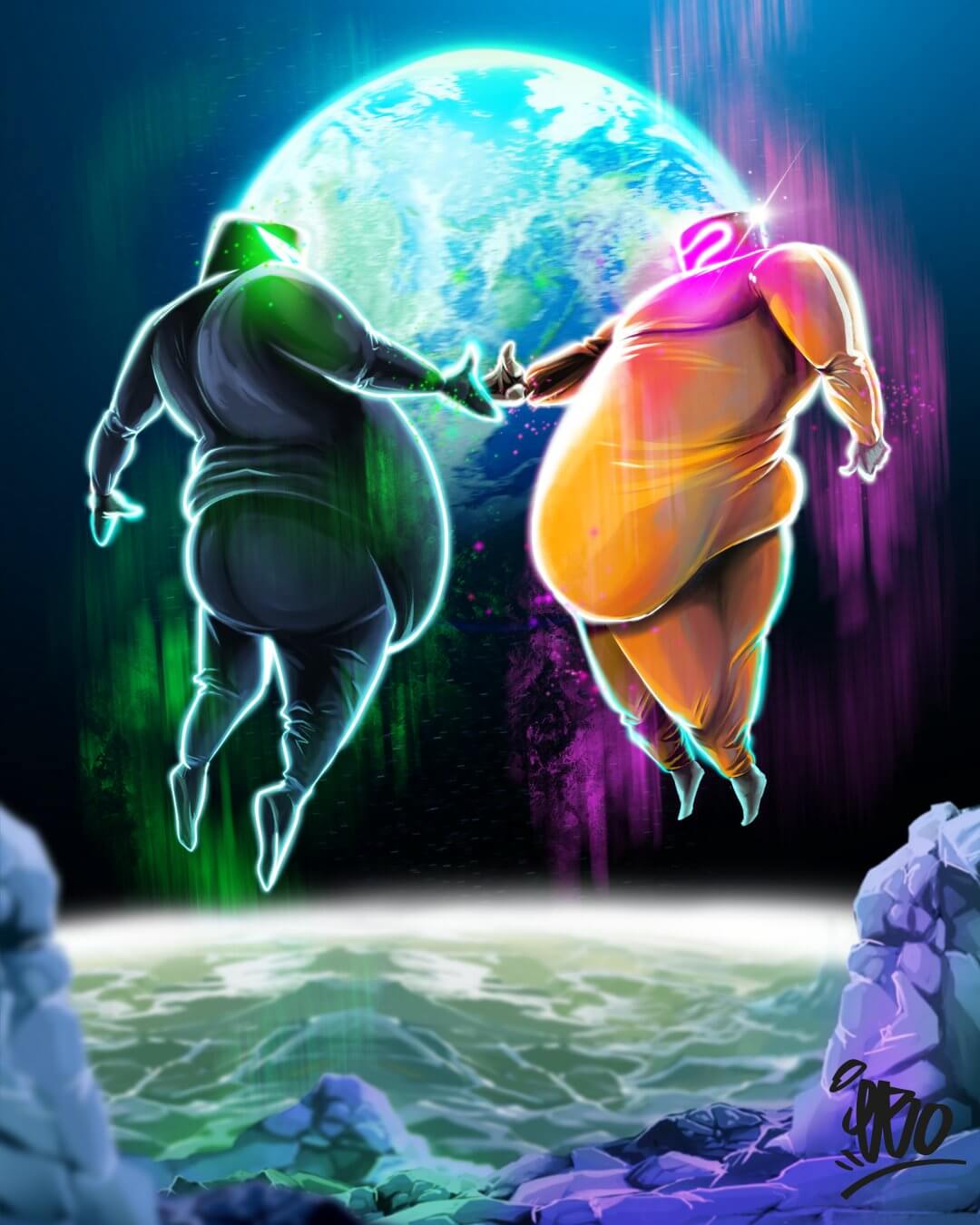 Hey all you wobble drop killaz. This is an appreciation post to the wobble masters Ganja White Night and the legendary Belgian artist, My Name is Ebo. Altogether, the trio have created a type of superhero, one that uses bass music like no other: Mr. Wobble.

Since their The One album drop, they have slowly been releasing a series of music videos to some of the songs.

Whereas their last album, Origins, sought to explain the root of Mr. Wobble’s power, this album shows some of Mr. Wobble’s adventures here in the present time. Each video gives us a piece of the story, and being the comic book geek that I am, I’ve been intrigued in him since his debut on the Mr. Wobble album.

If you caught their Halloween drive-in show, whether in person or at home via the livestream, you know that the bass duo have been in the lab cooking up a storm! Dropping IDs coupled with insane visuals; I was so happy to see the added visual installments to Mr. Wobble series.

Anyhow, if you missed it, the bass duo dropped the follow up video to “LFO Requiem” which left our hero, Mr. Wobble saving a child and leaving a damaged Dark Wobble in the process. We also recommend watching it here, to freshen up the memory.

Recently, like a few days ago, they uploaded the music video to “Dirty Girl,” the next visual installment in the Mr. Wobble series.

We find a type of black ops agent at the scene of where Mr. Wobble and Dark Wobble fought. She recovers an unconscious Dark Wobble and hauls ass to what may be a type of nuclear factory. There he is submerged into a tank and she proceeds to, for lack of a better term, go HAM on regenerating and healing Dark Wobble. His cracks mend, he begins to remember his battle with Mr. Wobble, and soon his green aura is back.

She looks on in amazement and pride as he ascends upwards, bursting through the factory ceiling and disappearing into the cloudy sky.

In true Ganja White Night style, the deep gurgles of bass are heard from beginning to end. Slowly building and bubbling over, until it drops you into a deep soundscape of wobbles and bass hooks. The added visual experience transforms the song from when I first listened to it, its like a whole new song. “Dirty Girl” truly lives up to its name, as this unknown character, with unknown motives, revives Mr. Wobbles evil counterpart. Who knows where he went now that he’s been revived.

The Belgian duo, Benjamin and Charlie, along with My Name is Ebo, gives us a new expression of electronic music. Combining it with a story line similar to that of a Marvel or DC comic is something I very much appreciate and I’m sure many others in the community do as well. For that, I am very thankful of them and all their hard work and I patiently (maybe) sit by and wait for the next installment in the tales of Mr. Wobble and Dark Wobble.

And if you’re looking for new music, keep up with our weekly Spotify Playlist, Fresh Hunts or follow us on Twitch. Whether it’s the newest drops from Ganja White Night, all your other favorite artists, some old school, or underground—we just want you to hear it.