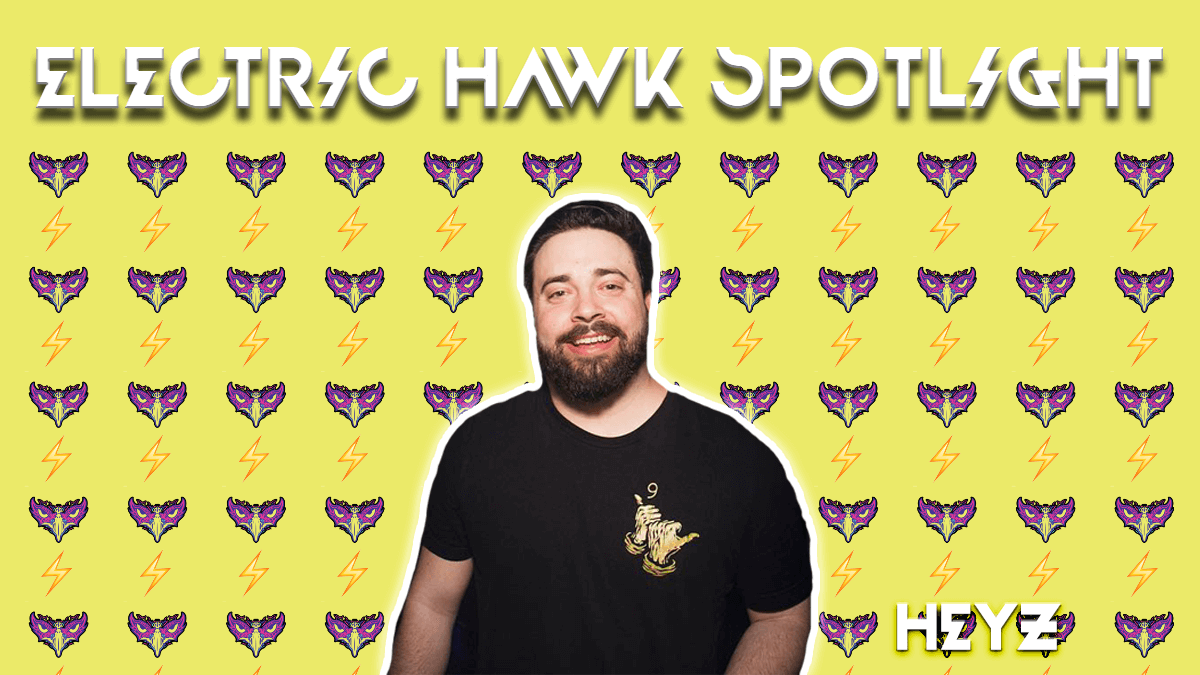 ARTIST SPOTLIGHT: HEYZ, A Man and His Dog

Mike Hayes aka HEYZ is always going to have a special place in my heart. Two years ago I was out for a run one day listening to deadmau5 on SoundCloud when I finished my playlist and the algorithm put on Mike’s track “Quietly“. It had that mau5trap sound, but I didn’t recognize the artist. So I pulled out my phone and checked.

I saw the song was on the foar moar vol 3 compilation album. It was by this artist HEYZ I had never heard of. I looked up the other song on his SoundCloud, “Odyssey” and I love that also. There was just this feeling that HEYZ had “it”. Both tracks became staples of mine. Eventually, I DM’d Mike on twitter and in full disclosure, he has become a good friend of mine ever since.

Following Mike’s career has been an interesting one. I’ve only seen him play once, at Electric Forest in 2018 on an RV. However, I listen to his music nearly every day. His sound has evolved so much since I first discovered it, and it is still changing. He has been supported by multiple major labels and his dog is even a celebrity. I’m excited to see where his path takes him. I also want to share where has already been with the rest of you. So I asked him for an interview and here we are.

Andre, Electric Hawk: Hey Mike, how are you?

A: Before we delve into the music, please tell us about your famous dog!

MH: Yess, getting the only important question out of the way first I see. My doggo’s name is Hutch and a video of him chillin’ in a green toboggan in my car went super-viral a few years ago. He has been #1 on Reddit a number of times and Snoop Dogg just posted about him recently. He’s got more Instagram followers than me so I’m just trying to get on his level, maybe one day. He’s a good boy.

A: You just dropped an official remix for Flux Pavilion, how has that gone?

MH: Yep, my remix of Flux’s track “Lion’s Cage” came out on Valentine’s Day! It’s gone super well. Sitting at 240,000 Spotify plays in under 3 weeks which I’m super grateful for. UKF Dubstep supported the release on their channel and overall I’m really happy with how it has been received and how I was able to flip the original track. It’s the first remix I have ever released. When I started producing I jumped straight into writing originals so it was fun to finally do a proper remix.

A: Did you listen to Flux Pavilion a lot before?

MH: Definitely. There were many nights spent in high school and college blasting tracks like “Gold Dust” and “I Can’t Stop”. I really love his album “Blow The Roof”. The first EDM festival I ever went to was Buku in New Orleans and his set was probably my favorite.

A: This Flux remix is a lot different from your earlier music. Your career started off with producing techno for mau5trap, right?

MH: Right. The start of my “career” pretty much coincided with the start of me producing music in general. I signed my first track to mau5trap only 3 months after I started producing, which was a big whirlwind. Deadmau5 is my favorite artist of all time so naturally, I gravitated towards a sound I thought could fit on his label. I wasn’t label chasing per se, I had no expectations really, but mau5trap liked my take on Techno so I stuck with that to start. But yeah, the Flux remix is more reflective of the current sound I’m going for…heavy bass backbone pared with captivating melodic elements and killer vocals.

A: How did you get in touch with mau5trap?

MH: I literally hunted down their A&R using LinkedIn, used emailchecker to confirm the email I guessed was correct, and shot them a cold email with a demo.

A: You played MMW at the mau5trap Treehouse Party and on the mau5trap takeover bus at electric forest 2018. What were your favorite moments from them?

MH: That Treehouse party was so sick. The room was packed and I played a 3 am. I like to bring a bit of humor to my sets or just act goofy and loose in general and I remember stealing a fan Rezz goggles and throwing them on for part of my set, that was fun. But just feeling how locked-in everyone was to my set and the energy of that room was amazing. The bus set at Electric Forest was great. Watching the space fill even though we were competing next to a bus I’m pretty sure Subtronics was throwing down on was awesome. ATTLAS and Rinzen jumped up there with me, pretty sure I slept in my car in the parking lot after.

A: I heard you lost a beer chugging contest at Electric Forest and now you have to name a song “Troll Daddy,” when is that coming out?

MH: How did you hear about that? Were you there or something!? Yeah, I was really confident in my beer chugging abilities back then and told a guy that he could name one of my records if I lost. He was obviously a seasoned vet at chugging beer and I got smacked. I haven’t forgotten about naming one of my records Troll Daddy which is ridiculous lol.

A: When did you start producing? And what were you doing beforehand?

MH: I started producing in 2017 on a whim. I’ve always been naturally gifted with music so I wanted to try my hand at producing electronic music, glad I did. Before music, I had my own digital marketing company and tech startup. We did digital marketing, social media management and strategy for musicians, labels, and promoters and transitioned that into creating software that automated certain functions of that whole process.

A: After mau5trap your music has definitely evolved. You released Darkest Little Friend and it’s definitely not techno. What brought about or inspired you to expand your production horizons?

MH: I’ve always loved Dubstep and Bass music, especially in live settings. I played a few local gigs where I barely played any techno and blasted the grimiest bass shit I could find instead of Techno and it was just so damn fun. I didn’t want to be constrained to playing only Techno in my sets in order to fit some sort of sonic brand identity I had going. So I started experimenting with heavier Midtempo and Dubstep type stuff. I don’t think I was being as true to myself as a producer when I was making just Techno, it was fun, but what I’m producing now feels much more like me.

A: You’ve also worked with Jauz’s label, Bite This, for your Human 404 EP. The tracks have great vocals. What kind of message were you trying to get across with these tracks?

MH: Yes, Bite This is great! With Human 404 I wanted to showcase a glimpse into my sound moving forward which focuses on creating “songs” instead of just “beats”; music that is memorable that gets stuck in your head. There is a lot of amazing bass music coming out right now but I think there is a bit of a void left to fill when it comes to combining dubstep and bass music with strong vocals and songwriting.

Finding a great writer and vocalist definitely adds a lot of time and effort to the production process, but I think it definitely pays off to go that extra mile to make lasting music. It’s hard for a listener to recall a beat they’ve heard but a catchy hook or chorus can stick with you forever.

A: I’ve seen Zeds Dead drop Castaway King live. Now Jauz drops a remix of your track every night on his tour. What’s it like to see your music supported by such legends?

MH: It’s fucking awesome to be honest. It’s definitely validating to see artists of their caliber support my music. Sam (Jauz) is a great dude and very supportive of me. It was amazing of him to ask for the stems for Clear so he could remix it and play it out on tour. I really hope he wants to release it because it crushes!

I’m a massive fan of Zeds Dead and they consistently play my music in deadbeats radio and throw Castaway King into their live sets. When it comes to those songs that “stick with you” and deliver the full package like I mentioned in the previous question, ZD is definitely an inspiration. Maybe you’ll see a Deadbeats release from me in the future.

A: Do you have anything coming up soon for us?

MH: I have a lot coming up, I have more music ready in the tank than I ever have. It’s just a matter of figuring out how I want to release it, but you’ll be hearing a lot more music from me in 2020 if everything with labels, etc moves quickly (sometimes the wait can be painful and out of my control haha). I have a remix coming out for Breathe Carolina soon and there might be a little collab with some dude people call Daddy Shark in the works.

A: Thanks so much for talking to us and we can’t wait to see what happens next in your career!