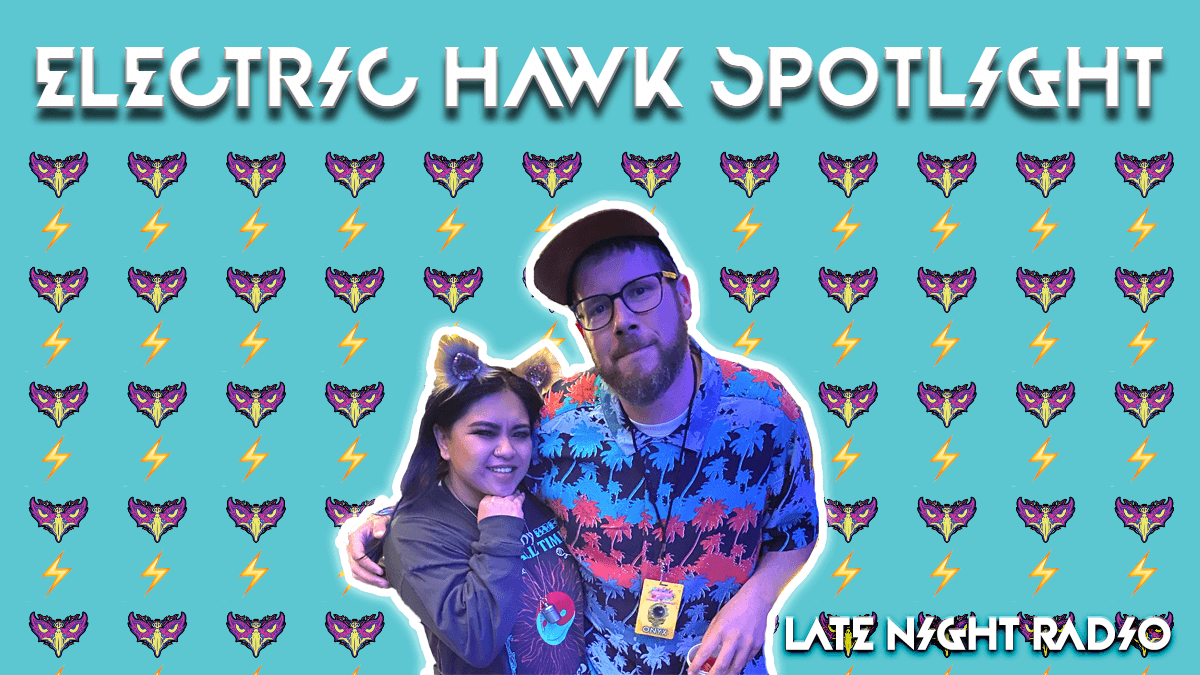 ARTIST SPOTLIGHT: Further into the Life of Late Night Radio

Walking into Saturday Gem & Jam, I was nervous as shit because I was about to meet one of my favorite artists, Late Night Radio. I had reviewed his life-changing album, Further into the Night, and listened to it on repeat for weeks. I was mad hype to learn more about him and his creative process.

Alex Medellin, famously known as Late Night Radio, and I were e-mailing earlier that week to set up this interview. From those e-mails alone, I could tell he was a very laidback dude. It made me even more excited to pick at his brain in person.

We met up outside of Gem & Jam‘s Onyx stage and Alex came with his buddy and “Tracy Slapman” turntablist, Brisco Jones. He showed up wearing a blue and red Hawaiian floral shirt and assured me I had nothing to be nervous about. It was no surprise that this Denver-based producer was super chill.

Arielle, Electric Hawk: Hey, Alex! Thanks for taking the time to answer my questions. So, I know you started producing music back in 2010, and would perform at ski resorts in Big Bear. Can you tell me how those experiences molded you to be the performer you are today?

Alex, Late Night Radio: I actually didn’t perform in Big Bear… I just did their web videos, commercials, and stuff… Basically music for all their online marketing. I made music for about 3 years without even thinking about even playing a show. Like, that was not the intent when I started making music. I actually moved to Colorado because I had a friend who could get me on stage. So, I pretty much moved from California to Colorado just to start a whole new life.

Arielle: Oh, cool. Where in California?

LNR: Big Bear! It’s Southern California about an hour and a half north of LA.

Arielle: Yeah! So you mentioned before the interview, that you had gotten asked a question that didn’t represent you well, so I’m hoping we can clarify it here. Back in an interview with Bullet Music in 2016, you said you never considered yourself a DJ and mostly a producer. But here you are playing on stage at a huge festival, and playing shows across the country. It’s been 4 years since that interview… Has your perception of yourself changed since then?

LNR: No, because the differences I see between producer and DJ is what you’re creating. Brisco’s an example of a great DJ who can mix really well, who can rock vinyl… and that’s not my skill set. But, I’m definitely a producer, musician, whatever—I used to not even like being called a DJ because I would get upset about not getting credit for being a producer, but now I see it as a different skill set that I don’t have.

Arielle: Really interesting, since you’re about to perform in a few minutes! So, I have a fun question for you… You’ve also described yourself as a homebody who doesn’t like to do jack shit. What’s your ideal night in?

LNR: My ideal night is sitting around and getting high, watching Forensic Files after fishing all day.

Arielle: Are you good at it?

Arielle: Oh wow, do you have photos? I want to see some fish photos!

LNR: Yeah, we have some fish photos! We knocked this one out… *Scrolls through his phone gallery to show pictures of fish.*

Arielle: There’s nothing like a picture of yourself holding a fish.

LNR: Well I’m always by myself so it’s just me… taking a picture of a fish. Boom!

Arielle: Those are BIG fish!

Arielle: You did it with your hands?!

LNR: *Laughs* No, that’s just me holding it with my hands after.

Arielle: I don’t know how to fish so… I have no idea. Moving away from fish and back onto music, you have lots of experience in making hip-hop beats such as your Vinyl Restoration projects. Do you think you’ll ever go in this direction stylistically in your live sets? And who are the most underrated beat-makers you know in hip-hop right now?

LNR: Oof. As far as live, yeah I’m starting my set out tonight with 5 Vinyl Restoration tracks. I kind of always try to sneak it in the set! I’m also doing some live Vinyl Restoration sets… They’re kind of a rarity, but I do some every year.

Arielle: Oooh, any in Brooklyn?

LNR: But as far as underrated hip hop producers… Shit, all of my friends.

LNR: Artifakts, Michal Menert, rxn… I don’t know, I think hip-hop has more underrated producers that are producing at a higher quality than any other genre. I mean, you can go on SoundCloud and find a song that has 150 plays, and a song that has 150,000 plays, and there’s really no difference in the quality of the production or what’s going on. In general, I feel like it’s an underrated genre and niche… The list is so long.

Arielle: Another thing you’ve said is the music that inspires you is always hair-raising. Further into the Night definitely did that for me. “Nostalgic” and “Changed” are my personal favorites from the album. Can you tell me a little more about what those tracks mean to you?

LNR: “Nostalgic” is a track that I started 4 years ago and got lost on a hard drive. And then it was just something that stuck with me ever since. I don’t know… it’s definitely one of my favorite tracks that I’ve ever made, honestly. “Nostalgic” is winding, emotional, it’s about struggle and overcoming and that triumph at the end that gets a big, happy resolution.

To me, that’s just life. It’s a lot of struggle and coming out the other side with a smile on your face. “Changed”… Same thing. Something about the downtempo hip-hop stuff feels right.

Arielle: “Changed” has to be my favorite song of yours, probably ever.

LNR: Yeah, that’s my favorite on the album.

Arielle: That’s awesome. Is there anything else you’d like to add about the album?

LNR: I don’t go too much into intent on my work because I’d really like people to be able to interpret songs and make them their own. Most of the songs I make, there’s a backstory or some kind of intent with it, but I like keeping that for myself and letting someone else make it their own. So, nothing to add. Just hopefully you enjoy!

Arielle: We really did. Thank you!