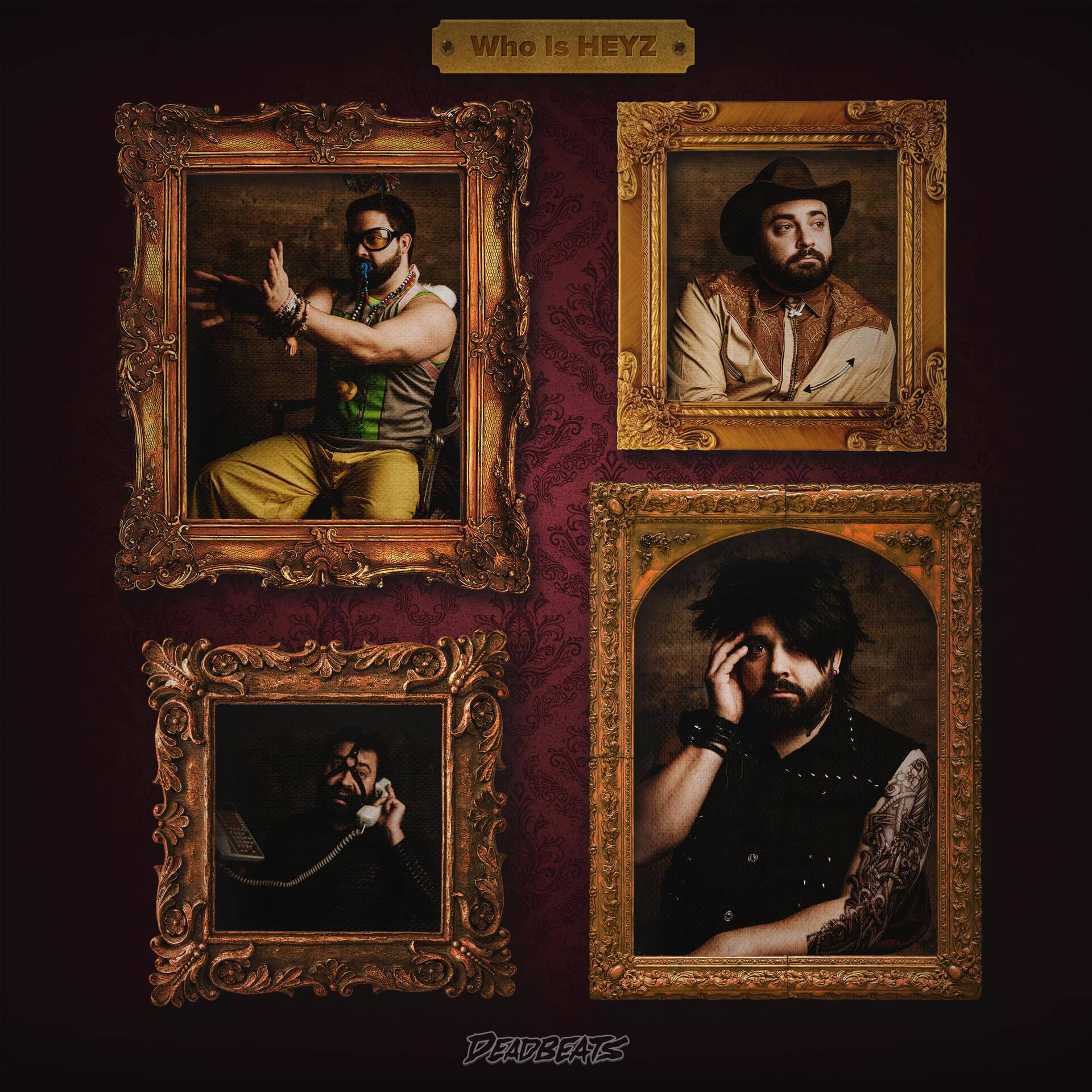 Discover ‘Who Is Heyz’ In New EP

A man of many talents, Mike Hayes, also known as Heyz, is making his mark with his debut EP Who Is Heyz out now on Deadbeats. Heyz is quickly up and coming in the electronic music realm, and we got to sit down with the man of the hour and find out who is Heyz.

Selbe Dittman, Electric Hawk: Hey there! So, how/when did you start making music? And how did you go about finding the sound that you have today?

Here’s the story. I was feeling music-deprived so I went to Guitar Center and bought a Spanish guitar and my plan was to get really really dope at it. I stayed up really late one night trying to blast off on this new guitar and it was kinda fun, but not super fun.

The next day I said “f*ck this” and returned it and bought some shitty monitors, a small midi keyboard, and Logic Pro X and started making beats. And I was making beats and was like hell yeah I’m kinda good at this shit. I love Deadmau5 so I was like, dope, I’ll make techno and then I sent a song to mau5trap on a whim and they signed the damn thing like 3 months after I started making music. Then I was like WHATTT, so I quit the startup I was a founder of to go ham on music. Now here we are…I’m making dubstep on Deadbeats lol.

So how I found the sound I have today goes back to when I would play techno shows and didn’t have as much fun as when I would thrash down some heavy bass music at local bars around the area. So I decided to make the switch from techno, to midtempo, to now dubstep. I think I carry this mix of “beauty and power” throughout my musical development meaning I really like to write beautiful, euphoric moments then smash listeners into heavy drops. It has been a fun journey.

I think I carry this mix of “beauty and power” throughout my musical development meaning I really like to write beautiful, euphoric moments then smash listeners into heavy drops. It has been a fun journey.

SD: Who/where do you draw your inspiration from?

I listen to a lot of genres including progressive house, trance, dubstep, classic rock, etc. so I really pull inspiration from a lot of sources and I try not to directly copy anything.

First off the Who Is Heyz EP.

“Anyway” kicks off the EP with incredibly high energy. This is the kind of track that you hear at the beginning of a set at a festival and absolutely lose your mind to. Its hefty bass drops paired with an electric vocal come together perfectly for this relentless track that will give you the energy that you didn’t even know you had within you.

SD: If you had to guess, what/who would be your most played song/artist this past year?

Uhhhhhhhhh. Either Spencer Brown’s remix of “Will We Remain” by Ilan Bluestone, “Tick Tock” by Mabel, Clean Bandit, and 24kGoldn (LOL it’s a catchy ass pop song that puts me in a good mood), or “High Vibrations” by LSDREAM (I know it just came out but I’ve had it on repeat, it’s a damn masterpiece).

SD: How does it feel to be releasing on Zeds Dead’s label, Deadbeats?

It feels fucking amazing tbh. I’ve always adored Zeds Dead, I would even try to copy their fashion and bought the exact same hat DC was wearing in one of their press pictures one year and wore it all the time. I also really love all the Deabeats artists and think I’m among some of the most talented producers in bass music…not saying I am….but I am saying they are. Harrison and Harley are incredible to work with as well, I really feel like family on Deadbeats.

Next on the Who Is Heyz EP.

“Fleeting” offers us dreamy vocals and atmospheric soundscapes before quickly dropping into a chopping first drop. Bass chops transform back into airy soundscape before dubstep breaks bring us into the second drop. If there’s any track that shows Heyz’s versatility, it’s this one.

SD: How does your new EP Who is HEYZ tell us who Heyz is? What can we learn about you from this EP?

First, I think it’s the best music I’ve ever made so that’s a good start when it comes to telling peeps who “HEYZ” is. It’s also the start of what will be a more consistent sound for me. I’m going to stick to the dubstep lane for a while and do that with Deadbeats. It also shows people that I’m a goofy idiot when people see me dressed up as an emo punk rocker, a cowboy, a gimp, and a 90s raver for the branding.

I wanted to call it “Who Is HEYZ” because I have this massive audience on TikTok for comedy, most of which don’t even know I’m a music producer. So people newly discovering me might be thinking “what exactly does this dude do?” Well damnit, I make music, I DJ, and I try to make people laugh. Above all, I want to make people’s day a bit brighter, whether that be through music, comedy, or both…that’s who “HEYZ” is.

Above all, I want to make people’s day a bit brighter, whether that be through music, comedy, or both…that’s who “HEYZ” is.

SD: What was the production process like for the “Who is HEYZ” EP? Do any of the tracks have any specific inspiration?

The production process was really loose for the “Who Is HEYZ” EP. I was just writing songs and having fun and didn’t pull really any specific inspiration besides for “Body Language”. I saw this TikTok with this really spooky, sexy song in it and was like “dagum that’s tight”, so I went with that vibe for “Body Language”.

The second single off the EP, “Body Language” changes the pace from the high energy on the rest of the EP. Its ominous, dark, and slow atmosphere sucks the listener in and takes us on a journey to the other side of Heyz’s universe.

SD: Was there any specific vibe you were going for for this EP?

Big moments and big energy! “Anyway”, “Fleeting”, “Wildheart”, and “Just Friends” have this explosive nature about them and a happy, euphoric, but heavy vibe. “Body Language” is definitely the odd track on the EP but I think it was good to include it for a little break in the energy. I also want to point out how much I love the breakdown after the first drop-in “Fleeting”. It’s such a cool trancy, “hands in the sky”, “I’m Armin Van Buuren” moment with that big arp and bells. Then, I whack you in the face with that filthy second drop and that’s exactly what I love doing. Make you wanna cry one second and make you wanna poop urself the next.

SD: How has your success on TikTok influenced your music career?

It’s actually helped it a lot. It has helped me really solidify the “HEYZ” brand and that is literally just me being my goofy self. It validated that as the right choice for what I put out there on the internet. TikTok has also heightened my profile because I have this big outlet with 300,000 followers that I can progress my story with. It also shows I’m a bit multifaceted and can be a bit “Dillon Francis-esque” with the project.

“Wildheart” slowly builds tension before giving way to warbly soundscapes and heavy basslines. It’s a beautiful cacophony of bass mixed with dreamy elements, following the theme of the rest of the album. It’s the perfect segway song between dark and ominous “Body Language” and emotional “Just Friends”.

SD: You said that you love your brand being “you being your goofy self” on TikTok. Do you feel like your music producer persona and TikTok persona are different from each other or do those lines blur?

So since my Tiktok blew up so quickly, and for a reason other than music, it definitely was separated. But, with this EP and the funny character branding, I’m actively trying to blur those lines. It just takes time. Tiktok is really finicky with kinda backing you into a corner and wanting you to do more and more of the content you went viral for, but I’m certainly trying to branch out. It would be amazing if I could be as known for my music as I am for my comedy on Tiktok, that’s something I’m trying to figure out.

SD: Outside of producing music, what’s a favorite hobby of yours?

I really like cooking and BBQing meats. I love drinking beer while doing the aforementioned activity.

“Just Friends” was the first track released by Heyz on Deadbeats and it’s easy to say that it set the precedent for the rest of his releases. Featuring vocals from Taylor Ravenna, this track tells the story of navigating feelings of wanting something more with a friend. Combined with Heyz’s hard bass, this pair perfectly captures the emotion behind the lyrics.

Some really sick remixes, more original music, and BY THE LOOKS OF THINGS, more shows and festivals than ever 😉 oh yeah and a lot more dumb Tiktoks lol

And we love Heyz! But for real, if big, emotive, fun, explosive tracks are your thing, Who is Heyz was made for you.

Listen to Who is Heyz here:

Looking for new music? Keep up with our weekly Spotify Playlist, Fresh Hunts. Updated every Friday with all the latest releases. Whether it’s the newest drops from Heyz, all your favorite artists, some old-school, or underground – we just want you to hear it.