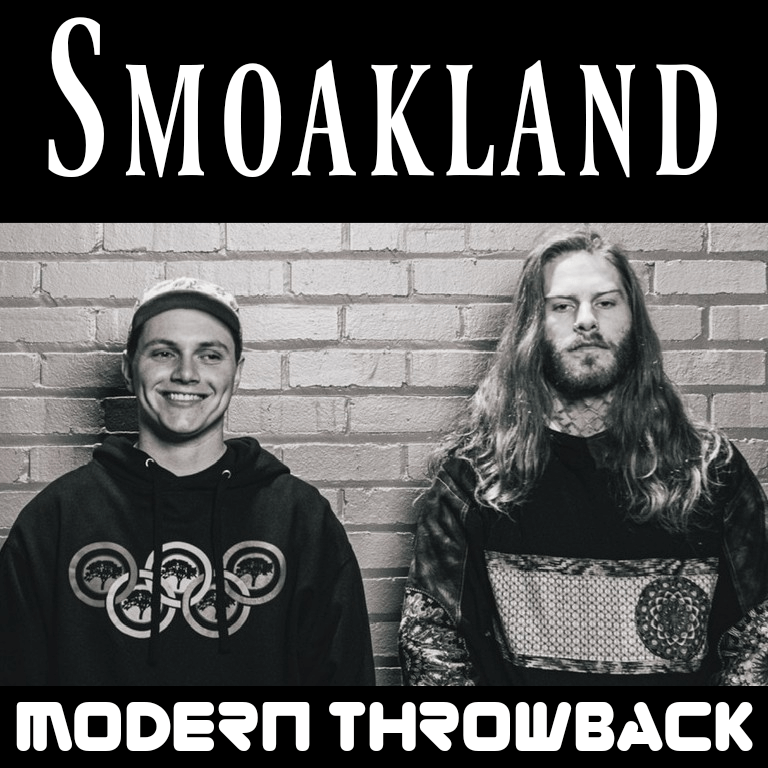 By Kevin JeffriesApril 6, 2020No Comments

Word on the street is that Smoakland is dem boiz. Who else in the game right now could toss out drum and bass remixes of Brandy b2b Hadouken? Whom else have enough mixes out to keep our ears happy on a ill-advised road trip to try every peach cobbler across Georgia? Whomst else can claim responsibility for SEVERAL self inflicted booty tossing black eyes? NOBODY. (long story short, ‘blunted‘ is that chune bröther). If you’re not familiar with Smoakland, the world literally stopped just so you have no excuse to not get into your underwear, pack a bowl (of cereal), and follow us down into the wormhole of sound that is Modern Throwback.

Literally pressed play and couldn’t figure out if it was our third eyes or brown eyes that was opening. A ‘Is everybody in’ type beat right out the gate. This jawn opened like sun salutation and with the QUICKNESS dropped the floor out. Suddenly we found ourselves named Carlie-Anne-larkyn, free falling through bass still in a Warrior 3. Namaste.

This album doesn’t give any time to put on the proper safety equipment. “Set You Free” got that groove that would make you rip your seatbelt out your car. Barreling down the freeway at a smooth 85mph throwing cheeks like pizza dough music with your kids in the backseat. A “you’re 12 now, grab the wheel while mommy puts in this work” kinda track. How many computers did these boys go through making this one? How many DAW’s caught flames trying to contain this aural instruction manual on how to properly turn your wrists inward to achieve maximum torque in your hips?

We stan SuperAve over here at Electric Hawk HQ. His guest mix over at FUXWITHIT brings the girlies back after your homie who don’t shower ended up scaring them away with “CODEX VI.” Not gonna lie, thought this was gonna be a “Lipgloss” remix when it opened with that clap. Pants off. Jergens at optimal angle to avoid splash back. No offense to Lil Mama but what ended up coming out of our speakers was WAY better. “You’re no good for me, I don’t need nobody” is dummy inspiring. We know nobody working right now but this song make us wanna get a little birdie business suit and start hustling. It’s focus on that bird seed season.

BARS only. We miss places and this song doesn’t help. Couldn’t tell you how many times we’ve woken up in our nest in an adult man sized cold sweat after dreaming about experiencing live music again. Like Smoakland and NewGent should be on a stage creating space for us and 1500 of our closest and most dear homies to dance and celebrate life. Sh*t’s wack. Man if scientists don’t figure it out we’re coming for rona’s ass, on God. This song is too hype to be bumped though the communal Beats pill that all of Electric Hawk listens to music around. 6 feet apart of course.

If you’re not familiar with the original “Four 15’s“, here’s an intermission, it’s okay this write up will be right here. While they’re getting caught up I have a legit question, like… what IS dry ice? Like I know it’s CO2 or whatever but how do you make that a… oh sh*t nvm they’re back. Okay now that everyone is on the same page on why this VIP is about to be slutty as hell. Let’s get back to it. Who’s tryna go in half on a kid? Not to be crass but this a stroke to end the world type beat. A “daddy why did you name me Smoakland Forever” kinda flow. This song could’ve only been dropped during a pandemic because when this one finally gets played out it’s game over. You thought your local venues floors were sticky BEFORE. Whew.

“Drum and Bass is fast” – Lorin Ashton, President of EDM. This one is for the intellectuals. Big brain beats. Who are we kidding, drum and bass turns us from relatable, and dare we say cute, domesticated hawks into wild fucking animals. Rude boi music. It’s a known fact that everyone is an interpretive dance major when DNB comes on. Send this track to your crush, your estranged father, and your favorite Food Network host with no explanation. Make a four course meal from scratch to this one. Run the Boston Marathon alone and in the middle of the night to this one. Solve Yang–Mills existence and mass gap and tell nobody to this one. DRUM AND BASS IS FAST.

This one sounds misty? Like that episode of Courage the Cowardly dog with The Slab™. Sidenote: That was a kids show like for children of child age? Who green lighted that episode? We’re still messed up over it and it’s been LITERALLY 20 years since it was released. Anyway, “Confusion Hill” is mad ooky spooky. Haunted house music. Corn maze chunes. Going to a department store by yourself because your ex-girlfriend said you’re an adult and need to own pants without rips in the knees before she takes you back dharma. You know those songs that come on and just the weight of the bass forces you closer to the ground? That part.

Smoakland really deserves an award for how many tracks they have out that have fractured the hips of skinny dudes who tried to channel Step Up 2: The Streets and dance on a girl twerking like rent was due last week. Rumor has it they used to have a P.O. Box to send ruined pants to but shut it down when it was flooded with medical bills. And that extra Zeplinn spice?This is a certified banger. When we’re allowed to gather again, they better play both drops. I know DJs get bored and want to throw in as many songs as they can, but bring back rinsing both drops. Especially when the songs are MONSTEROUS. Tracks like this one make you want to google how to build a spaceship from scratch. Like if human adult people can create something so creaming dreamy, nothing is impossible.

I Will Be Feat. Windkisser

It’s not fair that every. single. track. is fire! Like it’s mad heartwarming that this album from start to finish makes us want to want to start a small instagram boutique, leave our man, and move across the country to start climbing clout Everest. American dream behavior. This song sounds like it should be played in a fancy strip club? Like it’s classy and elegant, but also we’ve been in a split the entire 3 and a half minutes it’s been on? Wild how that works.

Wait final track already? We don’t know who we are anymore after this LP. Do roses smells as sweet? Does flume still eat ass? Does cereal still slap the hardest at 3am? Gonna start categorizing time into BMT and AMT for real. What a way to end an album of classics. This one is meditative. Transformative. A song to hold yourself to and getting carried away into the sound as you come up too hard. The sauce that the Smoakland boiz and Molokai cooked up here has LAYERS. We feel smarter, sexier, and wiser as this track unfolds. An exhale after a long journey of ass throwing honkers.

There’s nothing else to say other than Smoakland might be GOATs after this one. We danced, cried, moved to the woods, started a e-commerce based vegan bakery, and learned to love again in the run time of Modern Throwback. Smoakland made the cure for loneliness in this moment of separation and we’ve decided to Stan permanently and forever. Modern Throwback is a icon, a legend and it IS the moment. Support these kings and stream/buy below:

And if you’re looking for a solid playlist to follow, keep up with our weekly Spotify Playlist, Fresh Hunts. Whether it’s the newest drops from Smoakland and all your other favorite artists, some old school, or underground—we just want you to hear it.