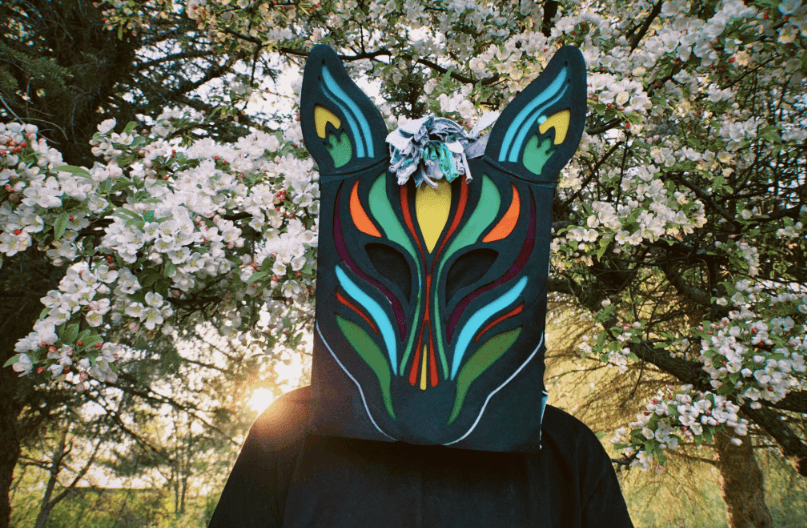 The wait is finally over, and we are being blessed with new Slow Magic tomorrow! Known for consistently delivering otherworldly and luscious sounds, Slow Magic is back with his Closer 2 U EP. We got the chance to sit down and chat with Slow Magic about the new EP, life since quarantine, and more!

Corie Odom, Electric Hawk: Thank you for taking the time to sit down and talk with us. We are super stoked to have you. So, to anyone that might be unfamiliar with your sound how would you describe Slow Magic?

Slow Magic: That’s a good question. I think that I would start by saying it’s electronic, haha. Then really, from there, I would say that it’s up to the listener to define any genres. Yeah, I don’t know, I think I try to make playful, chill, sometimes intense electronic music.

CO: What keeps you so dedicated to remaining anonymous?

CO: So, You have a new EP Closer 2 U dropping August 19th. Tell us a little about that, what inspired it?

Slow Magic: It’s kind of part of an ongoing series that will eventually be an album (EEP!) I guess, like everyone this year has been interesting, and I’ve been working on this project for a while, actually, and about two years ago the name “It’s the end of the world, but it’s okay” for this project, my wife (Dream Angel) and I came up with that. It’s kind of like become more real than ever this year, almost too real. The theme of the album was that even when things are really tough, and it feels like it’s the end of the world, somehow we’ll get through it.

CO: The first single “Somewhere” featuring Woven In Hiatus dropped about a month ago, why did you pick this track to be the first glimpse of the EP?

Slow Magic: I think that song was definitely a standout for the four tracks that are on this EP. I don’t know; I think it felt like a good summary of the sound, and something that maybe people would like to hear first.

CO: Recently the single and title track “Closer 2 U” with Manila Killa was released, so tell us, which came first the EP title or the track title?

Slow Magic: I think it was the title for the track. Like the lyrics in there, I think it just came naturally, with the simple lyrics and kind of the idea came from the song of like it fits with this year as well. I know a lot of people are separated by the circumstances this year, and when I was working on that track, it felt like the emotions of missing someone and not being able to be there next to them just kind of resonated through the sound. Eventually, I think it only made sense as the title for the EP, because I think the theme for this part of the album is desiring to be closer to people that you can’t right now.

CO: Your EP has a couple of features on it, but who is an artist you consistently love to collaborate with?

Slow Magic: Well, if we are looking at this EP, I was able to work with Manila Killa, who I worked with a little bit before, but we’ve never been able to release something, so really excited to get that out. Also, working with Woven In Hiatus and Shallou, who helped produce “Somewhere,” that was cool. I’m always enjoying collaborating with people that are more behind the scenes.

Like on my mask, for example, I have a talented group of people that develop those over the years. I have to drop their names Jonas Goonface designed the original mask, and over the years the next mask was made by Levi Wall. Then, the most recent was created by Joey Verbeke and Yagmur Uyanik. All my projects I’ve worked with my wife, Dream Angel, who helps with the visual aspect, and the music as well. Those are just behind the scenes collaborators I’m always working with.

CO: Who is someone you’d really like to collaborate with?

Slow Magic: This is a tough question that I’d have to think about. So Below is someone I’d love to make a song with, I hope that would happen sometime. There are so many good artists out there, I really like Gold Panda, and I’ll say Burial, I don’t know if that could ever happen, but it’s good to dream.

CO: You kind of touched base on this earlier, when you said this was a part of an upcoming album, but was Closer 2 U always a plan for 2020? Or did it come about with all this extra quarantine time?

Slow Magic: It’s been in the works for a while, the music that ended up being in this package. I think that like a lot of people this year shook up some plans. The way that it’s being released is different, but the music was planned for this year for a pretty long time.

CO: On release days, whether it be single, EP, or album how do you typically spend those days?

Slow Magic: It’s probably the most boring answer that I can give, probably just stressing and looking at my phone and making sure I post everything. Hoping it all goes well.

CO: Just out of curiosity, who were some of your influences that made you want to get into the music industry?

Slow Magic: When I first started Slow Magic there were three artists that I really felt were doing cool, new things that I wanted to fit with. Gold Panda, who I mentioned earlier, Star Slinger, and Baths. I’ve been able to play shows, and at least meet all of them so that’s pretty cool.

CO: If you were to look right now, who would be your top five most played artists on Spotify.

Slow Magic: ooh nice. I would say number one would definitely be The Radio Dept. Number two would be a playlist, which is called Mellow Classics (super fire recommendation, go listen to it) it’s just kind of chill 70’s music. That’s not really an artist, but I’m going to go with that. I’d say Lady and Young Lean would be up there a doubleheader, then DJ Seinfeld, and Clams Casino. I listen to a lot of different types of music, so some of it is not electronic, some is.

CO: With all the extra time this year has given you, how have you been spending it?

Slow Magic: Stressing. Honestly, it’s crazy how time has been this year. The whole first few months of quarantine were so slow, but the last few months have just been disappearing. My wife and I have just been trying to stay healthy and sane. Taking a lot of walks and getting outside as much as we can. I’ve also spent a lot of time just connecting with more fans and building a little army, like imaginary friends. I’ve been having a good time since we’re not able to go to shows, connecting with more people online, feeling some social aspect of just hanging out has been good.

CO: Finally, with everything music related being on hold right now, what are some things you’re missing the most?

Slow Magic: I’d say traveling and playing shows all over the world. I think I always knew that was something I enjoyed, but I’m sure everyone feels it too, just not being able to go to shows is so hard. I can’t wait until we can get back. Everyone wear a mask!

Slow Magic’s new EP drops tomorrow, but until then stream the singles to hold you over!

And if you’re looking for a solid playlist to follow, keep up with our weekly Spotify Playlist, Fresh Hunts. Whether it’s the newest drops from Slow Magic all your other favorite artists, some old school, or underground—we just want you to hear it.