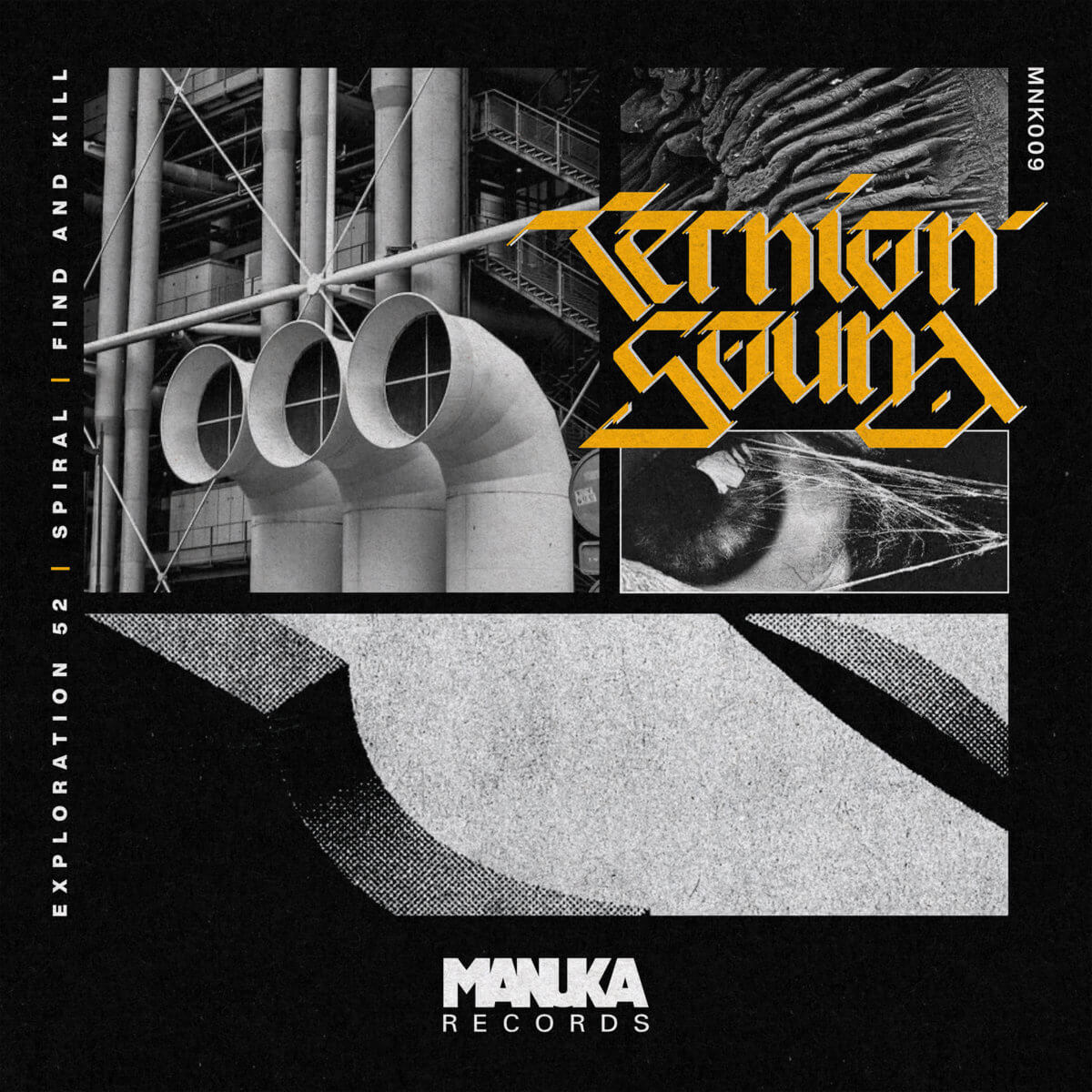 By Corie OdomSeptember 16, 2020No Comments

Ternion Sound showcases their versatility and production skillsets in new Exploration EP. I got the pleasure of asking this collaborative trio powerhouse a few questions about the EP, their dynamic, and lives outside of music.

Corie Odom, Electric Hawk: For anyone that may be unfamiliar, how would you describe Ternion Sound?

Jack, Ternion Sound: We’re a trio of producers that makes and curates a variety of bass oriented electronic music with a focus on synthesizing modern and oldskool techniques.

CO: How have you guys maintained such a solid dynamic between the three of you over the past few years?

Jack: Consistent communication and making sure that each of us understands and is understood. Also, a system of creating, iterating and finalizing new pieces of music and projects involving all three of us, brainstorming and deciding what fits and what doesn’t.

We have a “Doneness and Dopeness” Google Doc that lists all of our unfinished projects, how completed they are, and how worth completing they are. That keeps us pretty organized. All three of us start tracks on our own, but somewhere between 40%-80% completion, the other two will come in and either do more production or give advice and direction.

Andrew, Ternion Sound: Looking at the horizon rather than the moment is important. Being an artist is a challenging brain game. You have to leave space for each other. We had a moment yesterday where we had to stop the meeting for a second because two of us were on a completely different page by accident.

CO: I know you all first played together during an impromptu B2B at Infrasound 2016, but walk me through how you get there to the formation of Ternion Sound?

Jack: We just felt a synergy doing that tag set. Our DJing styles fit together nicely, and we don’t get in each other’s way or get bored with each other’s mixes while playing together. Originally we were going to continue making Riddim/Brostep style, but we were all quite burnt out on it and saw an opportunity to explore new musical ideas by totally switching it up.

Aric, Ternion Sound: When I first started attending electronic shows in 2011, Andrew and Jack were some of the first DJs I saw live. I was most certainly a fan. Andrew ran a music producer club from a private college in downtown Minneapolis, where he was attending school. I also decided to attend that school to follow Andrew’s path. Fast forward to a few years later, and we are all in the same group!

CO: When you get into the studio, do each of you have a specific job/area of expertise, or is it more of a go with the flow situation?

Jack: We are all full producers in our own right. Some Ternion tracks are mostly completed by one of us. We each have our own production style and thing to add when we all work together in the studio. We also use three different DAWs, so often, its best to work separately but get direction from the others.

Aric: We definitely each have areas of expertise. I find myself doing a lot of melody writing, drum programming, and idea-generating. Jack is the sample creator/sound design master. Andrew is the best producer, and thankfully the best at finishing tracks and mixing/mastering. Also, its interesting to see how our production styles grow/change over time.

Andrew: Well DANG, Aric <3 But yeah, I end up being “the tune finisher” when a song needs an extra last kick.

The boys embark on a new journey with their Exploration EP.

The EP features three tracks that take us down a new path of 130bpm, while the signature Ternion style still lays a solid foundation.

CO: Your latest release, Exploration EP, features three unique tracks that kind of stray from your typical sound. Do you have a favorite of the three?

Jack: Personal favorite is “Spiral.” I think it’s the most leftfield and interesting. Also, I didn’t work on it personally, so that automatically makes it more interesting. “Find and Kill” started as a Jungle idea I had and passed it to Andrew to finish because I had listened to the original loop so many times I lost inspiration.

Aric: “Spiral,” it’s the best combination of our signature sounds and influences.

Andrew: I’m very proud of this EP. “Spiral” is very successful at blending Ternion Sound with 130 vibes. But, I think “Exploration 52” I might like a little more as it was proof of concept on ideas I have been trying to get good at for a while now.

CO: Do each of you have a specific genre you prefer to produce?

Jack: I’ve been getting into Jungle and 60-70’s Dub music lately. I’m trying to move away from focusing centrally on bass patch sound and start focusing on exploring percussive grooves and creating soundscapes and textures more.

Aric: 140 is most rewarding for me personally. I used to make a lot of Hip-Hop beats before I was producing Dubstep. Lately, my focus has been trying to get my track mixdowns to sound as clean as possible.

Andrew: I listen to the 1970s and 80’s alt-rock, folk, and funk. I love the stacks of harmonies and interesting chord progressions on top of the raw recording techniques you can often hear in these tracks.

CO: Is there anything in particular that inspired the Exploration EP?

Jack: We’ve all been listening to a lot of 130 tempo music for some time now. It’s always refreshing to get outside of the habits you get stuck in as a producer. One of the goals of Ternion is to draw inspiration from electronic genres less represented in the US, so Garage, Jungle, and more “leftfield” kind of dance was crucial for this EP.

Andrew: Manuka Records, Swamp81, Shall Not Fade, and old rave VHS’s from the 90’s.

CO: What prompted the collaboration with the Manuka Label for this release?

Aric: We’ve been chatting quite a bit with Hypho (label head). He’s a guy that’s really pushing himself and his label at the moment, so we were definitely interested in releasing on Manuka. Plus, we really dig the music they’ve been releasing!

Andrew: They got a hustle and a good sound 😀

Just like everyone else, this year has been a little different for Ternion Sound.

CO: I know Bandcamp has become essential to artists, especially with how things are currently in the music scene. Have you noticed a boost in traffic on your Bandcamp since the pandemic started?

Jack: Yeah, especially with their special days where artists get cut into more profits. The platform has had expanded awareness with a population of people who want to support their favorite artists directly.

Aric: We’ve certainly felt the effect of the increased Bandcamp traffic. It’s fantastic for artists who benefit directly from music sales. Also, listeners (myself included) are getting treated with tons of new music releases!

Andrew: I LOVE BANDCAMP! We also are able to sell our merch there and they make it all pretty easy to navigate.

Make sure you shoot the boys a follow on both Bandcamp and Patreon to support them directly. Patreon exclusive tracks drop every month.

CO: Once life goes back to normal, what is one festival or venue you’re most looking forward to playing?

Jack: The only one that really hurt for me was missing Outlook this year. Shambhala was another one I was excited about, but I’ve never been, so I don’t know what I’m missing.

Aric: Red Rocks. It’s been on the bucket-list of venues ever since I found out about it.

Andrew: Red Rocks is going to be a moment for sure. I’m really missing our EU/UK friends too 🙁

CO: On a positive note, what good has 2020 brought to Ternion Sound?

Jack: I’ve taken most of the year to take care of my physical and mental health. The break from touring was actually much needed.

Aric: In the past, I’ve found myself focusing more on the DJing/live performance side of music, instead of learning more about production. In 2020, I’ve been able to focus on a balance between both of those elements.

Andrew: I think all artists had some sort of mental breakdown in the last couple of months, and I hope they reach out and sort what needs support and what needs getting rid of in their lives. We’ve been in a privileged position. We’re able to find ways to continue to survive right now and take breaks if needed. I feel for those who haven’t had that chance or are more drastically affected.

We love the Exploration EP for showing us all the different sides Ternion Sound has to offer. A group with their synergy, talent, and knowledge is lethal, and we can’t wait to see what they have in store for us next.

The Exploration EP is now out on all platforms, stream it below!

If you’re looking for more new music? Keep up with our weekly Spotify playlist, Fresh Hunts. Whether it’s new Ternion Sound, all your other favorite artists, some old-school, or underground…we just want you to hear it.