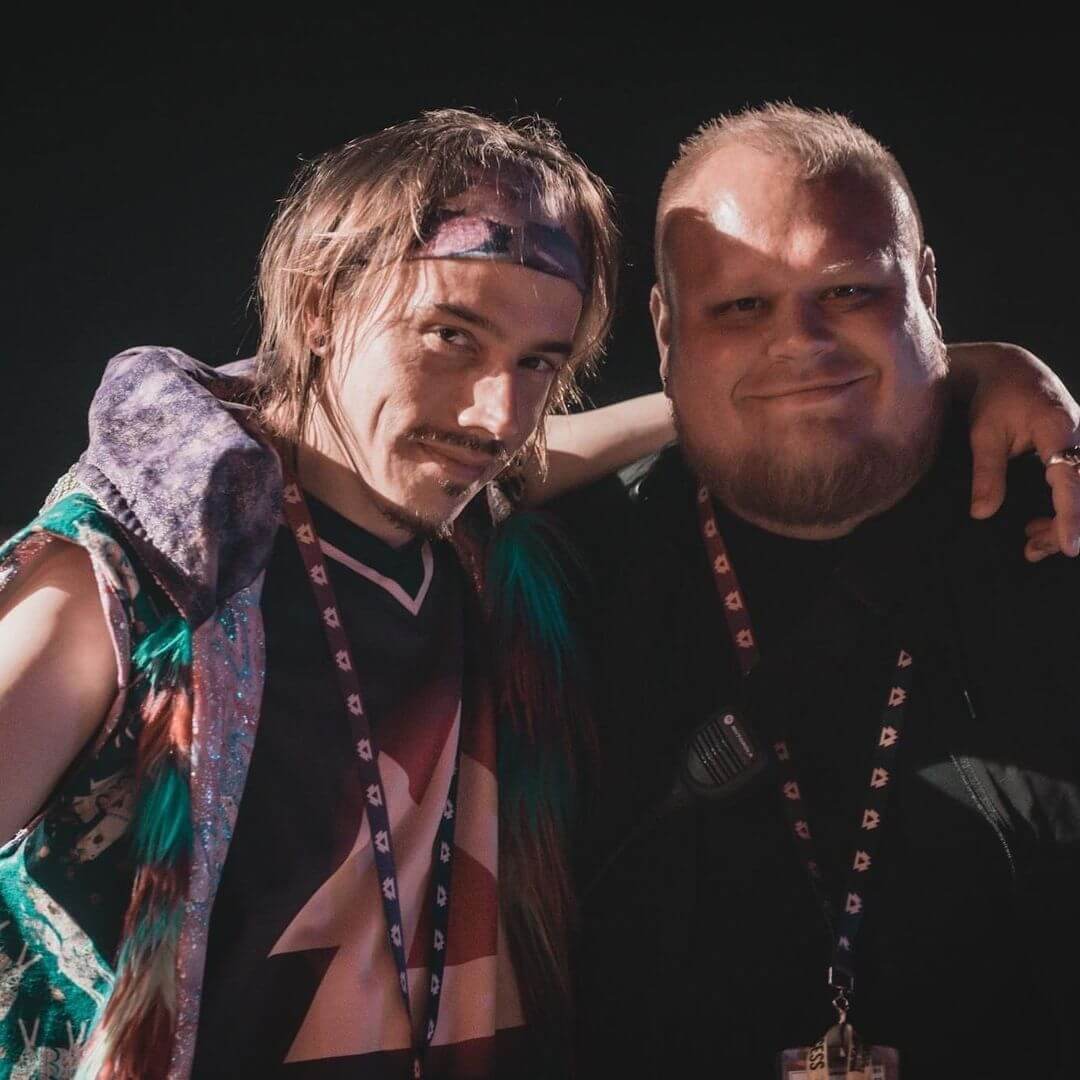 Behind the scenes of the renowned Wakaan, SSKWAN label, and Wakaan Music Festival, is RA Loper, or more commonly referred to as Loper. A man of many talents and a copious amount of experience, his years of work in the music industry have journeyed him through the realm of pop-punk music, electronic music, running a record label, building a festival, and now, creating his own management company. With the new year in full swing and his new venture in the limelight, we sat down and talked to Loper about anything and everything that makes Loper, Loper.

Like a lot of people in the music industry, Loper got his start in music as a musician. When that didn’t last long, Loper found himself looking at other opportunities.

“I realized I was a bad musician and started managing said band I was a part of. Opportunities really started presenting themselves and I worked in the office of Scott Booker, the manager of The Flaming Lips. From there, I learned how the music industry works and that there is money in this career. I had no interest in the electronic scene specifically. But, I had a friend who was a local DJ and needed someone to help him facilitate offers and bookings.”

Then, one day at Excision’s show in Tulsa, Oklahoma, Loper met Martin, better known as the Liquid Stranger.

Loper reigns from Oklahoma City, OK and Martin is originally from Varburg, Sweden. There really couldn’t be two people more different than Martin and Loper, but those differences have led to a blossoming friendship and a very fruitful professional relationship.

“Martin had been told by my client Lucky Date that I was this big gnarly dude. Keep in mind Martin has 10+ degrees in martial arts so he is quite accomplished, but I met him outside of the venue in the back by the bus. I introduced myself and he looked me and up and down and said “I could take you.” And then proceeded to get on the bus. I looked at my client who introduced us, incredibly confused, and muttered ‘well that went well,’ and proceeded into the green room. Later Martin came in and sat down and we laughed about the introduction telling me he was joking.

A couple of months passed and Martin contacted me and we started talking regularly for about 9-10 months before Martin finally said I should manage him. And, I think us having the long time period of just talking and getting to know each other and becoming friends really set the foundation for our professional relationship. When you’re friends with someone first,  it makes it easier for you to go above and beyond for them as there is an emotional attachment, possibly more so than just a client because of that personal tie. Martin is a balance of both and we see eye-to-eye on a lot of things and it just works. I think my life would be really weird if Martin hadn’t come into it.”

Wakaan has quickly become one of the most sought-after labels for artists to release with. The label was originally formed as a space for Liquid Stranger to release his music. It has since transformed into a place where new talent in the electronic scene can learn, thrive, and reflect on their career.

“[Running a label like Wakaan], every day is a process. Trying to propel the label and maintain the culture and art of it is hard. It started out as a way for Martin to release his own music but has developed into so much more than that. We try to educate and help artists grow within their career path. Combining mainstream tactics to pave success while educating and keeping the integrity of the music and the art and make them the best artist and person that they can be.”

Everyday life presents us with new lessons. Whether it be personal or professional, there is something you can take from each day as a learning lesson.

“Every day I learn something new. Every single day is an opportunity to better yourself and therefore an opportunity to better those around you. The music industry is hard and full of a lot of crappy people. Sometimes we have to make tough decisions. How you handle hard decisions is a testament of who you are at your core. I’ve had to make a lot of hard decisions about some things I never thought I would have to. The biggest lesson I learned early on is that it doesn’t do anyone any good to not be brutally honest. There’s a way to be straight-forward and honest and still do that with the utmost integrity.

Artists are often surrounded by ‘yes’ people. Artists need to be around people who will tell them the truth – good or bad. You need to be able to tell hard truths and that’s often misunderstood or taken incorrectly. You need to be able to communicate the things that need to be done to be better. And the moment that doesn’t happen and you’re not honest about that and stop communicating, at that point, it’s probably the beginning of the end. I try every day to be as honest as possible, even when it hurts.”

“How you handle hard decisions is a testament of who you are at your core.”

Working in the music industry ultimately means creating experiences and feelings for people to immerse themselves in. Sometimes, those experiences run so deep that you have to pinch yourself to believe. For Loper, one of the biggest “pinch me” moments came from the first-ever Wakaan Music Festival held in October 2019.

“At the end of it, I was just a soppy mess. I was so emotional. We didn’t know if this was going to work. Martin and I were flying to Australia when tickets went on sale and we were hoping to sell 100 tickets. So, when the tickets went up, I couldn’t see the orders coming in because I was on a plane. I think we sold 4,000+ tickets that day.

And then to fast forward and see it in real-time and be received by the fans and do as well as it did was incredible! Martin and I were just crying during the festival because we couldn’t believe it. At one point during the weekend, I was on Martin’s loft balcony while Subtronics was on stage and just couldn’t believe it. I remember looking over the site, the stage, the people, being so mesmerized that people literally crossed oceans, states lines and had given their hard-earned money to come to see this thing that we had created and that was just a total head f*ck. On the plane home, I was still just weeping over this thing we just created and threw.”

Trends in the music industry

The music industry is constantly changing in terms of music and culture. One thing Loper wants to see changed within the industry is how we, the fans, interact with each other and the artists. The scene is in serious need of more equality, more grace, and more accountability.

“Right now we are in a heavy, heavy cancel culture. People are tearing each other down and spewing nasty and sometimes even false things left and right. People need to take a hard look at what they’re putting out into the world. Everyone, including artists, needs to remember that your words carry weight. Always take a second look at what you say and do prior. I’m all for everyone having their own opinions, but that doesn’t mean because someone doesn’t see eye to eye with you and share your sentiment that they should be condemned or worse – canceled. If you can’t see anything nice, then don’t say it at all. We need to stop trying to tear people down and have some common courtesy.”

At the beginning of 2021, Loper announced his solely owned management company, Optimystic Group. Starting your own entity is never easy, but Optimystic was born out of Loper practicing his own advice he tells his artists.

“I always encourage my artists to check in with themselves and throughout the years of hard work and success, I forgot to do that with myself. While I’m extremely proud of the work we did and the memories I made, it was time to leave the company and close that chapter of my life. In taking inventory, it was time to take the next step- in a way this is me working on myself. I want to keep myself and my friends afloat by helping them achieve their goals and dreams. I hope to be doing this for a very long time.”

Loper hopes to keep the same ethos he always has: continuing to guide and educate the next wave of artists into the scene. In the next five years, you can count on seeing the Optimystic Group grow into a thriving brand with like-minded people working towards that goal.

With one of the most turbulent years in dance music behind us, the only thing in front of us is optimism and hope for the future. 2020 was a difficult year and tough on everyone’s mental health with the sudden halt of the industry we all love so dear. Out of the darkness that COVID cast over the music industry, came the resilience of creatives, industry professionals, and fans. We saw artists push their creativity through live streams, merch, and new music. And we saw fans band together in remarkable support for their favorite creatives.

“We are going to figure it out. Artists are struggling right now. Being able to diversify and find new revenue streams is supercritical right now. We have to be willing to try new things even if they might fail to survive right now. We have to keep the optimism that things will get back to normal and that shows will come back sooner rather than later. As an industry, we are going to figure it out. I think the good that has come out of this is that people have started doing other things with their time and finding new outlets for their creativity.

This is the first time in years that I’ve been consistently home and it’s been awesome to spend time with my family. It’s given me the time to learn how to be better and work better and move forward through this time. Anything worth having isn’t easy. This year has really personally challenged me to make myself, my brands, and my clients better than ever and to reflect that into other people’s lives.”

All in all, the future is optimistic.

Looking for new music? Keep up with our weekly Spotify Playlist, Fresh Hunts. Updated every Friday with all the latest releases. Whether it’s the newest drops from Wakaan, all your favorite artists, some old-school, or underground…we just want you to hear it.