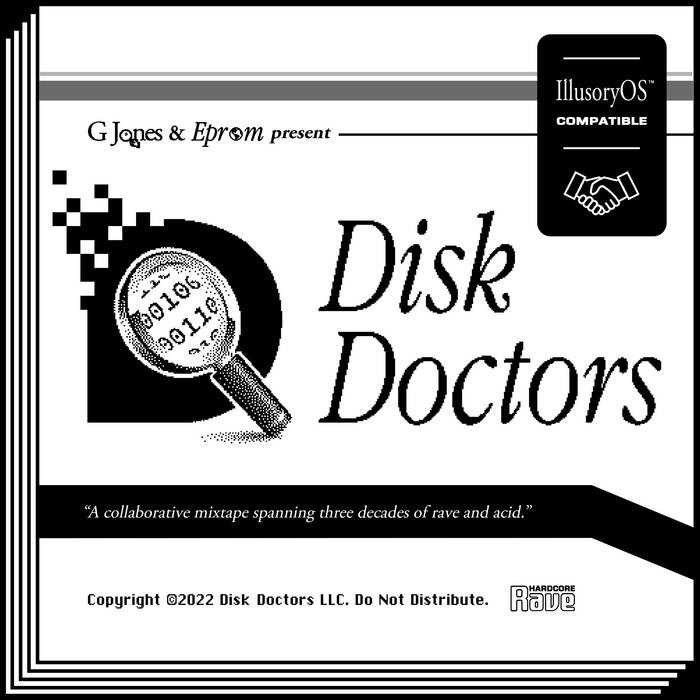 Experimental legends G Jones and Eprom guide us through 41 minutes and 39 seconds of wicked breaks and acid bass in their collaborative mixtape, ‘Disk Doctors.’ With virtually mythical edits, highly anticipated collabs, and fan favorite solo IDs, Disk Doctors gears up to be this year’s most talked about joint effort in electronic music. It’s official; the doctors are in.

Disk Doctors provides a deliciously trippy taste of what’s to come for future releases. As a potent followup to their recent EP debut of Acid Disk 2, we might have to dub 2022 as the year of acid rave. Among the long-awaited collaborations are Eprom and G Jones’ “R.A.V.E,” and G Jones and ISOxo’s “Say What.” If you enjoy a simultaneously grimy and beautiful listening experience, a highly recommended personal favorite is the edit of Koreless’ “Shellshock” starting at around the 30-minute mark.

Yearning to expand your rave horizons? Look no further! Nostalgic of groundbreaking works by founders of early electronic music, the Gprom boys cease to shy away from transparency behind their inspirations. Paying homage to pioneers such as Oneohtrix Point Never, Rustie, Aphex Twin, and more, the Gprom team taps into a genre-defying blend of acid, 90’s rave, and experimental trap.

Time for Your Checkup with Disk Doctors G Jones and Eprom

Although release dates have not been set for a majority of this ID treasure trove, you can find G Jones rinsing them at his remaining tour stops, or perhaps take a trip and catch a listen at one of Eprom’s year-end festival sets. We were also lucky enough to be given the full tracklist from G Jones himself, see anything you recognize?

Regardless of how you tune in, vibe out and let the Disk Doctors take you on a cross-genre journey of sound like no other.

Listen to Disk Doctors in its entirety below!

Looking for new music? Keep up with our weekly Spotify Playlist, Fresh Hunts. Updated every Friday with all the latest releases. Whether it’s the newest drops from Wreckno, some old-school, or underground…we just want you to hear it.

I write songs and make noises!