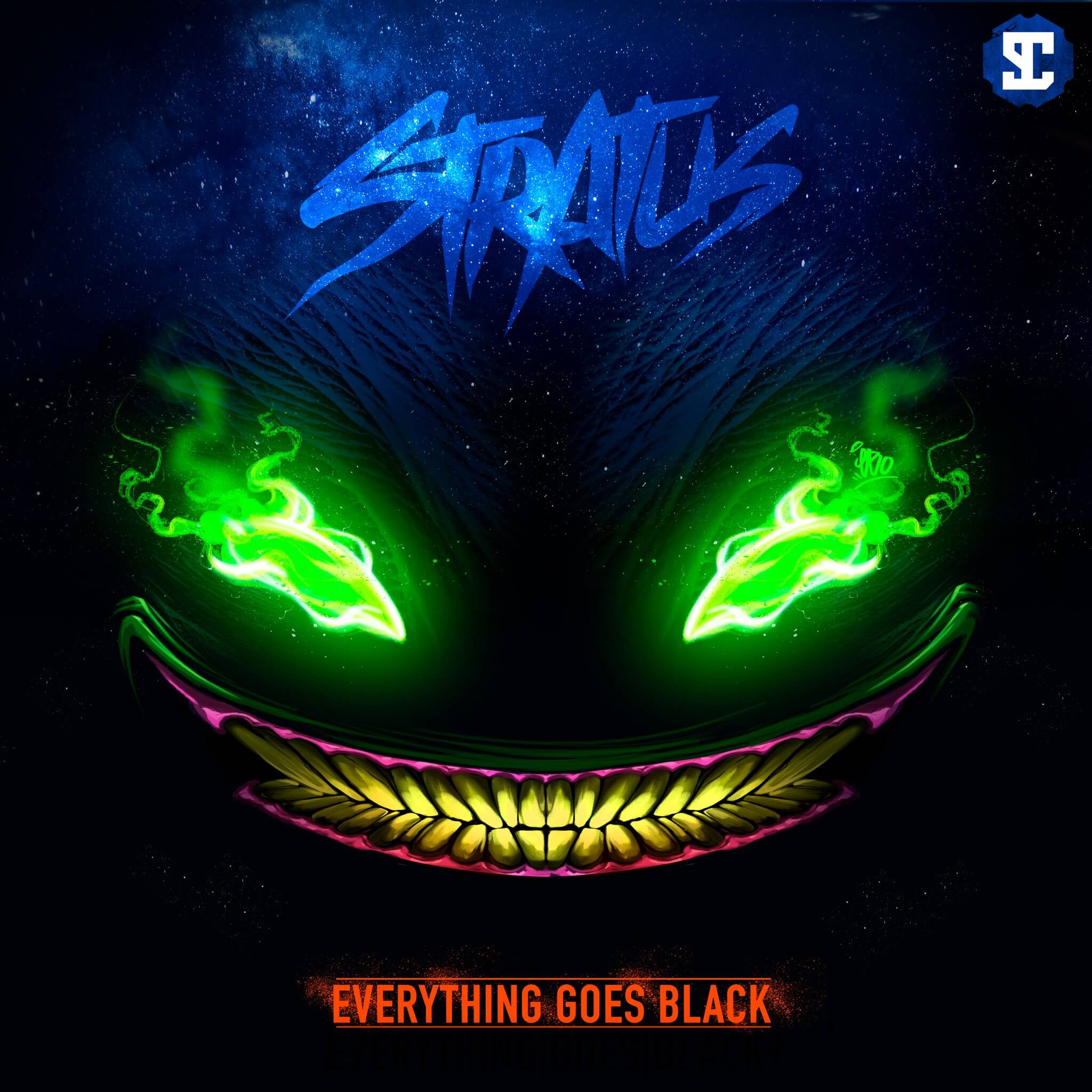 By Nicole AloiaMarch 2, 2020No Comments

Recently, I had the pleasure of chatting with a master of dubstep and gem of a human, Patrick Stratton. The Chicago producer, known as Stratus, has a primary focus in dubstep, but don’t be surprised to find a taste of future bass, house, and other genres thrown into his vast discography of high quality bangers.

Much of his versatility can be heard on his latest release, the Everything Goes Black EP. Stratus’s EP was released on SubCarbon Records, a label created by Ganja White Night. He will also be joining GWN for their 2 day event, “Wobble Rocks” on April 17th for his first time at the Red Rocks amphitheater in Colorado! Stratus has certainly found his lane in the dubstep game. Backed by tremendous creative momentum and solid support, we have no doubt that he’ll continue delivering groundbreaking tracks as he hones in on his craft.

Through strikingly crisp elements, grandiose introductions, neck-breaking intensity and satisfying bass, Stratus’s sound is a headbanger’s dream. Stick around to learn more about him as a producer, DJ, and human being!

Nicole: Alright, here we go! Let’s talk about your EP that just came out on SubCarbon Records. This isn’t your first time releasing with them, so clearly GWN has taken a liking to you and your music. That’s really something to be proud of. Can you tell me a little bit about how your relationship with GWN and their label came about?

Stratus: Yeah, it was kind of dumb luck actually, I had a big batch of songs and we sent it over on a submission email. There was one song in the bunch that sounded a little different than my usual style. It was a little bit of a ‘wobblier’ song. I threw it in, just in case. It was kind of a throw away. I didn’t really know what to do with it, but of course, that was the one they chose. I think everything else was a little too ‘aggressive, North-American style’ for them, but they liked the wobbly one. That one went pretty well, so after that I developed an EP for them. That was around a year ago.

Nicole: I love how that played out. Where can we find this ‘wobbly’ track today?

Stratus: It’s called “Said Boom.” We did a free download for that one.

Stratus: So, yeah, it was great to have the song do pretty well. There was a nice momentum going, and just a few months later I did my first EP with SubCarbon as well.

Nicole: It must be fulfilling to reflect on that first moment of submitting your ‘lucky’ track, “Said Boom” seeing as now you’re on the GWN line up for Red Rocks! That’s just one of those venues everyone dreams of playing one day.

Stratus: Yup, it is one of those things that is certainly, in retrospect, kind of weird to tie the events together. I didn’t think that giving them kind of a “throw away” record would lead to a bucket list… Yeah. I’m very grateful for them!

Nicole: I know they also took you on tour for a bit. Can you tell me about your experience on the tour bus? Was it hard to adjust to that environment?

Stratus: Being on the bus certainly has different conditions. You know, you don’t get to go back to a hotel and have meditation time or anything. But, the adjustment of comfort is made up for by pure adrenaline. There’s something special about being with a big group of friends, playing crazy shows every day and going back to your little fraternity on wheels.

Nicole: Although I’m sure it gets exhausting, I can imagine the free and creative energy is high on the bus. You mentioned “meditation time.” Are you one to meditate regularly, or was that more of a hypothetical?

Stratus: Oh, no, I actually suck at meditating. I’ve tried before and my brain has not allowed it yet. Basically, decompression time is what I was referring to. Meditation is something I would love to pick up though. Any tool to maintain sanity or clarity is valuable to me. I just haven’t mastered that one quite yet, but I’d like to.

Nicole: Oh yeah, It’s so tough. I have tried it myself, mostly unsuccessfully. Do you have a pre-show ritual, so to speak?

Stratus: In general I’ve been trying to reprogram myself to lead a more balanced lifestyle that promotes sanity in the long-term. That’s my main focus. Just kind of staying level-headed, eating healthy, things like that. Before a show, I try to just have a clean-ish meal and maybe a drink or two, and hangout with people to calm the nerves. Although, it gets to me a lot less. I used to get pretty bad though… I used to freak the f*ck out. I’m more confident now. I try to just go with the flow before a show.

Nicole: I’m sure finding that lifestyle balance has been a part of the learning process along the way.

Stratus: Definitely. When I was younger, pff… I mean, I’m 29. But, back in the day, I guess I would look at the 24 hour cycle a bit differently. Now I’m very deliberate about the balance of getting my work done, making good choices for my mental health, and of course getting some downtime in. I would hope that the music has benefited from that.

Nicole: You’ve come such a long way and have many of your own tracks to play at shows. Do you still like to throw in your older songs, stick with the new, or mix it up?

Stratus: Part of the exciting thing about DJ-ing is sharing something you just discovered or made with people and have them hear that for the first time. Like many other DJ’s, I do get tired of playing my old songs. Luckily I keep my catalog stacked, even with unreleased tracks. So my upcoming sets will be pretty fresh. I also tend to think the quality of my older mix downs suck ass, and it frustrates me, so yeah I like to keep new music in there.

Nicole: Coming from my non-producer ears, I would say the quality of your songs are really top-notch. There’s always a lot going on, but it sounds super clean and hard-hitting.

Stratus: I would say the listener’s ear is more important than the producer’s. Producers can find little stupid things wrong with a song all day, but there’s high fidelity in the listener’s ear. I think that’s way more valuable.

Nicole: I agree with you on that. Producers can be so nit-picky and hard on themselves, when in reality those tiny tweaks might go unnoticed to the average listener. As an average listener myself, I have to ask. What would you say are the biggest differences between dubstep and riddim?!

Stratus: Haha, nobody knows that shit! So, any dubstep now that’s tear-out-y with a kick and a clap, people will call riddim, but riddim… [I think I caught shit for saying this on Twitter] but riddim is kind of techno-y. It’s very minimal and industrial, and it’s based on long, long repetition with simple pattern development. It’s very minimal. I’ve gotten some tongue and cheeky throws from guys saying I have riddim sample in my tracks, just because I have a kick and a clap going, but nobody really knows the difference. It’s all dubstep. I just call it dubstep.

Nicole: Does it ever bother you to be incorrectly labeled a riddim producer?

Stratus: No, not at all. I’m not too worried about genre specifics. I mean, dubstep meant a pretty specific thing back in the day, relative to my experience around ‘08, ‘09 with the Caspa and Rusko type of style. It’s like the term “house,” there are a billion sub-genres to go into that, and that’s sort of how I view it now. It all falls under a big umbrella to me.

Nicole: I like your take on that. Speaking of house, the third track on your Everything Goes Black EP, “Amusia” starts off with a house beat. I was expecting a bass house track, but it goes right into dubstep and then some halftime. It’s a really unique song.

Stratus: Yeah I love throwing in stuff like that. I mean, I like everything (genres) and I like to make everything, but there’s a lot of styles I don’t get too release too often. So, I’ll throw those in there and switch it up often in my songs.

Nicole: Do you feel tied down to dubstep in a way, or pressure to stick to one style when it comes to releasing music?

Stratus: Part of me as an artist is like, “I can put out whatever I want, whenever!” But, of course there’s a certain style that I want to keep my project centered around. Yeah, I feel the need to almost stay in a lane, for lack of a better word.

Nicole: Well, you’ve done a great job at creating that certain aesthetic for yourself as Stratus. Do you find yourself using elements from previous projects for the current ones? I noticed some similarities to your Long Pig Blood Fire EP to your track “Move n Skrt.”

Stratus: Absolutely. I think that’s the coolest part about being a producer. I mean all of your project files are essentially your own library of things to pull from. It’s cool to pull little call-backs, licks, chunks of chord progressions, certainly instruments, definitely drums. I really like pulling little pieces from old songs that I love, and then using them, better I would hope. There’s always strokes of genius in your old work even if it’s not so great. But it’s cool to pull those moments and use them more effectively.

Nicole: That’s a really thoughtful way to look at your old work. It seems like you understand yourself really well and work effectively on your own. Do you enjoy working with others too? I know you have a handful of collaborations out currently. Can we expect any more in the future?

Stratus: I’m kind of pulling back on collabs and trying to be very selective about who makes sense to work with. There’s been some odd attempts that haven’t panned out all the way. But INZO, for one, was very fun to work with. SubDocta, Dirt Monkey, and Protohype were all very fun to work with as well. But yeah, I’m pretty focused on solo work right now.

Make sure to check out Stratus’s new EP here!

If you need a little warm up, or you’re in the mood for some mesmerizing visuals, there’s a super dope animated music video for the EP’s opening track. Watch it on YouTube!

Thank you, Stratus! Electric Hawk wishes you nothing but the best. You’re going to absolutely crush Red Rocks!

And if you’re looking for a solid playlist to follow, keep up with our weekly Spotify Playlist, Fresh Hunts. Whether it’s the newest drops from Stratus, all your other favorite artists, some old school, or underground—we just want you to hear it.