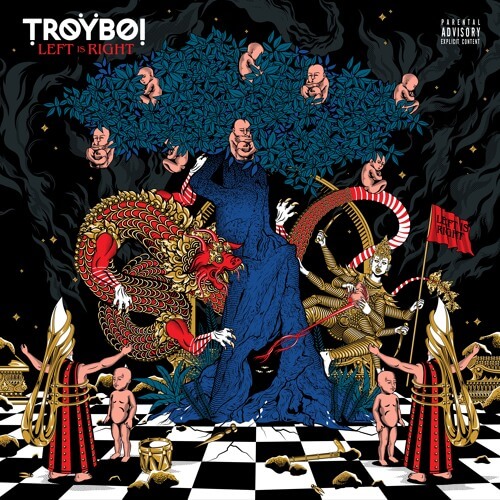 Left Is Right And Trap Is King, Celebrating The Anniversary of TroyBoi And His Debut Album

By Natalie CoreyAugust 25, 2021No Comments

Today is a very important day. Its been 4 years since the release of the immaculate trap album Left Is Right was release as a debut album by TroyBoi. He had already been on the scene for a while, many singles found deep in the recesses of Soundcloud. But with Left Is Right he pulled together some of his best releases and some brand new ones to create one of the best debuts we have seen in a long time.

Starting off a little later at the beginning of the album, Her Feat. Nefera & Y.A.S. has vocal distortion in this song is to die for, it rings in your chest and yet still is clearly rooted in Nefera’s beautiful tones. TroyBoi bursts out of the gate with his first few tracks, only to real it all back in with the smooth cruisey track that is Wavey. Followed by Tender Love, a track that surely did not get the love it deserved. The sounds in this one are clean and crisp without breaking the sound barrier. It gives your ears a stress-free listen of bass music, which is difficult to find sometimes.

The perfect music to space cruise to

I still remember the first time I heard ili… This is a song you are required to listen to with the windows all the way down, it doesn’t matter if its the middle of winter this song is too big for your tiny baby car. KinjaBang is a song that hits you as quickly as it leaves you. I got to hear this song live for the first time after four troyboi sets and it was everything you could expect it to be and more.

After being left breathless by KinjaBang he heads straight into Dark Lawd, a song that manages to throw a bunch of sounds into the salad bowl and comes out the other side perfect. This song is one of my personal favorites on the album. And have you ever heard Flamez dropped live? Enough said. Snobby feat Icekream is a perfect example of the use of the lack of sound to make an impact in a song. Less really is more in some cases.

A flawless ending to a flawless album

Only to be followed up by Grimey, the song in your head when you hear the word TroyBoi. No matter how many times you play it it’s still just as good as the first time. The drum hits in Sensei are the dictionary definition of masterful, every single hit resonating in your bones. The dubbier Look at Me feat. Ice Cube is a perfect culmination of the styles that have been shown through out the album. Topping it off with the classic O.G. he truly puts the cherry on top of the best ice cream sundae you’ve ever seen.

Here’s to hoping he follows through soon with his idea for a 2nd album. We literally do not have the ability to imagine what the next release like this from him could be. We are on the edge of our seats (mostly because we can’t stop dancing to these tracks) and always have an eye on TroyBoi and his music.

Listen to the full Left is Right by TroyBoi below!

Looking for new music? Keep up with our weekly Spotify Playlist, Fresh Hunts. Updated every Friday with all the latest releases. Whether it’s the newest drops from TroyBoi, all your favorite artists, some old-school, or underground…we just want you to hear it.

Hulaween 2022 Recap: The Magic of Suwannee Shined Yet Again

10 Drum n’ Bass Songs to Get You Ready for Summer