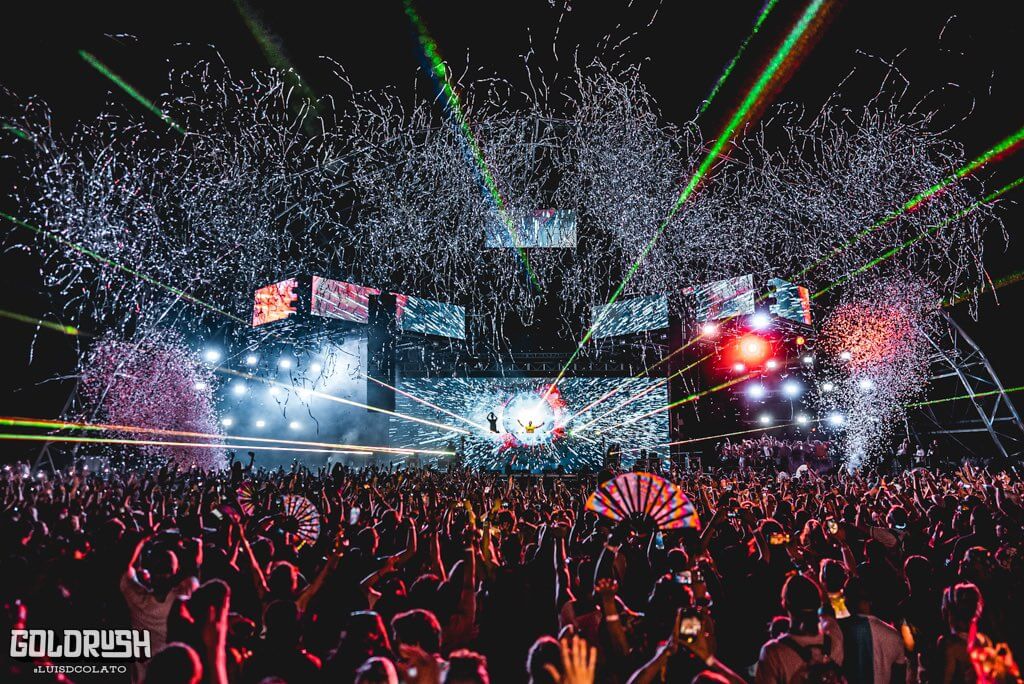 Sometimes you just need a little getaway from reality and that is what Goldrush was. From the constant praise of hearing about Relentless Beats and their events – along with the Arizona scene being amazing, it was time to witness it all myself! Here is the Goldrush recap!

Before Entering: The Wild West

After a long drive from Colorado to Arizona, we didn’t really know what to expect. With this being my first time in Arizona, one of the first things I noticed was the picturesque view of where the venue, Rawhide Western Complex, location was. Immediately, from the drive into the venue, you are engulfed with the massive height of the Golden Gorge megastructure. As advertised as being one the newest and biggest updates to this year’s Goldrush, I will say Relentless didn’t miss a beat on that description.

While we waited for the doors to open, it was time to register my wristband with my card. Since Goldrush was a completely cashless/cardless event, the wristband was your main ticket and also your source of paying for amenities throughout the festival. Although it was a little odd at first, it became pretty habitual after purchasing a few drinks and some food. And overall, I did enjoy the experience without the stress of pulling my card out of my wallet in line.

Upon entering the actual festival, the music immediately was vibrating through your body with the main stage being near the entrance. As we walked in we were welcomed with the cheer and high energy of the Goldrush staff greeting everyone walking into the festival. They really started off our journey with a smile and some good vibes. And once walking you are thrown back in time to the wild west as you see how Relentless has decorated the main Western Town.

It was fascinating to walk around and see some of the casts and attendees fully decked out in Western gear. You could walk into the various Saloon shops and parlors. Where you could educate yourself in the local Cannabis scene, purchase official Goldrush merch, ride a mechanical bull, get some food, and more. And late at night around 9 pm and 11 pm if you were in the town, you got a chance to witness the daily parades that went across town!

The Atmosphere Between Each Stage

Each stage brought a different kind of aura to it. At Goldrush there was a stage perfectly made for each fan, whether you wanted to fully emerge into the headliners, feel the heavy bass, or just transport to an underground warehouse. There was a stage built for everyone’s taste.

The megastructure. As mentioned before the stage was huge and could be seen basically at every aspect of the festival. Without a doubt, Relentless Beats spent a lot of time ensuring their fans got a unique experience. If you got to enjoy the VIP experience near the Golden Gorge stage, you know the upper deck view was a plus. You couldn’t miss a single spectacular moment in front of you. But whether you had VIP or GA, it didn’t matter – the crowd energy was massive.

Acts like Cray, Moore Kismet, Louis Futon, and the once and a lifetime GRiZ B2B Zeds Dead set gave everyone the ability to enjoy and just fully let loose at the Golden Gorge. From the pyrotechnics, visuals, and confetti in the air, Relentless Beats didn’t miss a beat when it came to their main stage.

In contrast to the Golden Gorge, The Hideout, where all the House acts performed, brought out an electric atmosphere like no other. Quickly, The Hideout became my favorite stage with how they did the production and layout of it. With the Weird and Wonderful production and circus right next to the stage, it immersed the performers into the crowd. If you were in the VIP area, you were able to hang out with some of the Weird and Wonderful cast as they grooved along with you to the music. They kept the production minimal at The Hideout, but it made for a very warehouse-like environment. So for those craving that warehouse experience, Goldrush brought it perfectly to this stage.

Getting to witness artists like Noizu, Gorgon City, Dombersky, and the legendary Seth Troxler B2B Tiga at The Hideout stage definitely felt like a surreal dream! I truly didn’t want to leave the atmosphere of this stage all weekend. Definitely will be checking this stage out again next year!

Pioneer’s Peak made the bass come alive! This stage brought crazy and wild production. If you have been to Goldrush before, this was previously the main stage. As the day progressed, the crowd got to enjoy a beautiful and scenic sunset behind the stage before the full capabilities of Pioneer’s Peak shined at night. Once the night hit, so did the rest of the production. Pioneer’s Peak brought out the best possible experience for all the bass-loving fans. From the visuals, lasers, lights, and amplified bass throughout this whole stage, there was no doubt you wouldn’t catch yourself headbanging. This was the stage to release your inner beast out.

Catching acts like Virtual Riot, Phaseone, SVDDEN DEATH, Getter, and Player Dave. Pioneer’s Peak was the stage I headed to if I needed to escape and let loose on some bottled-up energy! It was perfect to get away to. Relentless Beats didn’t let down their bass-loving fans and constantly brought the heat after each and every act!

Despite being surrounded by all the music around you, if you needed a small break to get away from it or some time to kill before your next artist on your list, Goldrush brought a lot of different things you can experience.

Goldrush allowed you to have fun in many different ways, like getting your groove on at the Roller Disco. It was definitely a fun experience to skate and listen to some retro 70s music for an hour. Although I did fall my butt once… oops! It is a lot harder than it looks, but still a bunch of fun. Plus everyone looks ten times cooler while rollerskating.

Along with the Roller Disco, you were able to enjoy some more amenities. Including some dispensaries doing giveaways and even blackjack tables. But the feature I felt was the coolest was the ability to get massages. Especially after a big night of headbanging or just letting your whole body go nuts, a massage was definitely needed.

Goldrush brought out all the live-action and some comedy acts to the festival at the Six Gun Theater. Right in the center of the Western town, you were given the opportunity to witness some fun acts and enjoy some entertainment aside from the music. And if you had a big group, you could also provide entertainment to everyone in the crowd by performing some karaoke.

As mentioned before, right next to The Hideout stage is where the magical circus was located. Goldrush gave everyone the chance to witness some talented acts perform very impressive stunts. I couldn’t take my eyes off them

This was an amazing addition to the whole Goldrush experience. This definitely became a favorite place to go aside from the music! If Relentless has this feature next year, be sure to step in and witness all the incredible talent here whenever near The Hideout stage.

Slightly tucked away inside the town, you couldn’t help but notice a giant disco ball. As it welcomes you in, you enter the Silent Disco at Goldrush. This small little stage was also where you could find the infamous Beatbox Beverages that have been all over the festival circuit. So as you picked up a drink, it didn’t hurt to stick around and listen to some of Arizona’s locals performing at the Silent Disco.

It was sad to say goodbye to Goldrush.

Overall, the Goldrush experience was an incredible time. The Arizona crowd and scene were extremely friendly and courteous, whenever passing through the crowd or just wanting a little extra room to dance. Relentless Beats has surpassed my expectations of what a festival should be. Even after returning home, I could not help but think about returning back to Arizona to witness some more of the scene.

With Goldrush officially being over, that doesn’t mean Relentless Beats is sleeping. Already planning for the next with Dusk Music Festival coming to Tuscon in mid-November. And also Relentless’ second biggest production Decadence Arizona NYE event coming at the end of the year. With more Decadence announcements approaching, it has me thinking if I will come back to Arizona to witness their second-biggest festival. For now, I will hold onto the memories of Goldrush and continue to tell my friends about the surreal moments. Maybe I will be in Arizona sooner rather than later. 😉