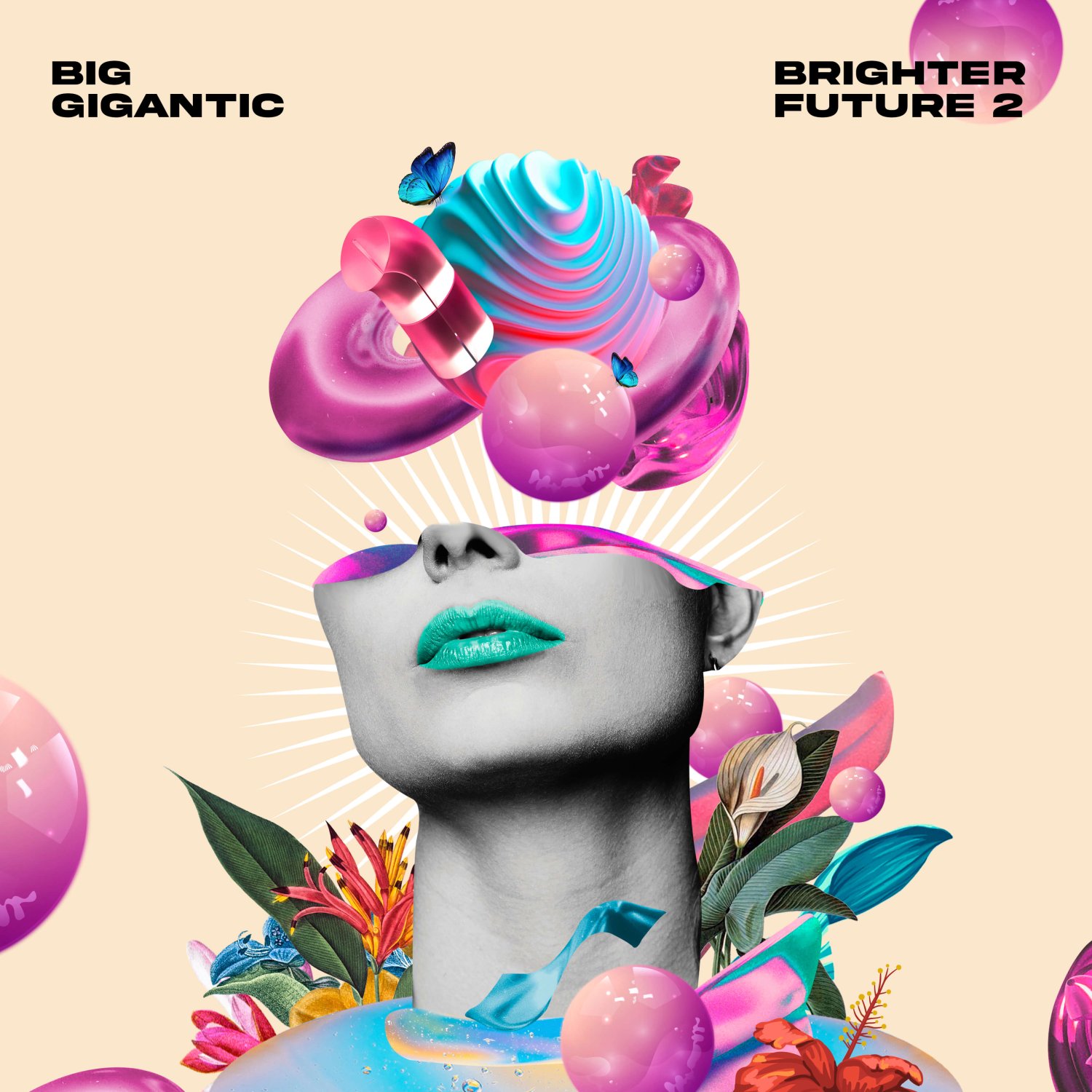 By Frankie ZimmermanJune 10, 2022No Comments

All joking aside, this legendary duo based out of Boulder, Colorado has compiled one of the most eclectic albums we have ever listened to. This star-studded album features the likes of MOONZz, GRiZ, Elohim, Harold O’Neil, and many more. This album is absolutely stacked with veteran superstars, along with hot up and comers.

Big Gigantic was founded by saxophonist/produced Dominic Lalli (pictured on the right) and drummer Jeremy Salken (pictured on the left). These two are not afraid to dabble in various genres and have a unique sound featuring a clever mix of electronic, jazz, pop, and hip-hop.

Okay, before we talk about the album. Did you hear about that Gigantic NGHTMRE set at EDC ’22? Arguably the best set of the weekend. Their high-quality production combined with the talents of so many other artists created the anticipated Brighter Future 2. This duo knows how to put on a show, and we are so excited to hear all these new tracks played live at future shows.

Big Gigantic already released five singles that will be on Brighter Future 2.

These singles feature heavy hitters in the music industry. One of our favorite singles released that will be on the album is titled “Open Your Mind.”

“Open Your Mind” features GRiZ, and the collaboration between the two merits a chef’s kiss. This is one of those tracks that you can shamelessly roll down your windows and turn the volume all the way up. The unique bass breaks and various electronic sounds will be a blessing to anyone lucky enough to hear it.

Aloe Blacc and Big Gigantic deliver one of the most inspiring songs of the year titled “Keep On Rising.” The track is packed full of motivating lyrics, compelling you to “Love your life, live your dreams / Do your best at everything / Don’t give up, never stop / Keep on rising.” We are loving this track – either bumping in the mornings or whenever we need that extra motivational pick-up. The uplifting backup singers, along with the horns and electronic breaks make this a mandatory listen.

The other three singles are also bangers featuring the likes of Kota The Friend, Grammy Award-nominated rapper Aloe Blacc, Vic Mensa, Mick Jenkins, and Brooke Williams. But, those are just a few of the amazing collaborations on Brighter Future 2.

The Future is “All We See”

Big Gigantic is showing a lot of confidence in Brighter Future 2 by naming it after their most successful album Brighter Future. To be honest, they nailed it with this one. This new album features just as many diverse genre-bending artists as the first one and even features new artists that are certain to make a huge impact on the music industry.

The album starts off hot with “Future’s All I See” featuring MOONZz. The beginning of the track starts with instruments and has a jazzy feel to it with loud horns supporting the killer voice of MOONZz as she talks about the road less traveled motivating us to keep on climbing while the raindrops fall. Then in an uplifting fashion, she belts out “FUTURE’S ALL I SEE” as the dirty electronic bass drops forcing you to nod your head to this banger of an intro to the Brighter Future 2 album.

Nothing feels better than being “Free”

Big Gigantic teamed up with the one-woman show, Elohim. She is also a genre-bending electronic/alternative artist that is a true star. She sings, writes songs, and produces. The track starts off with Elohim passionately sharing the concept of questioning everything and how hard it is to be happy. She reminds us to breathe and let the love flow through. “Life is but a dream … Nothing feels better than when you’re finally free.” The concept of being free is explained by Elohim in this track, accompanied by beautiful music production from Big Gigantic. You can hear all the horns and electronic breaks that make this a beautiful song to listen to on a sunny or even rainy day to boost your mood.

Our Love for Brighter Future 2 is Unlimited

Big Gigantic ends the album with Harold O’Neal. This is one of those tracks where you can sit back, relax, and enjoy the sheer musical mastery showcased. Harold O’Neal is an American composer, record producer, and jazz pianist. He also worked in a variety of musical genres. On this track, you can hear him collaborate with Big Gigantic to produce the most unique jazz composition we’ve heard lately. The track has ZERO lyrics, but you can feel the soul and story being told. We wouldn’t want the album to end any other way.

Big Gigantic will be headlining at Electric Forest in Michigan on Sunday, June 26th. They will also celebrate the release of their album by starting a tour in Salt Lake City, Utah at The Complex. You can check the rest of their tour dates here.

And if you’re looking for a solid playlist to follow, keep up with our weekly Spotify playlist, Fresh Hunts. Whether it’s new Big Gigantic, all your other favorite artists, some old-school, or underground…we just want you to hear it.