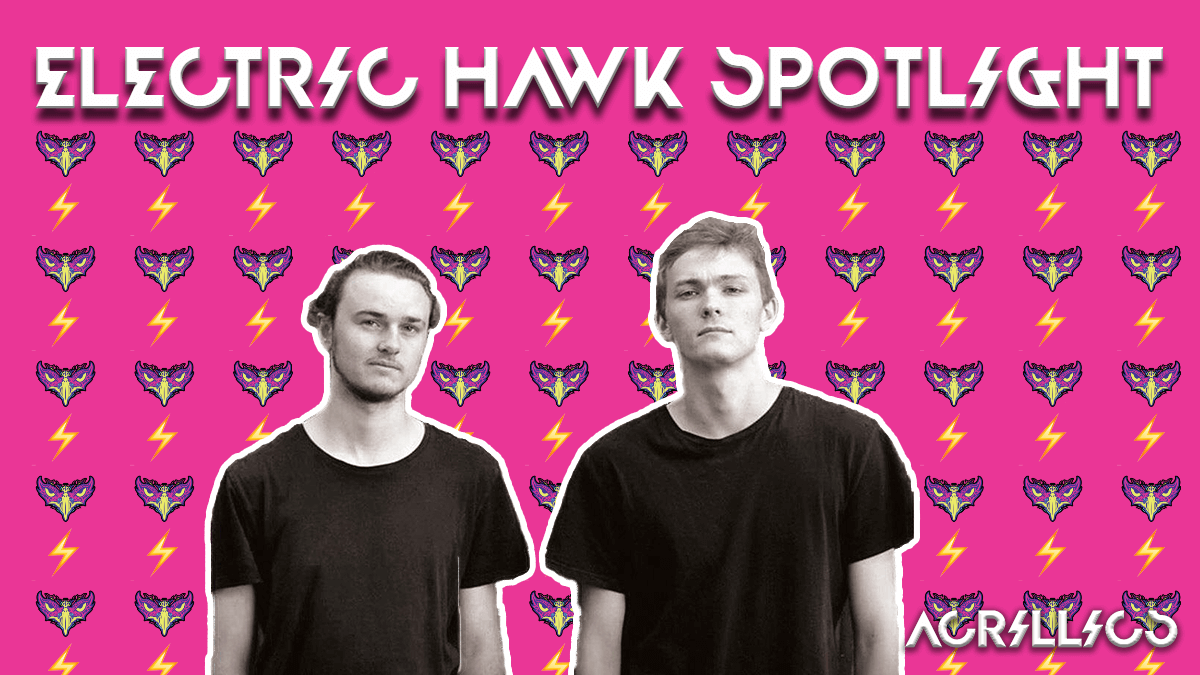 ‘Acrillics, Hmm…’ I thought as I sat down on a sunny morning one day, scrolling through Slack and seeing any and all new music that I could find. being unfamiliar with the name, but seeing the word “trap” next to it, I became curious and wanted to stop and investigate.

I am, what you would call, a trap queen. Following the link to “Vault,” one of their latest releases on the Electric Hawk Label, and from there I didn’t turn back. From scrolling through their discography from their first release the “Lost Colors EP” to their latest, “Vault”, their music takes you back to the trap glory days – the years of Mr. Carmack’s “Kick It Up” and when LSDream was Brillz.

Their sound pays homage to the trap greats before them but also distinguishes them as a revitalizing force of the sound right now.

The opportunity to interview the Acrillics duo landed in my inbox at 10 AM on another sunny morning, and I couldn’t believe that things would come full circle like that—one morning I was trapping out to their music, and the next offered to interview them.

Seeing the traction that Acrillics has gained, especially in the past year, is inspiring to say the least. Not only can you hear it in their track progression, but the boys have built their followings from the ground up, creating a fanbase full of trap loyalists and new listeners alike.

I’m excited to have the privilege to share a bit of their story, the inspiration behind their tracks, and where they see themselves heading in the future. Not to mention, a bit about their exclusive guest mix dropping on Electric Hawk!

Tate Johnson, Electric Hawk: You guys met in 2016 – can you tell me the story? How’d you end up realizing you both wanted to make boundary-breaking music together?

Rob Atkins and Andro Mathewson, ACRILLICS: We met in 2016, in Dunedin, on the south part of the South Island of New Zealand. I spent 6 months there studying abroad at the University of Otago where Rob was at the time. We were introduced by a mutual friend and ended up DJing, what would be the largest house party of the semester. The next morning we met up and just started making music. Our individual musical backgrounds really just worked well together.

TJ: That’s such a serendipitous meeting, especially considering you’re both from two different sides of the world – how long did you have together after you met in NZ to really jumpstart/make progress on the project of Acrillics?

ACRILLICS: We had slightly less than 6 months really. And we ended up spending most of it stuck in my room making music on Ableton and prepping mixes & sets. We managed to finish up our first EP “Lost Colors”, which got featured on a couple of radio stations and outlets down in NZ, which ultimately led us to have our debut show in October 2016 in Wellington, the capital.

TJ: That’s good though that you guys were able to connect and just start making music! Speaking of connections, what are some of the most unexpected but incredible connections you’ve made through your music journey so far?

ACRILLICS: Anti. is one of our closest homies in the industry after just meeting like 6 months ago and its super to see him grow as well. [Congrats on the QGR release homie ;)!] We spent a lot of time in the studio with We Rose finishing up our recent collab (the first track of the mix) and they’re just awesome. Otherwise, we’ve made a lot of friends along the way and it was the best feeling to see a lot of them that we’d never met IRL at our LA Debut, or at our weekly outings to Sound for Space Yacht – RamonPang, Cam Daniels and Youngblood to name just a few.

TJ: So what do you guys do for fun, either alone or with friends? Rob, I know you have a thing for skateboarding, and Andro, I see you out here modeling! What made you start skateboarding, Rob, and got you into modeling, Andro?

ROB: I’ve been skating since I was 8! One of my friends came to school with a skateboard one day and I have been hooked on it ever since. I try to get out every other day as a break from working on music, it’s a nice contrast when I’m struggling to find inspiration. We have a good group of skateboarders in my hometown in New Zealand and are currently building a community DIY skatepark too which is a fun side project!

ANDRO: I need to delete that stuff. It was my first year of college and a friend asked me to audition. I did some college fashion shows and then ending up doing Philly Fashion Week twice and some photoshoots here and there for clothes, especially back home in Bulgaria but I ended up stopping to focus more on school and music 🙂 Maybe I’ll get back into it one day, we’ll see 😉

TJ: That’s so sick, and an incredible side project and way to give back to the community, Rob! And Andro, I’ll be looking out for your potential return to modeling, haha. Going back to music, It’s clear that you guys are big Mr. Carmack fans. What are some of yall’s favorite tracks of his?

ACRILLICS: Yeah, we both love Mr Carmack haha. Some of his earlier OG trap tracks that got us in the genre for sure – ‘Simpler’, ‘Charge’, ‘Runner’,  ‘Pay For What’. But from his new stuff, “Remember to Remember” and “Vista” are just amazing.

TJ: Yup!! Mr. Carmack is such a legend! You can hear the influence in you all’s sound and it’s amazing. Other than Carmack, If you had to pinpoint songs or artists that made you want to make trap music, who/what tracks would they be?

ACRILLICS: Definitely, anything by What So Not and RL Grime’s earlier tracks. Besides that Troyboi‘s “O.G.” and Major Lazor‘s “Get Free”.

TJ: You can hear that old-school, OG trap sound in Acrillics, and it really brings a special nostalgia into the listening experience. Your track “Excess” really carries that sound. How did it feel to see the numbers jumping so quickly and so high for that release? Like, how did you guys feel when ‘Excess’ hit 10K on Soundcloud?  It’s a slapper – you guys totally deserve all of the success it’s gotten!

ACRILLICS: Thanks! It’s great, it feels amazing and we’re just so grateful for the support on it. It was amazing to get the email from Mat Zo and his team that they wanted it to be on the compilation. We spent 15 mins laughing and crying after we read it.

TJ: Speaking of hitting goals, earlier this year you guys tweeted out your 2020 goals. They were: have a debut LA show, release 3 tracks on labels, release 3 collabs, have your music played at a festival, and a bonus: play at Sound Nightclub in Hollywood. I know that the past few months have pushed everyone to shift a bit on their traditional paths, but how has Acrillics been doing in spite of all the challenges?

ACRILLICS: Honestly great. We had our LA debut (Shoutout Mat Zo and Mad Zoo for believing in us 🙂 We’ve released 2 tracks on labels (and recently signed two more tracks) and have finished up 2 collabs. So besides playing at Sound, all things are looking great haha.

TJ: Ok, now’s the time when I want to do a rapid-fire round – They aren’t serious questions, but more just random ones that help me, and everyone else, get to know you more! Ready?

Weirdest thing you’ve encountered in America since living here?
ANDRO: There’s a lot of things but if I had to pick one I’d be the fact that Bathroom stalls have massive gaps in the door.
ROB: Taxes not being included on the price tag in stores.

Movies in the theater, or Netflix at home?
ANDRO: Netflix
ROB: Theater

Dream festival to see yourself on the lineup for?
ANDRO: Glastonbury or Tomorrowland
ROB: Glastonbury for sure

TJ: Thanks for your answers on those! (I also LOVE Salt & Straw, best ice cream!) I don’t want to spend too much time ruminating on the current global situation, but how have you guys found yourselves adapting your work schedules and day to day with Acrillics given the new state of everything going on?

ACRILLICS: Well, since Andro moved to LA from Philly about 7-8 months ago, it’s been easier for us. I’ve already visited twice. Once in July to get some production going, which really kickstarted things for us, and then again in January for our LA debut with Mat Zo and others from the Mad Zoo crew. Now, I’m back in NZ, so for us really things are more or less back to normal so to say and because we’re both working from home, we basically have more time to work on music 😉 And we’re getting our stream set up ready and will be participating in some virtual festivals so that’s cool. But otherwise, all this sucks. We were really hoping to get some shows going, but that’s obviously not going to happen anytime soon.

TJ: Well, I’m super excited for you to start streaming and I’ll be looking out for your virtual sets! You guys definitely have been churning out stuff, like your Electric Hawk Guest Mix which we’re FOREVER grateful for and even more excited for everyone to hear! 🙂 What was the influence for the mix?

ACRILLICS: Well we really wanted to showcase what you’d hear at a show of ours. It’s impossible for us to stick to one genre, so besides our favorite trap, we almost always play some house and drum and bass. We tossed in some of our upcoming releases and some IDs from friends too.

TJ: I’m so excited to hear your new Guest Mix & everything you guys have in the Vault (no pun intended haha)! Thank you so much for taking the time to answer my questions!

ACRILLICS: Thanks for the interview, and just wanted to say how grateful we are for Electric Hawk for the support and belief in us! <3

TJ: We’re grateful for you and am excited to see you guys shine!

Go catch Acrillics’ new Guest Mix for Electric Hawk down below, and check out their socials for all of their new releases!

Listen to the Acrillics Guest Mix for Electric Hawk Radio: