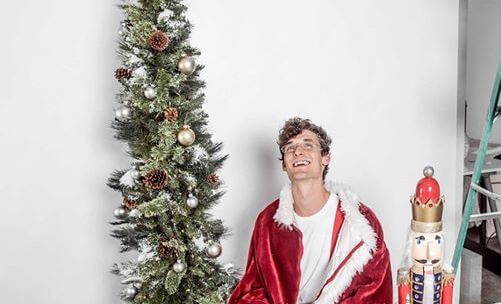 GRiZ Charity Event Grizmas 2019 was Food for the Soul

GRiZ always goes the extra mile for his hometown. However, as per usual, he turned it up a notch once again for Season Six of GRiZmas. There are always 12 events leading up to its two main shows, curated to highlight the beautiful city of Detroit. Residents of the city get to experience Jazz Caroling, Roller Disco Prom, a mystery party, and a pre-party!

GRiZmas creates a community that gives back.

Grant Kiweneski a.k.a GRiZ, with the help of his friends Harrison Diskin and Jared Berman, pulled off a stunning two weeks of GRiZmas that left everyone with memories to last a lifetime. Most importantly, It raised a large sum of money for kids in Detroit.

The proceeds from these events and the GRiZ pop-up shop will support music programs for kids in Detroit. In a heartfelt moment during his night one show, GRiZ spoke about how much it means to him for us as a community to give back. He spoke proudly of his city saying

This is what Detroit does for Detroit!

Night one touted a “10-17 GRiZ” throwback set providing moments that will stick with GRiZ fans forever. The night provided music that was food for the soul. The vibe was reminiscent of a dark party, with an emphasis on the musical aspect paired with intermittent LED walls, lighting, and lasers.

GRiZ opened with a classic intro from the Good Will Prevail album days that sent us back in time. He then went on to play some classics such as “Can’t Hold Me Down” and a flip of “Before I Go” that got everyone warmed up real quick.

Throughout the show, GRiZ and Muzzy Bear both shredded on their respective instruments and we could not help but watch in awe. Billy Aukstick would also lend his talents on the trumpet for quite a few songs.

GRiZ continued to take Detroit further back in time. Not only did he perform his own old tunes, but he also played an original remix of “Dream On” by Aerosmith and an original remix of Damien Marley’s “Welcome to Jamrock”. He closed the night with “See You Again” and “My Friends and I” which was a clever homage to the impending night two show that was sure to blow us away.

Night two would boast a “Ride Waves” set that was full of exciting performances, amazing production, and joyful uplifting spirits. The night started off hot with two new IDs from GRiZ. The opening song had a very upbeat tempo that would break into a funky bass tune. Based on lyrics and prior hints made by the artist about a ‘spaceship ride’ it was easy to assume the outer space theme would come in play with the title of the song.

The second song also had a very futuristic space-funk style with a nice house kick to it. Both of these unreleased tracks consisted of lyrics sang by GRiZ himself, which has actually been common in his recent projects. With these IDs, we’re guessing it’s quite likely another installment of his Bangers series in the works.

Griz and his team recently put an incredible amount of work into a new stage production for his shows: The Imaginarium

The Imaginarium stage production is exactly what you would think: A visual setting beyond your wildest imagination. If you haven’t experienced this phenomenon for yourself, it consists of an elevated stage, LED screens displaying beautiful and bright visuals, and memorizing lasers.

A highlight we have to shout out: GRiZ brought the Detroit Lions drumlins and MSU Brass Section out to perform “Tiger Kingdom Space Camp” with the rest of them.

GRiZmas provides an experience that helps create memories and provides life to music programs in Detroit. It’s important that events that promote the community are highlighted. GRiZ and his team were successful in creating a lasting effect in the city of Detroit. We here at Electric Hawk love to see charitable efforts in this industry and will support this behavior in the community.

To donate & get merch: https://12daysofgrizmas.com

Stay in touch with The Electric Hawk to see what events we’ll cover next: