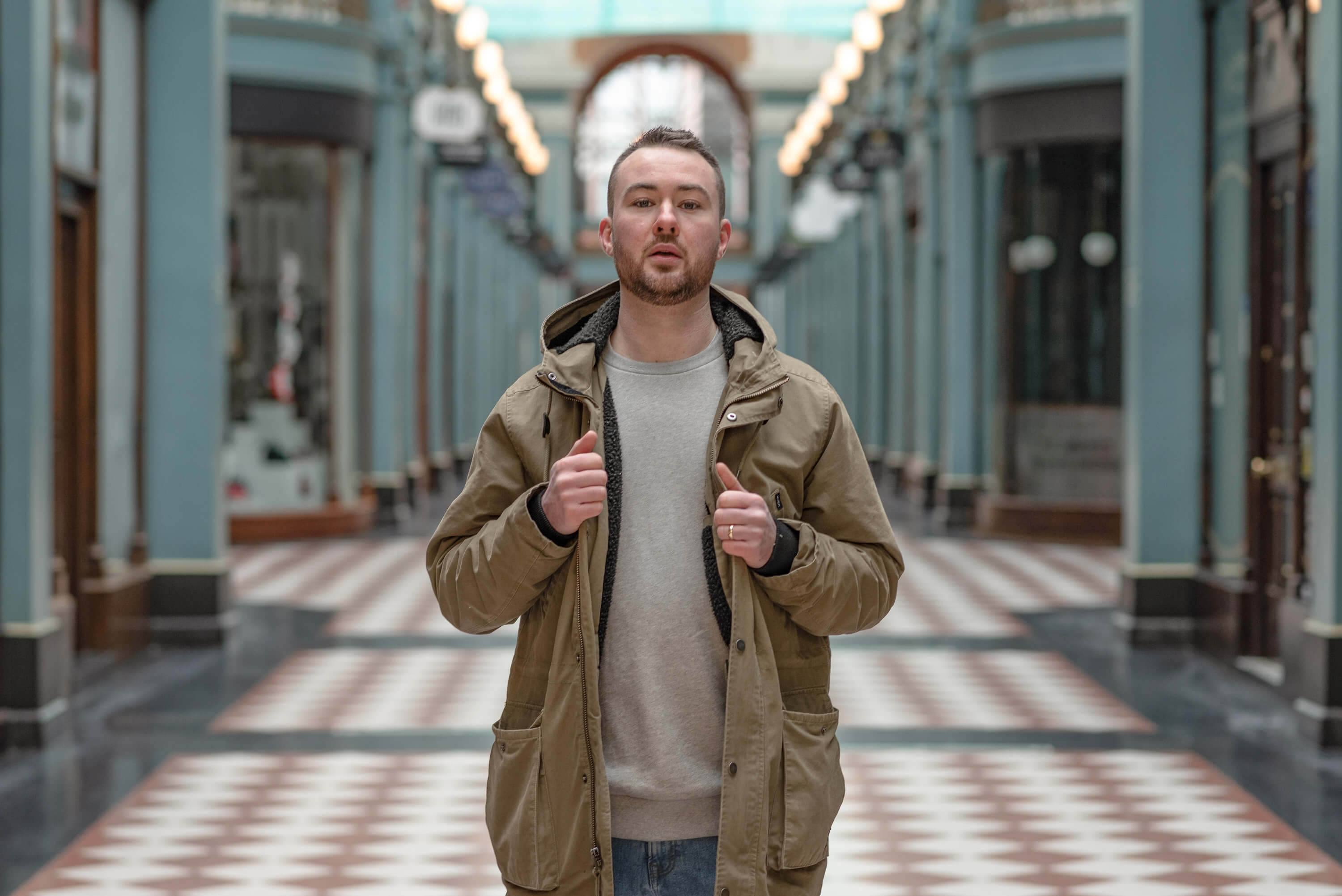 Awakening: An Interview With ENiGMA Dubz

ENiGMA Dubz is a treasure amongst a sea of ever-so talented electronic producers with an eclectic palette. None come too close to what he’s recently released with his full-length album Awakening. A long-time friend of Electric Hawk going as far back as a release on our In Unity Compilation Album and through his latest Night Flight downtempo mix, he is someone we ride (and fly) with for good reason. We got a chance to discuss his latest project, Awakening, in-depth, the creative processes, his headspace, amongst other cool happenings and inspirations in his life.

Dariel, Electric Hawk: First off, big congratulations on putting together a terrific body of work with Awakening! What was the initial spark that led to the creation of this album? Was there a specific moment in life recently that drove the inspiration for it entirely or was it moreso a vision that spanned a long course of time until the project pieces began coming together?

ENiGMA Dubz: Thank you! I’m so glad you’ve been enjoying it, it’s been in the works for a few years and I wanted to make sure it properly represented where I’m currently at right now. Over the last two years, I’ve really started to get the ENiGMA Dubz project into a place where I’m fully happy and feeling motivated to the max. This album celebrates the momentum, the learning curves, and what lies ahead.

EH: How long did it take to put something this great together, anyways?

ENiGMA Dubz: Well, one of the tracks, “Lost Souls,” was created back in 2018 and has been in the locker waiting for the right time. It’s one of my personal favorites to date, and I knew there would be a project for it that felt right. The album as a concept has been forming since 2019/2020, and I’ve been stacking the material since then. The album was formed and ready to go last year, so we’ve had time to craft a solid campaign, vinyl run, and merchandise. It’s, without a doubt, my biggest project to date.

Electric Hawk: Were there any roadblocks when developing the project before you finally decided “It’s finally finished?” Twelve tunes feel like a perfect album size but surely isn’t an easy feat for most.

ENiGMA Dubz: To be honest, I had around 25 tracks that were all contenders for the album at the end of 2020, so I wasn’t short of material. During all the lockdowns, I found my creative juices really flowing, so I hit it really hard throughout 2020. It’s pretty crazy to look back and see how much I made over the last 2 years, alongside my other work I do as a producer for various artists.

EH: From your creative perspective, how did you make the decision when curating the whole album so it made sense to you? Such as sonically and structural order.

ENiGMA Dubz: One of the main objectives was to cover all genres/styles I feel and touch on under ENiGMA Dubz. I wanted it to be a solid mixture of it all, plenty of low end pressure, vibes, and emotions. My manager, who co-runs Morii Records, and I worked closely to get the final selection right, and the rest of the tracks are sitting there ready for another big project in the near future.

Electric Hawk: These collaborative tracks are absolutely stunning – please tell us more about your connection with S.O, Hedara, Queen of Hearts, and CoMa. What was it like working with them on their tracks?

ENiGMA Dubz: Three of those artists are new connections I made in 2020 after signing a publishing deal with Black Rock. They have a HUGE roster of artists, and S.O., Hedara, and Queen Of Hearts all stood out as serious talents. CoMa, on the other hand, is someone I’ve worked with numerous times. It felt so necessary to feature her on this album; after her last feature on The Journey So Far albums – her vibe is next level.

EH: As we’ve mentioned before, this project is seriously out of this world. Current supporters of yours already never know what kind of sound to expect from your next release. How do you always manage to be a breath of fresh air so often? Particularly this album. Where have you been drawing your inspiration from? Referring back to the vision we mentioned encompassing this album – was there a specific concept you sought to achieve?

ENiGMA Dubz: Well, that is amazing to hear, thank you. To be totally honest, I tap into my emotions every time I sit down to write music. I’m constantly listening to new music too; in the car, in the studio, bathing the kids, on the train, etc. There’s SO much good music coming out every week, I’m never short of inspiration and energy. With the album, it was totally organic how it all came together. None of the tracks were forced, and building up a big stack to choose from meant I could really craft it to a well rounded project. I honestly can’t wait for the future, as I’m always hungry to create across the board of styles and genres while being true to my bass music roots.

Josh, EH: The vibier side of ENiGMA Dubz gets close to the Itona side project. How do you decide which project a track like that falls under? Do you decide before you start producing?

ENiGMA Dubz: I tend to put the different heads on at the start of each project. It sounds a bit mad, but it is literally the way I do it. I have a different approach to each project, both socially and emotionally, but you’re right in that some of the music crossovers between both styles, like when I made “You Are So.” After finishing it, we decided to make it a collab in the listing on the release, as it fit both aliases.

EH: With the sound engineering occupation and so many different aliases, do you find it difficult to change in and out of production styles or do you only stick to one style in a day?

ENiGMA Dubz: Most of the time, I focus on one project each day and I find it helps me nail whatever I’m working on. In the past, I’ve learned the hard way trying to juggle multiple styles in the same day. It’s sometimes necessary if I have a lot going on. With my engineering work, it’s predominantly in the house scene, so I try not to clutter my mind with other genres. Otherwise, it could send my work project down the wrong lane in style, sound choices, etc.

EH: You’ve mentioned before about adding in live guitars into tracks – any thoughts of adding your cello or your wife’s violin into a track?

ENiGMA Dubz: You know, I’ve thought about it briefly, but never had a big enough urge to start recording ideas. The guitar tracks, however, are really coming together and currently in the ‘unreleased’ dropbox folder. Just waiting for the right time and space between other projects to line them up for releases!

Josh, EH: You recently launched your own label, Morii Records. Are there any other artists you’re looking to bring onto the label? Also, where did the name for the label come from?

ENiGMA Dubz: At the moment we (my manager and I who run the label) are building the foundations with in-house projects, so mainly ENiGMA Dubz and Itona projects. We definitely plan on bringing other artists in, though; it will probably start with guest remixers on releases before solo EP’s from other artists down the line.

The name ‘Morii’ has an ancient meaning of “the desire to capture a fleeting moment.” We were researching words, and after stumbling upon this, we knew instantly it was perfect for the label title. Music, for me anyway, is all about the moment when listening to it, having something grab you, and take you somewhere.

ENiGMA Dubz: Bass music is expanding and evolving so fast, it’s very exciting to see it and be amongst it too. I’ve noticed a big movement of very experimental bass music, stateside in particular, and I think the fusion between that and the more classic, 140 bpm dubstep style is where it’s going for sure. Artists like Yheti, Tsuruda, […] Eprom, Alix Perez, etc., pushing those boundaries in bass music, alongside artists like Ternion Sound, Mythm, Notlo, Truth, Commodo, etc., pushing the boundaries in dubstep. It’s hard to stop calling names out to be honest; there’s SO much amazing music dropping weekly, I just love it.

EH: Touring in the US often and living in the UK you get a very unique and dynamic perspective of the two countries’ music scenes. How would you describe the two? Are there a lot of similarities?

ENiGMA Dubz: One thing I notice in the states is the overall vibe being more charismatic at shows. Also, having the fusion of music, art, live performers, etc. It creates a very thriving space at shows to have so many celebrations of art under one roof. However, the UK certainly has a tonne of character and the vibe is unmatched at a big rave. It’s a bit of a different vibe, but still wicked all the same. It’s hard to put my finger on it, really.

Josh, EH: Pick up any new hobbies during lockdown? And how’s the studio construction coming?!

ENiGMA Dubz: Lockdown made me more hungry to be creative to be honest. I need an extra day in the week to get down all the ideas going through my head! Lockdown brought on a lot of projects for my family and I in the garden and house, so it did help me hone my DIY skills, and also expand my tools in the shed!

That leads nicely to the studio build, as I built all the acoustic treatment myself. As of February this year, I moved in and I’m finally working from it. I’m currently sat at my desk working on this interview with some dope ambient music in the background, sounding so good through my Genelecs in this treated space. I feel very blessed to be in here at last!

Dariel, Electric Hawk: If there’s one main takeaway for listeners to have as they dive into this world of the new Awakening album that you’ve created, what would it be?

ENiGMA Dubz: Ultimately, I’d love to connect with people through my music. I get messages from people who have been emotionally moved, from other creators who have been inspired, and also from bass heads getting their bass faces on. To reach people like this through sound is my number one goal. I feel extremely blessed to have the passion and creativity running through my body day in, day out.

Listen to Awakening, the latest full-length album from ENiGMA Dubz below! Stream on all platforms here.