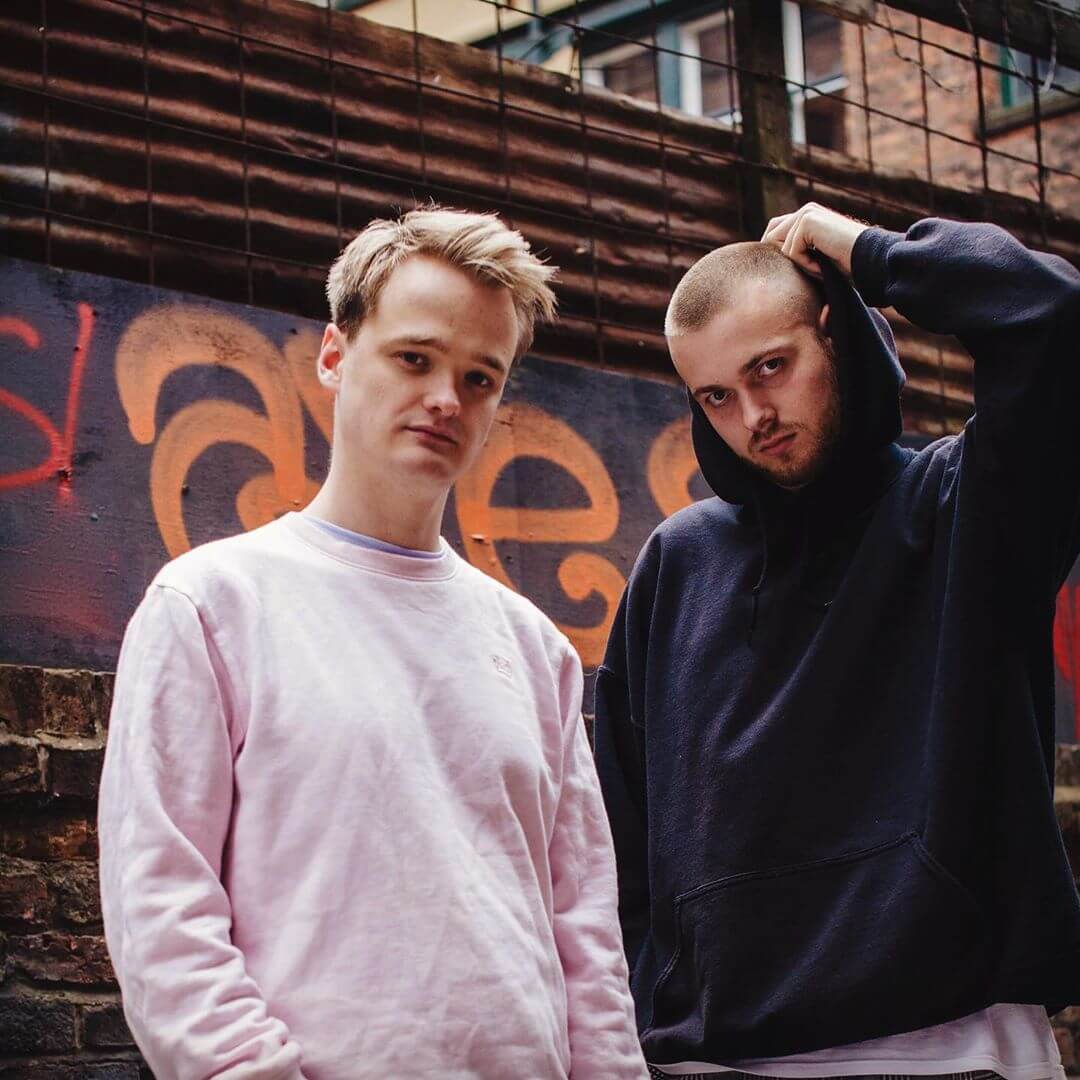 By Connor KyleAugust 17, 2019No Comments

As much as I already loved Duke & Jones for their incredible catalog of unique trap songs, and insane mixes they’ve released, I’m officially a stan after getting to chat with them about a whole bunch of topics from their creative process to their musical inspirations.

If you’re unfamiliar with the Manchester-based duo, it won’t be for much longer once you’re obsessed with their new remix of Marshmello’s “One Thing Right” feat. Kane Brown.  Twisting the original pop-country hit into an emotional and gorgeous future bass track, this latest release joins a growing list of incredible songs remixed by Duke & Jones, a list which already contained the likes of Zeds Dead, Dillon Francis & Alison Wonderland and more.

I’ve been on board the Duke & Jones bandwagon for a while now, and recently confirmed my seat on said bandwagon with the release of their hauntingly beautiful track “Vacancy”.  One thing I love about Duke & Jones is their unpredictability from track to track, boasting the ability to switch between theatrical and melodic themes in songs like “Feeling For You” and the new “One Thing Right” remix to weird, bass-heavy bops like “Surrender” and “Fracture”.

The duo released projects on Circus Records ( their debut EP Eclipse), Deadbeats (their Dystopia EP and various tracks) and most recently dropped their latest project, the Paradox EP on Barong Family.

I reached out to the trap duo to ask them a few questions about the new Marshmello remix, their creative process and writing songs, working with the Deadbeats team, and more, and they couldn’t have been cooler and more willing to answer my questions.  As if I needed another reason to be a fan of theirs aside from the awesome music they make.

Electric Hawk: You guys have released killer remix after killer remix within the past year, remixing the likes of Zedd, Alison Wonderland & Dillon Francis, Zeds Dead, Louis the Child, Yellow Claw and now Marshmello.  For those of us on the outside of the industry, how do these remixes come about?  I’d imagine it goes something like “Hey since you guys have murdered every remix you’ve done, here are the stems to my track. Go crazy”. But how will you guys generally start working on them?

Duke & Jones: Most of the time we’ve been hit up by the artists. The Alison Wonderland/Dillon Francis one was one we actually chased though – we noticed on 1001tracklists that Dillon had been supporting a bunch of our stuff, so we found an email and shot our shot. Zedd had been checking out our demos for a bit, and loved RUST, so hit us up to remix Happy Now. That dude is scarily quick at replying to emails.

In terms of how we go about them, we usually just take the acapella and go from there, making a new break. Quite often if it’s a pop song in a major key, we’ll redo it in the relative minor to make it a bit more dark and moody. We tend to be pretty linear producers, in that we’ll start at the start and do it section-by-section, rather than going straight in with a drop idea or whatever.

EH: I’m relatively new to the EH team but I know that pretty much everyone here is a huge Deadbeats fan.  You guys have done a ton of work with them now from releasing various tracks and your Dystopia EP on the label, to your Zeds Dead remix, and even having multiple guest mixes on the radio show.  What’s it been like working with Deadbeats? How did you guys start working with them? What was your first introduction/interaction?

D&J: As far as I remember, the first time we got in with Deadbeats was when we were shopping around for a label to release ‘Tusk’, which I think was around late 2017. They’re a really great label to work with, always on it with the emails (s/o Harrison!). It’s really cool that they’re so focused on giving fresh talent a chance like blanke, LICK, and DNMO. We are massive fans of the artwork we get from them too.

EH: You guys are capable of producing such a wide range of sounds and themes with each of your tracks, going from bass-heavy tunes like “Surrender” and “Fade to Black” to the gorgeous and more emotional “Feeling For You” and “Vacancy” (I’m obsessed with Vacancy.  I’ve had it on repeat the entire time while working on this post). Being that each track is so unique, what does your creative process generally look like?  Do you guys have an idea for a track in mind and then try to make it? Will you guys just start sound designing and then go wherever the idea takes you?

D&J: Ayyyy thanks man! In general the only idea we have at the start is whether it’s gonna be a hard track or a chilled one. Usually we have a rough idea of which ballpark genre it’s going to be in. Beyond that, though, we do just start making sounds and see what happens. The element of randomness in that is pretty creatively important, in case your ‘ideas’ are actually subconsciously similar to other things you’ve heard. As with the remixes, getting an interesting vibe in the intro with some atmospheres and cool sounds is really helpful, both in having an idea to push forward with, but also something that already sounds good, so it’s less tempting to quit and start something else.

D&J: Musical influences is actually a tougher question than it seems, given that we’ve been producing together since we were teenagers and have gone through a lot of styles since then. I think we agree that our evergreen inspirations are Sub Focus and Diplo, who both have quite a wide artistic range. GTA would also be in that category. Skrillex kinda goes without saying. When we make chill stuff, Fabian Mazur’s music and tutorials have informed our approach quite a bit. All of the above would be dream collabs. Droeloe would be another amazing collab – their style is so unique and cool, and also pretty minimal. Plus, from a personal/technical point of view it would be fascinating to get a look at their stems. More on the trap side of things, it would be great to work with TYNAN – we really admire his drops. There’s also soooo many vocalists we’d be hugely excited to work with. It’d be so much fun to make a trap banger with Rich the Kid and MADEINTYO on vocals, or some alt-pop with Oliver Tree, or straight-up pop with Tove Styrke. If a genie gave me a wish I’d use it on an Ariana Grande collab.

EH: While we’re sort of on the technical side of things, I saw you guys post a few clips to your Instagram the other day, using Soundtoy’s Crystallizer.  What’s your favorite/go-to plug-in right now?  Do you have a reliable plug-in that you use on most of your sounds?

D&J: For producing, iZotope Trash makes it so easy to make ridiculously nutty basses or leads with distortion, just by flicking through and tweaking the presets. Another key to our sound is Space Designer, the stock Logic reverb. It blows every other DAW’s reverb out the water, and we use it on probably 75% of the sounds in any given project. We recently bought the SoundToys bundle, and there is some incredible analog-modeled echoes and delays in there that we’ve started abusing in songs too. It’s also got some stuff that’s really useful for mastering. Decapitator, their analog saturation plugin, is fantastic for making crunchy drums. Obviously, we make trap, so there’s a fair amount of OTT going on as well.

EH: Thank you guys so much for taking the time to answer my questions! Looking ahead, what’s next for Duke & Jones? Any releases coming up or projects you guys are working on that you want to mention? You guys have obviously been cranking out tons of new music the past year, can we expect any shows to see these tracks live anytime soon?

D&J: We just sent in the masters for a new EP which will be out very soon, and we already have another EP in the mastering stage after that. There’s going to be a lot of music out over the next few months hopefully! We’ve also got some tasty collabs in the works, although we can’t tell you who with as of yet. Shows-wise, we’ll be Stateside this winter, probably with some European dates to warm up. The details are being ironed out, but it’s all in the works!

A huge thanks to Duke & Jones for taking the time out of their days to answer my questions and make my first post with EH so much more interesting. They were so awesome in answering messages and their willingness to work with me on this. Keep an eye out for those EPs they teased, and be sure to catch them in Chicago this December on the Deadbeats tour. Enter Electric Hawk’s giveaway to even win tickets to the show! Also make sure you check out Duke & Jones’ new remix of Marshmello’s ‘One Thing Right’ below!