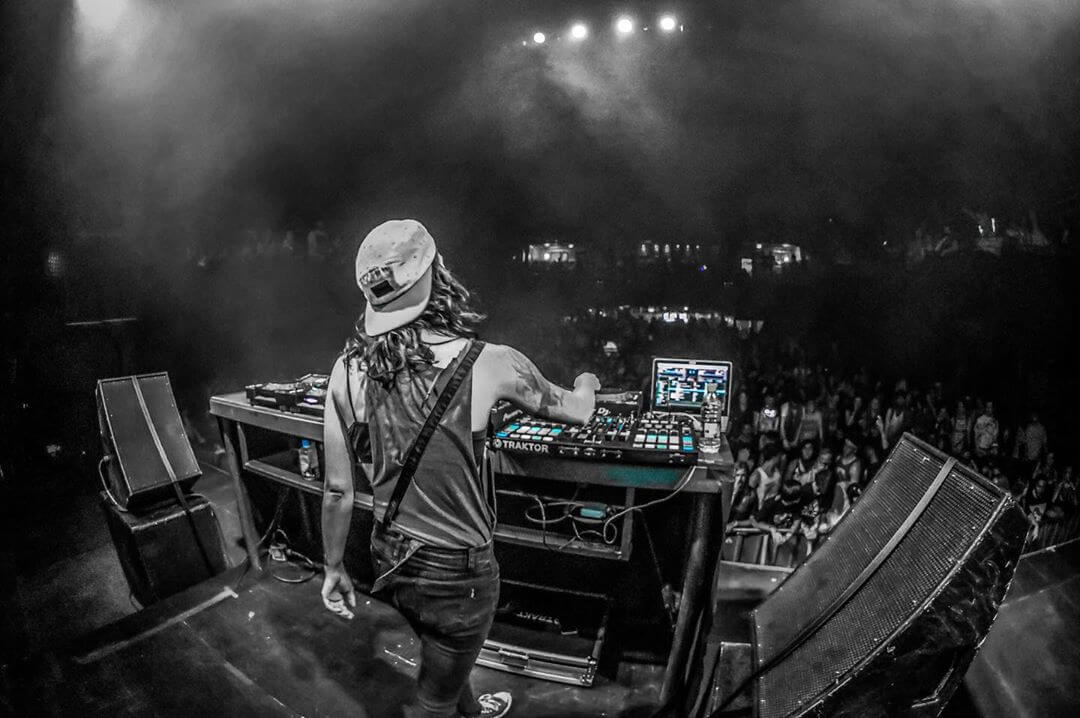 The self described world fusion/ spooky bass tune slinger and multimedia content-creator known as Dozier has quickly become one of Denver’s influential underground artists. Otherwise known as Alex Rowan, she is a renaissance women with a vision. The path of creation thus far has taken her in many different directions, resulting in a variety of artistic abilities and ventures. From the role of story teller, to the duty of engineer, animator and producer, Alex has taken on nearly every responsibility an artist could seek out and seemingly brought  an impressive and accomplished creation into the world each time.

Her most recent brainchild, ‘Quadrivium‘, is the culmination of all these skills. The genre bending release weaves a tale of adventure by fusing written word, hand drawn and computer rendered animations, and music (to elaborate and fill in the gaps). As the story begins, the viewer is immediately plunged into a dystopian world alongside freedom fighter Hestia, and joins her on her mission to give power back to the people. Set in a undisclosed era, the story threads themes of mass societal oppression being just over the horizon, alluding to parallels in our own society.

As a piece of art made up from multiple mediums, each part of the project influences the others, resulting in a type of gestalt. The influence of the music on the story dances a fine line between playful, and powerful and through the effort of combining the best parts of each medium Dozier has accomplished a feat that few others have; a musical release with a storyline and accompanying visual aid encapsulated in one package. And thats putting it objectively. By using techniques such as sampling dialogue from the story within her unique brand of sonic delicacies, Dozier effectively reinforces the emotions that she wants the plot to elicit. When the mood changed the music followed suit, iterating the focal points, emphasizing the desired emotional response and progressing the plot.

Track 2/ Chapter 2 “Bring it Back” is a prime example of this as it transitions from mysterious to dark and heavy, in cohesion with the sinister development of the mission. As the antagonist is introduced, the first inklings of his plans are revealed. Hestia has stolen a valuable possession from him, and as he tells his bounty hunter to “bring it back”, a corresponding vocal sample hits simultaneously and the transition is complete as the beat drops.

The momentousness of this project leaves me struggling to describe it because once entirely absorbed, it became so much more than the sum of its parts. The overall theme cannot be grasped by experiencing just one aspect of it alone, which is why I hesitate to refer to the project as an “EP”. However, to reduce it to the moniker of “a graphic novel with music” would also be a slight (in my opinion) and so in an effort to make humane the fantastic and wrap my head around the phenomenon that is art in general, I sit here today stumbling through the english language. It is my hope that through this article, I have relayed the significance of this release to the art music community at large.

Check out the interview below to learn more.

EH: What can you tell us about your most recent release, Quadrivium?

AR: [laughs with exclamation] That it was quite the endeavor!.. I really wanted to combine my story telling experience and passion [with] music and do like, a sound track to this art piece-story I wrote. And then as I was planning it out it turned into this huge project where I’m gonna release like a new chapter every three months and it make longer and a little more interactive, in terms of how people consume it. Down the line get into some VR stuff and some holographic kind of art deal.. Its a huge project, but it i’m really stoked cuz now it gives the Dozier project more purpose.

EH: Was this your first multimedia project?

AR: I mean I’ve done videos to some of my songs before.. but never anything that has had this amount of longevity and is kind of a full package. My goal is to get to Eprom level… Hes become a Cinema 4D master now and recently did this full 3D music video experience called Drone Warfare and I highly recommend checking it out. But yea, I want to keep the comic vibe that Quadrivium has, but eventually wanna do something in Cinema 4D and do some crazy like, Beeple stuff but with a soundtrack.

EH: What were some specific challenges you faced during the creation of Quadrivium?

AR: The art. That was the most challenging. ‘Cuz i went through a lot of different concepts for what it was gonna look like. Cuz I know i wanted to do something that wasn’t just… typical animation. [I wanted] to use conceptual shit in the art to transition through scenes.. something that was fringe.

EH: What would you call this type of project?

AR: I don’t know! [laughs] It was really hard when I was coming up with idea… How are people gonna consume this, how am I gonna present it? And then it was a week before I was gonna drop it and Im very masochistic sometimes with my art and i’ll be like ‘this isn’t good enough!!” and I’ll throw everything away… so all the art you see in there was done like, a week before. And i work really well under that kind of pressure but… it drove me insane.

EH: How would you incorporate this into your live show?

AR: Well the visuals I have from the art pieces… finally have an aesthetic that represent a lot of the sounds of my music. I really like that noir kind of aesthetic. My intention with those it to take out some of the dialogue so that different panels can be played with tracks that they don’t necessarily go with in the video. Probably glitch it in certain ways with After FX. I’m trying to step away from traditional Djing and do more live performing with Ableton and my push, so that would be tight to put all that together.

EH: So what attracted you to the dystopian theme of Quadrivium?

AR:  I’d say its kind of reflecting part of the cycle that we as a society are in right now. For me, throughout the whole story of Quadrivium and the whole overarching theme [of my albums] is to start to speak about these esoteric ideals that I believe in. I communicate those in this visual and auditory way  and I wanna present them in a way that isn’t preaching… or ultra hetti. Thats what we did in ancient times, talk about complex subjects through story and art so I wanna do that again, but in a modern way. So the dystopian part of that is to represent that “hey. were at the end of a cycle.”

EH: What motivated you to pursue creative outlets outside of music?

AR: I wanted to make something that you could interact with that touches upon all the areas of [different mediums] without losing quality.. that was a whole immersive thing. Because at this point what is it, twenty-nineteen? We need to do be doing better for ourselves.  We have the technology, why continue to consume and support shit from these corporations that push carbon copy entertainment media, when we could be pushing art in its most genuine form?

EH: As a women in the industry, what changes do you hope to see in the near future?

AR: Just more representation.. on Festival line ups, management.. Just the whole area. The music industry i think needs to be more balanced. Im not saying, like, “women need to take over!” no,  we need balance. Thats what I wanna see. The collective I’ve been working on did an event earlier this year.. We wanna do workshops where we can showcase more female artists and their skill sets so I think that would be a dope thing to experience.

EH: Do you ever find yourself being discriminated as a women in the industry? If so, what do you do?

Dozier (AR): Uhm yes.. If so, it goes two ways. I’ve gotten “oh, she only got that booking cuz she’s a girl” … or there’s been other times where I don’t get booked for a “harder” show, cuz’ they don’t seem to think a girl can throw down enough for that genre.

EH: Do you see progress with these issues in the Denver Community?

Dozier (AR): I’d say In the Denver community specifically, yes. We do have a lot more opportunities, especially recently. Whats great about the female community [in Denver] is that everyone I’ve met is all about supporting each other. Crews like Fosters of Frequencies, The Black Box and our collective The Divine Feminine Movement are pushing the envelope in terms of building up female artists, and its a real exciting time.

EH: Who are some female artists that you think your fans would benefit from checking out?

EH: So earlier in the interview you described yourself as a masochist. Could you elaborate on that?

AR: I’d say in terms of what I take on my plate and the procrastination I put myself through… There’s a lot of times where I’m finishing the songs hours before I said i was gonna drop it, or doing the mix that day.. Not as much recently but I did plan three months for ‘Quadrivium’, and ended up scrapping the art and doing it all the last week. So.. there’s that.

To bring this self styled verbal maelstrom to a close, I’d personally like to emphasize how the merging of art and technology is opening up new avenues of exploration, and creating new culture along the way. I believe that Quadrivium signifies this shift in artistic perspective, through it’s many facets and melding of mediums, and that we can expect many more projects similar to its likeness in the near future. The merging of arts and technology is not necessarily a new phenomenon, but the ability and technological access for an underground bedroom producer to culminate such an endeavor certainly is. The future is bright my friends.

“Quadrivium” is available now on Soundcloud, Spotify, Bandcamp and iTunes. The project can also be acquired in its entirety (with accompanying video animation) by contacting Alex Rowan AKA Dozier directly. Stay tuned for more from Dozier and don’t forget to catch her this summer!!