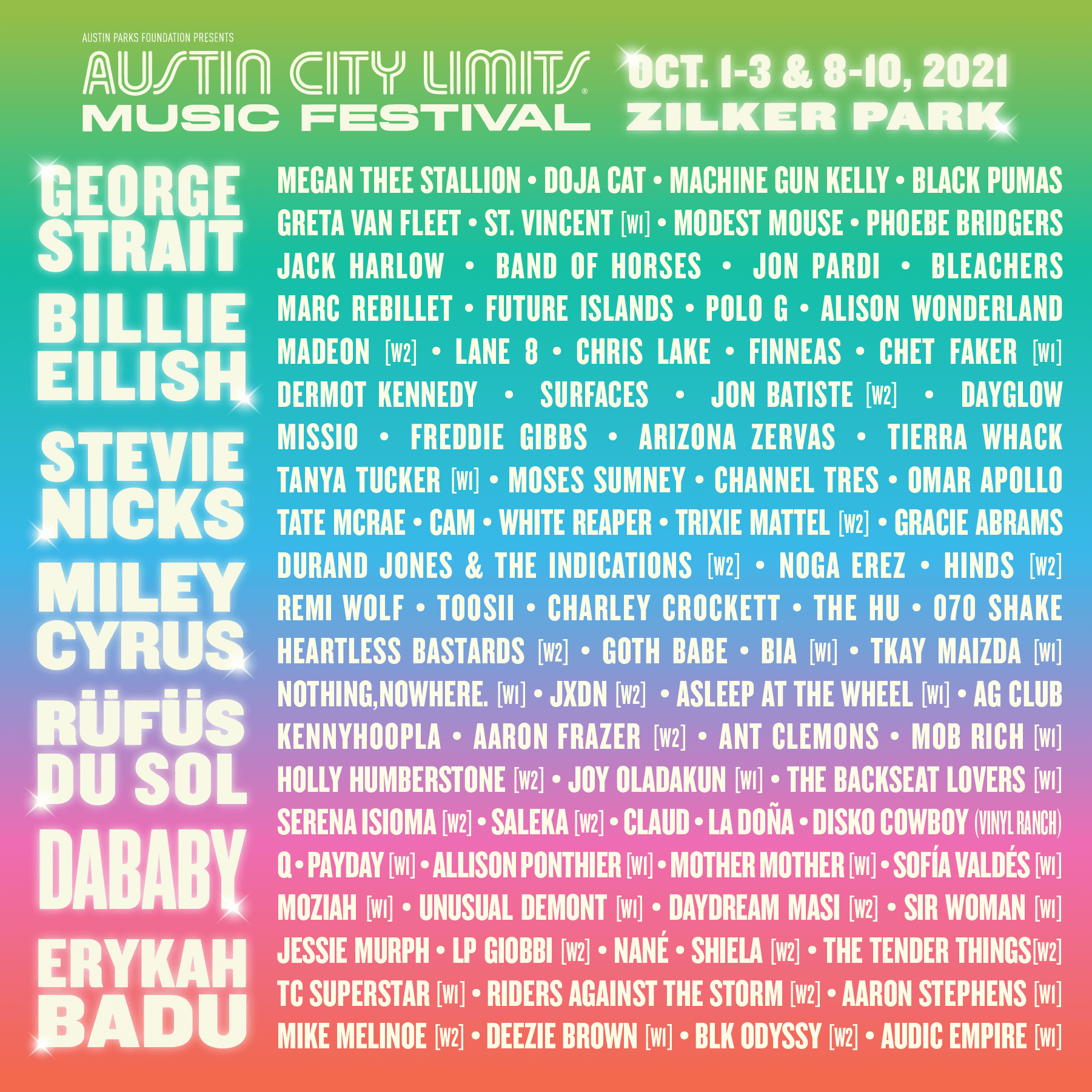 We regret to inform you that both weekends and single-day passes of Austin City Limits have sold out. Womp, womp. You could blame a year off festivals for that, or maybe the ill list of headliners. Look we may not all have interest in country music, but you cannot deny the fact that George Straight is a legend. Pop queens Miley Cyrus and Billie Eilish make the list, with addition to the Queen of Rock herself Stevie Nicks. Landslide B2B Innerbloom live because the indie-electronic trio Rufus Du Sol tops the bill too.

Put on by C3 Presents, the sold-out event will take place on the first and second weekend of October. ACL consists of eight stages and an assortment of genres stemming from rock, indie, electronic, hip-hop, country, and folk. Like most city festivals, the food vendors carry local favorites and offer vegetarian/vegan options. ACL is exceedingly family-oriented. Believe it or not, most Austin school districts have the following day off after the festival so families can enjoy the long 3-day weekend. Shout out to rad parents for introducing the powerful realm of music with their kids.

So who makes up the ACL roster this year?

Up first in the electronic music category, fans will boogie all weekend with Lane 8, Chris Lake, Madeon, Channel Tres, and Alison Wonderland. Indie-alternative and singer-songwriter lovers get the sweet taste of Chet Faker, Dermot Kennedy, and KennyHoopla. Meanwhile, hip-hop queens Doja Cat, Erykah Badu, and Megan Thee Stallion take over the stage, having all the hunnies dropping it real low. But let’s face it. ACL sold out the way it did because everyone and their mom want to hear “Float On” live from Modest Mouse.

Dating back to 1974, ACL has grown its roots by becoming the longest-standing music program. Back then, it covered bluegrass and country but later led to showcase Austin’s various mix of blues, folk, and psychedelic rock. The program has now hosted everyone from the Foo Fighters, BB King, Kendrick Lamar, Bon Iver, and Explosions in the Sky. What started as a television program and led to a festival, now consists of a Rock n’ Roll Hall of Fame concert venue, the ACL Live at the Moody Theatre.