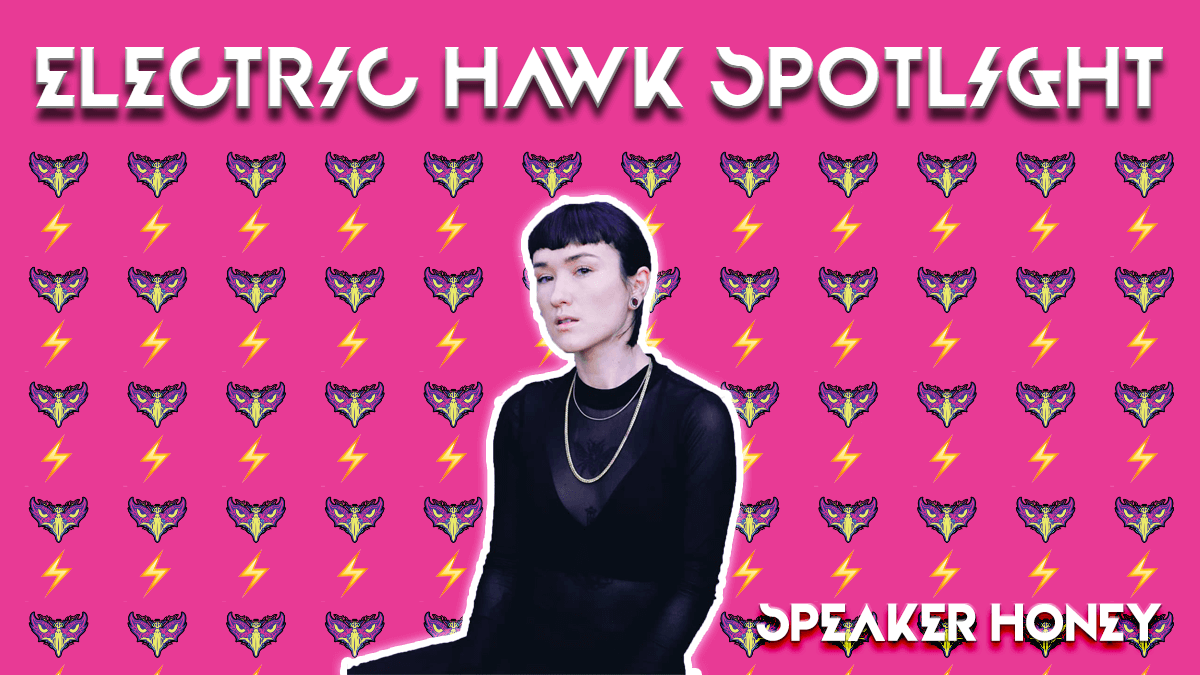 Since it’s inception, mau5trap has always been a favorite label of mine. When I was presented with the chance to interview one of their new artists, Speaker Honey, I jumped right on it.

She was playing the afterparty for the Deadmau5 Cube V3 tour in New York City. After a hotel booking and a four-and-a-half-hour drive to Brooklyn, I was ready to see her mix live for the first time and have a chat.

Kirsty Parker, an American-Canadian producer, created the Speaker Honey project to showcase her unique blend of techno and electro. I wasn’t super familiar with her discography other than her release ‘Shoyu.’

This dropped in 2019 on the mau5trap album We Are Friends, Vol 9. Therefore, I dove into whatever else I could find. Channeling my inner Sean Evans, I did a deep dive into her Instagram for content.

Since I had an hour-long drive on Long Island the day of the show, I used thst time to research her SoundCloud and put on her ‘Magic After Party Mix.’ As I entered the city’s traffic, this amazing tech-house mix kept me calm and focused.

After her set, I made my way through the labyrinthian hallways of Avant Gardner to her green room trailer. Her publicist (thank you Molly) set all this up so after some small talk to break the ice and me struggling to locate my pen we got right into my interview questions.

Andre, Electric Hawk: So you are new on the mau5trap label, you just did ‘Shoyu’ on WAF Vol 9. How did you get in touch with mau5trap?

Speaker Honey: So it was actually a funny story. I started DJing three and a half years ago. So I’ve been producing for over ten years, but I started recently DJing. I had a friend from elementary school, from Orange County, hit me up and was like “omg you’re DJing you’re playing a show near me. Let’s connect,” and I was like “Jordan, what’s going on? That’s awesome.”

So we met at a bar, it ended up being No Mana [Jordan]. He sat across me in elementary school. After that we reconnected, and then [we did] again 2 and a half years ago. Miami music week they were playing a mau5trap takeover at the Treehouse party. He invited me and that’s where I met Mario (mau5trap label manager) and a bunch of the other artists. I stayed in contact with Mario just through the internet.

I knew with my productions, that I was really sensitive to which label I was gonna choose to send them to because its a really big thing. Kind of like an all-in, full investment. I want to have a label that I actually stick with. And mau5trap just kept kind of proving over the next two and a half almost 3 years to be a label that would really fit my sound and also help support me as an artist in the ways I’m looking for. So then last summer, I finally decided to send them some of my tracks and they actually took them.

Andre: That’s awesome, so you performed at EDC two years ago right, with Cats and Boots?

SH: Yeah uh on the Boombox Art Car—so that was uh 2018. Yes, 2018. That was also, so my whole DJ momentum kinda just built itself really really quickly. That’s also when I started DJing 3 years ago like November. Each show turned into another show! Eventually, I realized like this is for sure. This is very natural. And I quit my office job like a year and a half ago.

Andre: Where did you work in an office?

I was a manager at an IT company *laughs* so it’s at the point where I’m playing after-hours in Vegas and I’d get home and have like an hour and then I’d have to go to work which is not healthy and like this is, I had to choose to fully do something and like my music is gonna be it.

Andre: That was Dark Nights at the Sahara Lounge [Las Vegas nightclub]?

SH: Yeah it was Dark Nights. It kind of came naturally to me choosing techno sounds. And that’s kinda my natural taste so when I started playing it out in Vegas, I didn’t realize that was actually, something that was semi-unique. There’s not many that people at that time playing techno in Vegas.

There’s Mantra and like Techno Tuesday, but I wanted a night that I could just go as hard as I wanted to. Like really go in as if it’s day 2 at some cool rave or wherever. [I did] not feel limited to be the opener, they have to be sensitive of when you play techno and how you play techno. So that’s why I started Dark nights.

Andre: I saw you went to Burning Man, how many years have you gone?

SH: Yesss, so I’ve gone six years and this is gonna be my seventh this year. So Burning Man has been a huge influence on my life for sure. The first time I went it was 2013. My best friend Tara—from when I was 13-14 years old—was one of those kids whose parents took her as a baby. She went like 4 times before she was seven, so when I met her it was a big part of her life. She was really into this whole influence she had from Burning Man and when we were 19 in 2013 she bought me a ticket and was like “were going.”

So we literally had like just a tent, no f***** easy up, no chairs, like literally just had a tent for the night and we had the best time. Ever since then every year, it’s gotten better and better and we are more prepared.

Now we are part of a camp that has an art car, the Lions Den, they have a whole sound system. We can go up whenever we want and DJ. I also DJ’d at Celtic Chaos, they’re a group from San Francisco, and they have actually a massive array rig with big, big, big sound system and they are right on the esplanade of Burning Man. So when you’re DJing there you’re facing like just the playa and the art cars.

Andre: You and Jordan (No Mana) reconnected and are now on tour together, how has that gone?

SH: So my boyfriend and I met him in a bar and he was like, “I’m No Mana and I’m on mau5trap. I’m on tour with Feed Me,” and we stayed connected. He played for New Years for the Eclectic Zoo party in Vegas I think a year after that.

We reconnected at that again but anyways there were multiple shows where we just reconnected. Like in Miami, I hit him up at the mau5trap party. So it’s just been every six months or so just meeting him at an events and it’s funny because Mario didn’t know that that was a connection that we had. My whole identity with the label has been my own thing, my own energy. The idea to open for these No Mana tour dates was just a serendipitous event, it wasn’t planned.

Andre: I’ve been trying to listen to as much of your music as I can. I put on your Magic After Party Mix during a drive and I loved it.

SH: Thank you and you know what’s special about that mix is that so right when we first moved to San Diego we went to the Desert Hearts Halloween party. And this was a year and a couple months ago and basically Lee Reynolds had some people over for an after-hours at his house.

This is the first time I’m ever at Lee Reynolds home and no one was on the decks. So I got on the decks and I Dj’d for an hour and a half. And my flow was just so natural that I went back the next day and I looked at my history and I recorded the exact same tracklist and that is my Magic Party Mix. That was the first time I ever went back and re-recorded a mix that I had done because typically all my mixes are free-flow and natural.

Andre: So your Night Visions EP comes out in three days, the 11th. What kind of message are you trying to get across with it?

SH: My main vibe is just raw passion for the moment. I really want my music to project a sense of “yes, this is it, this is life, this is what we’re doing.” And I tried to integrate an underground sound and make it more accessible. I have a pop background too so being able to integrate the underground with pop and try to fuse it together… every sound that I choose in my songs has a significance. Even if it’s just a high-hat or just a little clap. I really don’t like busy sounds and I don’t like things being too emotional or too moody. I kinda like to teeter on that boundary between “it’s almost gonna hit your feelings,” but then it comes back. It’s just in that whole page of “I’m here right now. I’m feeling good. Positivity.”

My track “2020”, the main concept for that was the idea of coming into a new decade. I know where I want to go with my creativity and my art and my path but also that its dark and I actually don’t know. It’s like this feeling of positivity but then also the unknown. And knowing that just like I’m taking back the authority to just like step into it. That’s why I called it Night Visions. Stepping into your path, your destiny, but its still unknown.

Andre: Where do you see your vision taking you? You said you wanted to stay with mau5trap obviously. But do you see yourself investing in production or just keeping the warehouse vibes?

After the last question, the audio wasn’t very clear on my recording, the inside of her trailer was loud with (rightful) revels. However, both Speaker Honey and I intimated that this was a first interview for the both of us. We celebrated with a crisp high-five. I’m so thankful that she took the time to talk to me and gave such in-depth responses. I learned so much, and if you’re out there reading this Kiki, you have a fan for life!

Want to get the inside scoop on artists you love? We’re always meeting new people! Check out our Artist Spotlights, coming live to you every Friday.