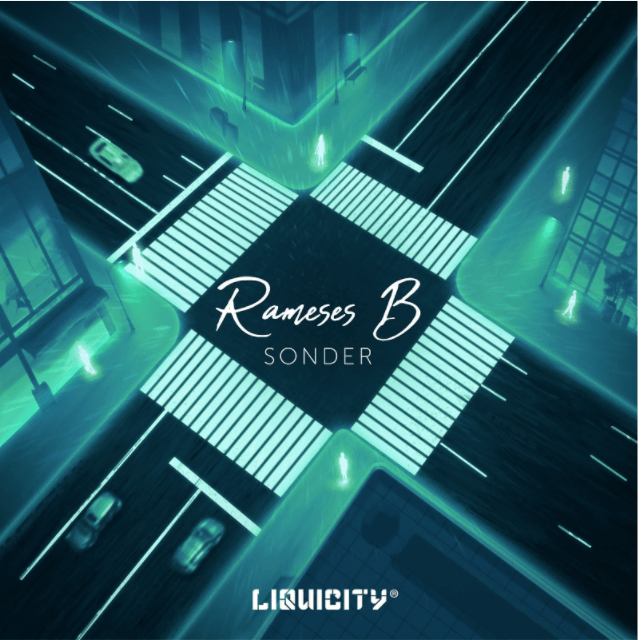 Rameses B has been producing for almost 20 years now. The UK producer, who began releasing tunes in 2003, has touched on several genres, including DnB, trance, and dubstep. With his Sonder EP, the talented Rameses B proves his ability to execute his craft masterfully in the world of liquid drum n’ bass. Featuring vocal work from Veela and Gracie Van Brunt, this four-song EP, released on Liquicity, creates the perfect soundtrack for a myriad of emotions.

While all four songs are within the same genre, Rameses B impresses with his ability to create variety among them.

It is clear that ample amounts of time went into the composition of each track on Sonder. To make things simple, each song can fall under the genre of liquid drum n’ bass, but there are many different complexities within each one. He starts off the EP with the title track, “Sonder,” which happens to be my favorite of the four.

It begins with a goosebumps-inducing introduction. Then, the melody slowly lifts as various ambient noises mesh together. After about a minute, the drums begin to kick in, and the emotional tension builds to a boiling point. Finally, the tune breaks out into the 172, delivering an emotional drop. “Sonder” is so technically sound, with such intricate composition. The sound design is laser-focused, and the use of different elements is flawless. Whether it’s the wet-sounding bass or the perfectly timed hums, Rameses B delicately places each component in its proper location.

Each track has its own vibe – they may be the same genre but they have different characteristics to make them unique in their own way.

Rameses B on Sonder

“When You Dream” is similar to “Sonder” in the sense that it is a flex of sound design skills. With that being said, the mood is different. “When You Dream” is a lot more uplifting and more of a feel-good track. The chorus is sure to produce serotonin for the listener. The subtle “When you dream about me” vocal goes along perfectly with the beautiful flow. This tune is extremely enjoyable and creates a cheery environment.

The back half of Sonder brings out a more dancefloor-induced side of Rameses B.

“Against The Grain” and “Haunted Hearts” close out the back half of EP. Diverging from the emotional first half, these two tracks give off more of a dancefloor feel. With its catchy hook and spirited drop, “Against The Grain” brings nothing but bliss to the listener. Meanwhile, “Haunted Hearts” draws you in with a sparkling introduction. Gracie Van Brunt’s wonderful voice guides us into the drop. It is there where Rameses B unleashes is his heavy drums over a delightful melody, providing a great soundtrack to groove to.

Liquicity is known for releasing top-of-the-line liquid bits, which has been proven once again. As a result, we have come to develop high expectations for the Dutch-based label, and they haven’t let us down yet. With a heavy and emotional start, closed out with a gleeful finish, Sonder makes for a pleasurable listen.

Listen to Sonder, out now on Liquicity:

And if you’re looking for new music, keep up with our weekly Spotify Playlist, Fresh Hunts, or follow us on Twitch. Whether it’s the newest drops from Rameses B, some old school, or underground—we just want you to hear it.