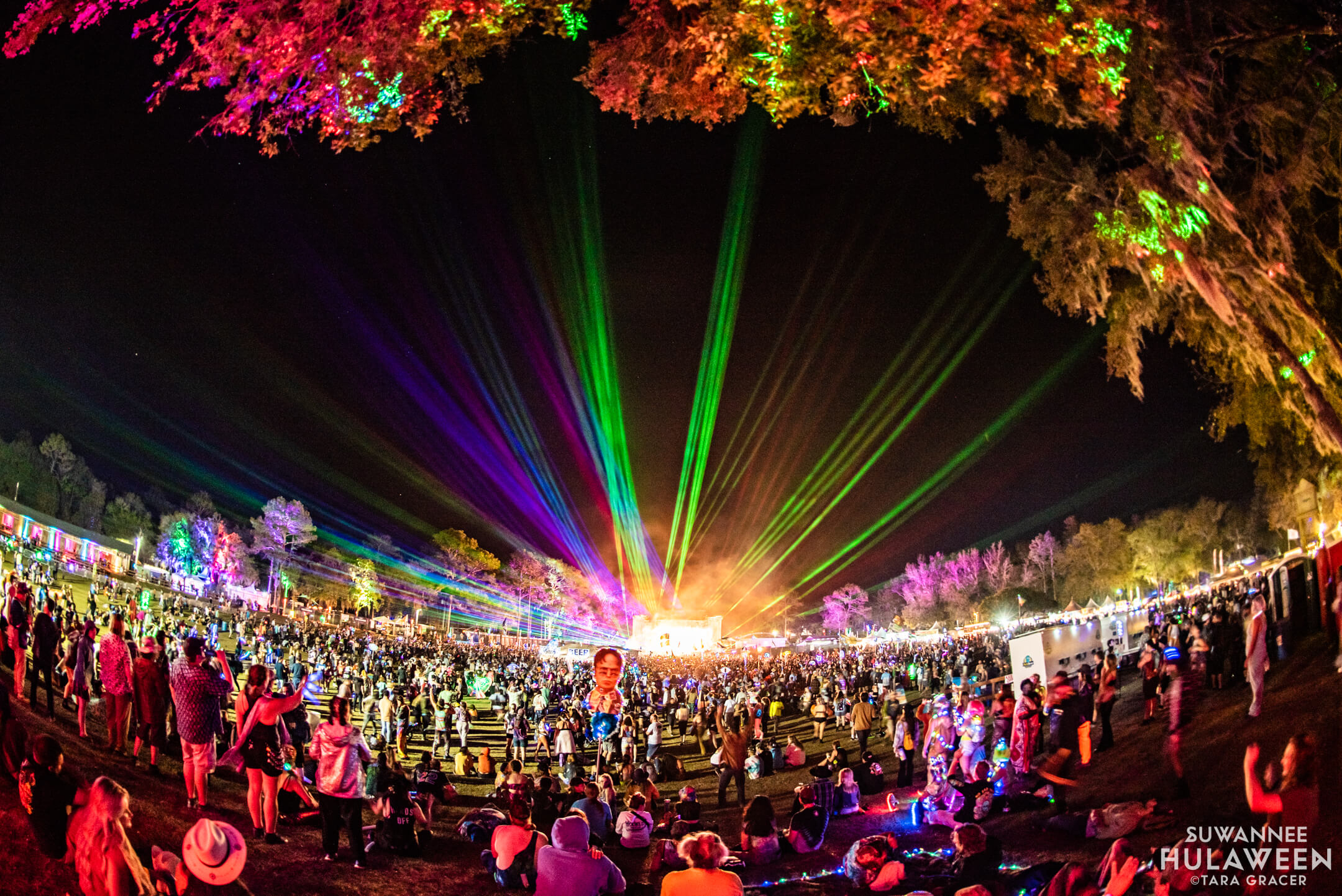 Hulaween 2022 Recap: The Magic of Suwannee Shined Yet Again

Tucked in the wetlands of North Florida is a place that holds a certain indescribable magic. The Spirit of Suwannee Music Park, home to Hulaween 2022 (and all other Hulaween’s for that matter), rests between Tampa Bay and Jacksonville. Every October, it becomes home to tens of thousands of humans, all looking for an escape from everyday normalities. This is one we’ve been waiting months for. Once again, Suwannee provided us with a home for four special days.

The steamy Florida day did nothing to tame the initial energy.

A warm Florida day welcomed the crowd at the gates of Suwannee. The high temperatures did nothing to temper the excitement that burned through the crowd. Passing the famous Busy Bee, the last pillar of reality, cemented your entry into a new world. At that point, every car was bound for the same destination, and that destination was underneath the Spanish Moss of Suwannee.

One of the most special things about these campgrounds is that they are actual campgrounds. Contrary to most festivals, who throw you into an open field and make you fend for yourself against the power of the sun, Hulaween takes full advantage of the beautiful environment it calls home. My group was lucky enough to find a spot tucked in the trees. It provided perfect stomping grounds to protect us from the Florida sun. We threw on our Rocky Horror disco outfits to match the theme (Suwanne Horror Disco Show). Memorized the lyrics to the “Time Warp” and got ready to go. From there, it was off to explore.

Hulaween is different from most festivals, music is on the back burner. The headliner is Spirit Lake.

If you’ve never had the chance to experience Suwannee, give Spirit Lake a quick google search. It looks innocent enough, just your standard Florida body of water. But once a year, it turns into a fairy tale. Resting on a hill behind the main stages, surrounded by walls covered in stunning paintings, is the Spirit Lake area. Walking in, especially at night, is overwhelming in the most amazing way. To your right sits the Spirit Lake Stage, hosting a variety of different genres over the weekend. On the left, is the jaw-dropping setup for Frick-Frack Blackjack. Then, you are led by a “Mural Maze”, attracting blown-away festival-goers like moths to a light.

Once you pass the crowd admiring these displays, a sightline opens up to make the rest of the area visible. The view is mind-blowing. An endless field of fire, lights, and artwork pack the Spirit Lake grounds as people skip around in joy and wonder. On top of non-stop art attractions, were 2 stages, including the Incendia Stage, that hosted a Player Dave and Eazybaked b2b among other special performances.

The secrets that trickle throughout the festival grounds is one of the best parts of the experience.

Besides the surprising performances at the Incendia stage, which are only spread via word of mouth, there are other little secrets sprinkled throughout Spirit Lake. There is a secret third stage if you are lucky enough to stumble on it. As well as a scavenger hunt that led to who knows what, and other artistic gems that you could only find if luck came your way. At Hulaween, you never know what you’ll stumble upon next. That is just part of the magic. The Spider Butt is my favorite…if you know, you know.

Trying to describe Spirt Lake with words is an impossible task. Even pictures don’t do it justice, it is simply something that needs to be experienced. If you’re not careful, you’ll get lost. But at Hulaween, getting lost isn’t such a bad thing.

While a lot of time was spent getting lost in Spirit Lake, the music was absolutely top-notch.

The fun started Thursday. Hula kicked off the weekend with a heavy dose of electronic music, featuring plenty of house on the two main stages, “The Hallows” and “The Meadow“; while a Wakaan takeover took place on the “Spirt Lake” stage. Gorgon City was the highlight of the early evening for me, dropping some uplifting house tracks chopped with inspiring vocals. Then as we crept deeper into the night, I wandered over to the famous Amphitheater stage, where Twiddle and The Disco Biscuits absolutely stole the show with their jams. Following the biscuits, I was able to catch a bit of the world-renowned Fisher, who pleasantly surprised me with some darker techno bits.

The party started right away Friday with A Hundred Drums taking over the Amp in the early afternoon. She turned up the temperature on an already hot day with some spicy dubstep. Later that day, we got blessed with the first of six String Cheese sets on the weekend. Cheese, into Opiuo, into Cheese round two was a magical experience.

The late-night started up with a thunderous performance from Portugal the Man, opening with a Metallica cover to really set the tone. Clozee cooled us down after, and Chet Faker guided us to dance the night away with his house-centric DJ set.

With Player Dave kicking off Saturday at 2pm, the second half of Hula was off to a roaring start. It was the perfect way to set the tone. A beautiful cloudy day, with the soothing bass of PD, finished off with some liquid D&B made for a perfect set. The bass party at the Amp continued with Eazybaked and Of The Trees crushing their sets.

Meanwhile, The String Cheese Incident played three (!) times on Saturday. They finished off the night with their famous theme set, hitting covers of “Psycho Killer“, “Staying Alive” and Rocky Horror Theme Show’s, “Time Warp“. Hands down the set of the weekend.

That rolled perfectly into the psychedelic masterpiece that was STS9. Sound Tribe came out swinging, and absolutely melted the Amp. As we collected ourselves from the magic we had just witnessed, the crowd migrated to Spirit Lake to explore and catch more tunes. A house set from LP Giobbi to close it down, along with the jams of Leftover Salmon made for a perfect Saturday night.

Sundays at Suwannee are for winding down. With a less hectic music schedule, we caught the final Cheese set, some funk from Cory Wong, and a full slate of house from the Desert Hearts crew. The main stage was closed out with two hours of Joe Russo’s Almost Dead, a memorable finale to the weekend.

Hulaween 2022 was a special one, and we can’t wait to be back next year.

As always, Hulaween acted as a temporary release from the daily stressors we collectively shrug off. It was a weekend of free-spirited fun. Judgement was nowhere to be found as people hopped around freely in their lovely costumes.

To sum up Hulaween into a single recap does not do it justice. The efforts of all the artists and organizers to provide this magical weekend for us deserves recognition. From the large aspects, like the crisp sound and eye-capturing production emanating from the main stage to the little details meticulously crafted in Spirit Lake, it seems everything was created with purpose. If Hulaween is not on your list, add it immediately, and do everything you can to make it out. If that’s not possible for you, I hope this recap helped provide a small taste of what it’s like to spend a weekend in the best place in the world. Till next year Hula.