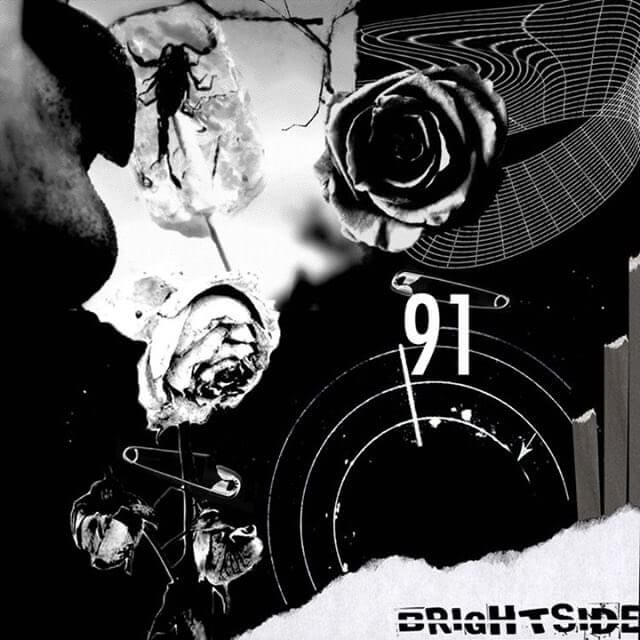 Brightside is a name you may have seen amidst any late night explorations you’ve taken into the underground depths of experimental bass SoundCloud, and if you haven’t seen it, then you’re in for a treat today. Coming off a strong 2018 with some massive collabs such as Hypernova with DeeZ, and Pestilence with Carbon Record’s SubDocta, the man has been well at work.

Although his last EP, In Sheep’s Clothing, was greatly infused in metal and rap influences, Ninety-One does not seem to shy away from the texture filled and controlled-chaos sound design universe that Brightside has been crafting all of this time. While production having started in September, around the same time as the release of In Sheep’s Clothing, he was determined there was a different vision to continue building upon this rather than having individual releases, and over the span of the next few months, Ninety-One was born.

Chaos yields beautiful uniformity in this 4-Track EP, especially with the debut single, Space, which seems to quite literally envisage the feeling one might imagine in that very setting. The intro looms with horror-like synths, and kicks off the EP with hair-raising and adrenaline-pumping tune with a vast amount of detail carefully placed throughout the song, similar to a G Jones track.

Babylon is a stomach churning hitter that has a booming atmosphere to it, one you might be scared to be caught by in fear of sinking into it like a black hole. The hip-hop influence also shines brightly on this banger.

The final two tracks, Necktie and Higher, is where things start to pick at the brain even harder than before, both vastly rib cage rattling and haunting. Necktie ends in an ominous sample that perfectly transitions into Higher.

“Necktie is almost completely different from when I played it out for the first time. It ’s come a long way and so many little changes but the whole time I was producing it I heard the vocal sample from Higher and knew it had to transition somehow..”

We then asked about the vocal sample you hear at the end of Higher to close out the EP.

“That’s actually my good buddy Honeycomb, every EP has had some sort of vocal sample from a friend or family tying the narratives together :):)” – Brightside

Brightside is starting 2019 off with a bang, and at this rate, we’re probably going to be blessed with much more music. Don’t be surprised later this year when you hear the crowd at an event screaming “WHAT IS THIS?” and you damn well know what it is, it’s Brightside.

Lock in for ride. Ninety-One drops on January 22nd.