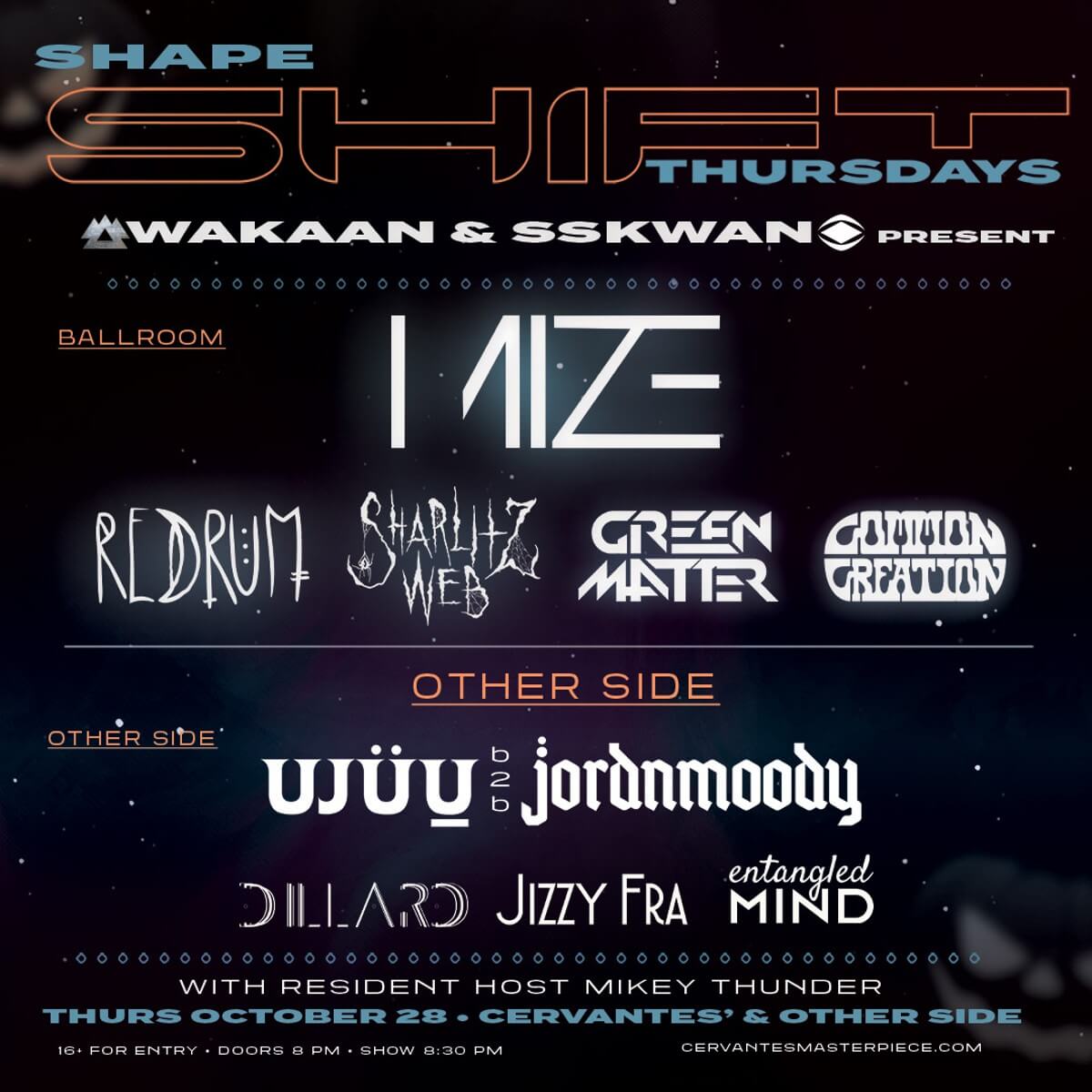 All Hallow’s Eve, the one day of the year it’s socially acceptable to play dress up. The only question is who do you want to be? Personally, I am going to be potato-shaped DJ Potaro. As to where I wish to be on October 28th to prep for the spooky Sunday? None other than the first-ever SHAPESHIFT Thursday brought to you in part by: Wakaan, Sskwan, River Beats Dance Colorado, and Cervantes’ Masterpiece Ballroom. With a lineup straight sent from the heavens – or heathens, a beat for every hour, and a whiskey for every sour, SHIFT Thursdays invites you to leave the house and lose your mind this Halloweekend.

THE PRIDE OF THE OTHER SIDE:
Ujuu b2b JordnMoody
Dillard
Jizzy Fra
Entangled Mind
Mikey Thunder

SHAPESHIFT Thursday on October 28th feels almost prophetic in its timing because Denver will be encumbered with ghosts, ghouls, and GRiZ fans for the funk man’s Another World First Bank Center 3-night run. Halloween Weekend has been commandeered by bass music in the bass capitol, and we love to see it. Denver never sells itself short on the caliber of live music it contains and this week is no different. The collection of artists at Cervantes’ alone on Thursday is enough to make the hair stand up on a black cat’s tail.

Common Creation touches down after coming off his recent EP release with Wakaan, Tiger Blood.

A “Lowkey Kickback” is a wonderful way to describe the vibe of the night, so why not blast it through several thousands watts of bass. Mobilizing all the way from Atlanta, our favorite saber-toothed DJ is finally making his Denver debut. Hold the applause until after he plays his “Breathe” by Pink Floyd remix.

Coincidentally, Green Matter will be making an appearance to thrash her fluorescent hair around whether we like it or not; luckily we do. The Denver-local producer wields explosive bass at her disposal and is not afraid to use it. Prepare for whiplash.

One thing to remember for the night is that even though Sharlitz Web is on the lineup, it does not mean you have to bring the fake spiderweb stuff to metastasize in the crowd. Although, if you feel a divine calling to do so, please indulge yourself. Speaking of indulging, that is about all we will be doing the moment doors open for SHAPESHIFT Thursday, also featuring MIZE, Redrum, Dillard, and more!

GET YOUR TICKETS TO SHAPESHIFT THURSDAY HERE.

Looking for new music? Keep up with our weekly Spotify Playlist, Fresh Hunts. Updated every Friday with all the latest releases. Whether it’s the newest drops from Wakaan, Sskwan, some old-school, or underground…we just want you to hear it.